This article looks at the political, social, cultural and economic center of a region. For further meanings see Metropole (disambiguation) . 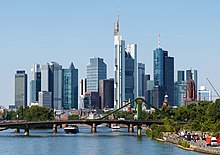 Metropolises (from ancient Greek μητρόπολις mētropolis , German 'mother city' ) are large cities that form a political, social, cultural and economic center of a region or even a country.

Mētropolis ("mother city") called the ancient Greeks the city from which an associated colony was founded. These had a great political influence on the colonies. Due to the city-state structure , these cities were also the political, religious, economic, cultural and social centers of their respective regions.

The Romans adopted the term from the Greeks, but with a slightly different meaning. From Roman times, important provincial capitals of late antiquity were called metropolis . As one of these cities, the Metropolis Trier , for example, was able to seamlessly develop its late antique bloom well into the early Middle Ages .

The term metropolis in the sense of “provincial capital” was adopted by the church in early Christianity and referred to the amalgamation of several dioceses under the direction of a chief bishop. Hence the current official title metropolitan in the Roman Catholic Church and in the Orthodox Churches.

Three definitions can be used for the term metropolis :

Metropolises are therefore capitals or central locations with important functions. The spectrum ranges from the regional economic center (see Regiopole ) to a national capital and international importance, for example as a European capital of culture, or global importance in the sense of a cosmopolitan city.

This meaning can be defined colonial in the sense of the "mother city", or administratively in the sense of a capital. It can also be based on a symbolic reference: Syracuse can be referred to as the New York of antiquity or Dresden as Florence on the Elbe, etc. A relational definition is open and calls for the important functions of a city to be clarified.

Size classification of cities with more than 100,000 inhabitants

The table shows a current current classification of cities according to the number of their inhabitants. Large cities must have at least 100,000 inhabitants.

Global cities are the "nodes" or control centers of the world economy, mainly because of their control and gateway functions. The control function means: the headquarters of globally active companies and organizations are located in a global city. From here they control the affiliated subsidiaries and plants at other locations. The gateway function means: the Global City is a central distributor for the traffic of people, money, information and goods. The gateway function is often associated with a port or major airport. Global cities are a phenomenon of the globalization of the economy and information networks.

If metropolitan functions are distributed over a dense collection of several central locations in an entire region, one speaks of a metropolitan region .

The increasing concentration of business, administration and culture is known as metropolitanization .

In the dependence theory , metropolis is understood to mean the opposite of the periphery or the tricont .

In its 2018 state development program, Bavaria upgraded three cities or multiple centers that had previously been listed as regional centers to major cities .

At the HafenCity University Hamburg , a course in Metropolitan Culture was set up for the 2009/2010 winter semester , which deals with the cultural aspects of metropolises.