This article covers the city in Taiwan. For the city surrounding the urban area, see New Taipei .

Taipei ( Chinese  臺北市  /  台北市 , Pinyin Táiběi Shì , W.-G. T'ai-pei shih , Zhuyin ㄊ ㄞ ˊ ㄅ ㄟ ˇ ㄕ ˋ , Pe̍h-ōe-jī Tâi-pak-chhī  - "North Taiwan city ", Often given in the English spelling as Taipei ) is the capital of the Republic of China (Taiwan) . The megacity in the northern part of the island is the fourth largest city in the country and forms the largest metropolitan area with New Taipei . The area of ​​the city is completely enclosed by the city of New Taipei, which emerged from the district of Taipei.

Taipei is located in a basin at the confluence of the Danshui, Xindian and Jilong (Keelung) rivers . While the Danshui and Xindian Rivers border the city to the west and south, the Jilong River separates the city center from the northern districts of Zhongshan and Neihu. In the north of the basin rise the mountains of the Yangmingshan National Park with the Qixing Shan as the highest point (1120 m). There you can experience geothermal activities (hot springs, fumaroles ) as well as marvel at the cherry blossom , butterflies and grasslands. In the south, the zoo, the Zhinan Temple and the tea houses of the Maokong Mountains attract visitors. Smaller mountains like the Xiang Shan reach into the city center. The Da'an Park is centrally located.

The area of ​​Taipei originally belonged to the tribal area of Taiwanese indigenous people from the Ketagalan tribe . Between 1626 and 1642, Spain set up isolated bases in northern Taiwan, but was driven out by the Dutch . In 1662 the Dutch were defeated by Zheng Chenggong (Koxinga), whose heirs lost control of Taiwan to the Qing Dynasty at the end of the 17th century . Only then did the colonization of northern Taiwan by Han immigrants begin.

Step by step the Han moved north. The area on the Danshui River became the most important center in northern Taiwan and the Han settlements of Báng-kah ( Taiwanese reading; 艋舺 , měngjiǎ , today Wanhua 萬 華 , Wànhuá ), Dalongdong , Dadaocheng developed into business centers. With their development, these three settlements represented the nucleus for the developing Taipei.

Taipei's development as a city began in 1709 when Chen-Lai-Zhang, an association of immigrants from Quanzhou , Fujian , received government permission to reclaim the area.

The first settlement was a trading village on the east bank of the Danshui with a port called Báng-kah, today Wanhua, where the Longshan Temple (Dragon Mountain Temple , 龍 山寺 , Lóngshān sì ) is also located.

At the beginning of the 1870s, expansion into a major city began. In 1879 the city gates were completed in the four directions. Except for the west gate, all the others are still preserved today. In 1885 the construction of the city walls began. At the same time, the streets were paved with cobblestones and some were already electrically lit. In the same year Taipei was promoted to city by the then provincial governor Liu Mingchuan . After the defeat of the Qing Empire in the First Sino-Japanese War in 1895, Taiwan became a Japanese colony . The city, pronounced Taihoku in Japanese , was redesigned three times by the Japanese during this time and finally became a major city. The design of the presidential palace is similar to the shape of the characters for Japan. Most of Taipei's road network today was created at that time.

During the Second World War , on May 31, 1945, the city experienced the heaviest of all American bombing raids on targets in Taiwan. The attack destroyed numerous buildings and claimed more than 3,000 lives, more than all other American air strikes on Taiwan during the war combined. During the period of absolute Kuomintang rule (1945 to the end of the 1980s), the event was largely hushed up, as Taiwan was interested in good relations with the USA.

After the defeat of the Japanese in 1945, Taiwan became a province of the Republic of China. Important political offices were held by mainland Chinese ( Waishengren ). Tension arose between them and the Taiwanese, who had just been Japanese citizens. These erupted in 1947 in the incident of February 28th , which started in Taipei, from there spread to the whole country and lasted until May. In 1949, the bourgeois government of China (formed by the Kuomintang ) withdrew to Taiwan to fight the Chinese communists during the final stages of the Chinese Civil War . This created an influx of capital (gold and currency reserves), art treasures and well-educated mainland Chinese, who belonged to the elite of the Republic of China, many of whom now settled in Taipei and the surrounding area. The city gradually became the political, economic and cultural center of Taiwan and is now one of the most important cities in Asia. 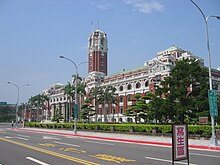 The Taipei City Council (台北市 議會) was established in 1946. Since 1976 it has been a city authority under the direct supervision of the government. The first meeting took place on December 25, 1969.

The members of the council are elected by direct vote. On December 25, 1998, 52 aldermen took over their offices for the Ninth Council. There are six electoral districts and one indigenous district. The Speaker and Vice-Speaker of the Council are elected by separate elections by the Assembly. Both must each receive more than 50% of the vote.

Street and place names are, in addition to the Han characters , marked with Hanyu Pinyin in Latin letters, and not with the formerly common Wade-Giles or Tongyong Pinyin . This also extends to the MRI. However, common different names such as Taipei are still in use. 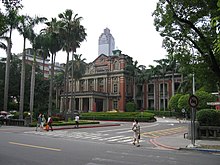 Taipei is a center of research and educational institutions. These include universities, colleges and Academia Sinica , the national academy of science of Taiwan.

In addition to a bus system, Taipei's public transport system includes the Taipei Metro , often called MRT (Mass Rapid Transit) for short, which also connects the various districts of New Taipei City . In the late 1980s, the main train station in the city center was completely relocated underground. The high-speed connection Taiwan High Speed ​​Rail (HSR) to Zuoying / Kaohsiung , which went into operation at the end of 2006, has left-hand traffic.

Taipei Songshan Domestic Airport is in the city itself ; Taipei-Taiwan Taoyuan International Airport , previously Taipei-Chiang Kai-shek Airport, is about an hour's drive southwest of Taipei near Taoyuan .

There is an extensive and very dense bus system through the city, especially in areas that are not served by the Taipei Metro.

Efforts have increased in recent years to expand the infrastructure for cyclists.

According to a study from 2014, Greater Taipei has a gross domestic product of 327 billion US dollars (KKB). In the ranking of the economically strongest metropolitan regions worldwide, he finished 29th. Taipei is the headquarters of most of the large Taiwanese companies and generates a third of the republic's economic output. The city's economy is dominated by trade, finance, industry, and information and communication technology. Taipei is a research and development center.

Many well-known companies in the field of electrical engineering and especially computer technology have their headquarters in Taipei and support the local economy and the economy of the entire country. Examples include Foxconn , Acer , Asus , BenQ , Gigabyte Technology , Biostar , AOC International , Aaeon , Delta Electronics and Wistron . With the Formosa Plastics Group and the Fair Friend Group , large companies in the chemical and mechanical engineering sectors are also represented.

Tourism plays an important role in Taipei's economy. With 7.4 million foreign visitors, Taipei was the 15th most visited city in the world in 2016. Tourists brought in $ 9.6 billion in revenue that same year. Most of the foreign visitors came from the People's Republic of China.

Taipei has partnerships with the following cities. The year of establishment in brackets.

Taipei panorama in the morning 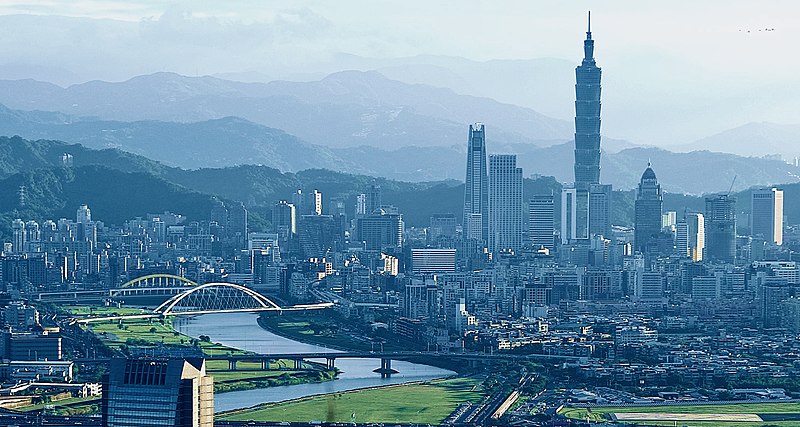 Administrative division of the Republic of China (Taiwan)