This article covers the modern empire. For the Japanese Empire before 1868 see Tennō and History of Japan .

The Japanese Empire is mostly only the state form of Japan that existed from the Meiji Restoration from 1868 to the end of the Second World War in 1945 . From a political point of view, it covers the period from the abolition of the Han and the establishment of the prefectures on July 14, 1871, through the expansion of Japan from the Pacific into the Indian Ocean, to the formal signing of the document of surrender on September 2, 1945 . According to the constitution, the term refers to the period from November 30, 1890 to May 2, 1947. The names Japanese Empire and Imperial Japan are well known and used, although the literal translation of the Japanese name is Empire Greater Japan .

The country was called the Japanese Empire since the fiefs of Satsuma and Chōshū , which were hostile to the Shogun , formed the basis of a new government in the Meiji Restoration with the aim of uniting the empire. However, it was not until the " Constitution of the Empire of Greater Japan " of 1889 that the title Tennō ("Emperor of Japan") was officially used for the first time. It was not until 1936 that the country's official name was legally established. Until then, the names Nippon ("Japan"), Nippon koku or Nihon koku ("Land of Japan"), Dai-Nippon ("Greater Japan"), Dai-Nippon koku or Dai-Nihon koku ("State of Greater Japan"), Nihon Teikoku ("Empire of Japan") used in an official capacity at the same time.

In 1946, one year after the end of the war, Japan was restructured and the country's title changed. With the draft of the constitution of Japan of 1946 the state was named as "State of Japan" ( Nihon Koku ).

Mercantilist theories prevailed for the military-industrial development plan and industrial growth as a whole . The prevailing opinion was that resourceful colonies were needed to keep up with the European powers. Formosa ( Taiwan 1895) and Korea (1910) had already been incorporated into the Japanese Empire as more agriculturally oriented colonies; the iron and coal of Manchuria , the rubber of Indochina, and the vast resources of China were therefore the primary targets of industry.

During the First World War , Japan, which had risen to the rank of great power through its victory in the war against Russia in 1904/05 at the latest , stood on the side of the Entente . By autumn 1914 it was able to occupy part of the German colony of German New Guinea and take the German base in Tsingtau in China, so that Japan's participation in the military conflict remained relatively limited.

Japan saw itself at the Paris Peace Conference of 1919 racially discriminated against and not on an equal footing with the Western powers. This contributed to the empire's gradual turning away from the west. In 1923 the Anglo-Japanese Alliance , which had existed since 1902, ended .

With the Great Depression, the Japanese Empire, like some other countries, turned to a policy that is debated under the term fascism . It was a unique political form, albeit with some parallels to existing ones in Europe. Japan was now primarily pursuing two economic goals. First of all, a tightly controlled arms industry seems to have revived the national economy in the midst of the Depression. Due to the lack of natural resources on the Japanese islands, in order to keep a strong industrial sector on a fast growth path , raw materials such as iron , oil and coal had to be imported in large parts. Most of these materials came from the United States . 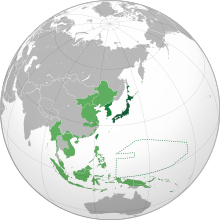 Manchuria was conquered in 1931 against only weak resistance. Externally, this war was justified by claiming that the Manchus would be liberated from Chinese rule. A puppet government ( Manchukuo ) was then set up, with the former Emperor of China Puyi as head of state . Jehol , a Chinese territory bordering Manchuria, was captured in 1933.

Japan began invading China in 1937, triggering the Second Sino-Japanese War , which also culminated in a conflict between Mao Zedong's communists and Chiang Kai-shek's nationalists. Japan brought most of the Chinese coasts and the port cities under control, but carefully avoided affecting the European sphere of influence. Before the invasion in 1936, Japan had signed an anti-communist treaty, the so-called Anti - Comintern Pact , with Germany, which Italy also joined in 1937. On September 27, 1940, Japan signed the three-power pact with the German Reich and the Kingdom of Italy. The most significant impact came from the Japanese attack on Pearl Harbor . Due to the surprise attack without a previous declaration of war , a large part of the American battle fleet was switched off, giving the Japanese fleet absolute superiority in the Pacific region for several months .