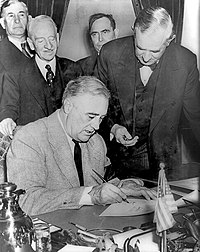 US President Franklin D. Roosevelt signs the declaration of war on the German Reich on December 11, 1941 .

According to classical international law, the declaration of war was a unilateral, informal declaration of intent to the opposing war party , which announced the entry into a state of war .

A declaration of war was served on a state by another before hostilities began if the person concerned felt his interests threatened or his existence threatened and no diplomatic solution for this state was possible. Due to its alliance obligations, one state could find itself compelled to declare war against another.

Since diplomatic means are to be regarded as exhausted with the declaration of war, the adversaries usually break off diplomatic relations more or less abruptly.

A declaration of war is a state action that was partly tied to certain forms. During the time of the Roman kings and in republican Rome , a special college of priests, the fetials , watched over the fact that improperly waged wars did not violate divine law. In order to comply with the prescribed form of declaration of war, the opponent had to be given an ultimatum , which was to be announced in a solemn manner by four priests at the state border , at the entrance gate and on the market square of the seat of the enemy ruler. The posting of the ultimatum set in motion a period of several weeks within which the disputed matter could be settled in a peaceful manner. If the ultimatum was not met, the fetials raised a solemn protest and returned home. The war was then finally decided. After the decision was made, the fetials returned to the enemy frontier to declare war under the prescribed sacred ceremonies . Under the exclamation of the slogan: "Bellum indico facioque" ("I declare war and wage war"), the fetials hurled a bloody lance, scorched at the tip or studded with iron, over the border into enemy land.

This solemn form of the Roman declaration of war lasted until the Roman Empire . Later, the general's envoys took over the actual declaration of war, but the symbolic act of hurling, the necessary requirement of a legally valid war, remained reserved for the priests. When the Romans carried the war to ever more distant countries, the fetials in their homeland threw their spear over a pillar, which symbolized the border of the land to be occupied. As the influence of the priesthood diminished, this ceremony lost its importance and eventually became completely out of practice. The official declaration of war was always necessary under Roman law: “Enemies of the state are those who have declared war on us or on whom we have declared war on behalf of the state; the rest are highwaymen or robbers . "

In the Middle Ages the declaration of war was part of knightly warfare, but it was no longer tied to certain forms. A prince who started a war informed his opponent of the reasons which led him to take this step. Ideally, the notification was made by a herald who enjoyed diplomatic immunity as the bearer of declarations of war or other opposing communications .

In the Austro-Prussian War of 1866, neither Prussia nor Austria made official declarations of war. Instead, Prussian and Austrian parliamentarians exchanged notifications on June 19 and 21, respectively , from which it emerged that both states were now in a state of war.

The Franco-Prussian War of 1870 was ended by the declaration of war by Emperor Napoleon III. initiated on July 19, 1870. At this point in time, large parts of the German troops had already mobilized (in Bavaria the mobilization of the troops had already started on July 15th, in Prussia one day later on the 16th of the month). The actual fighting began with a French advance into German territory on August 2, 1870, two weeks after the declaration of war. Nevertheless, the deployment of German troops caught the French army partly unprepared. One of the reasons why the war ended in disaster for France was probably the premature declaration of war, to which Napoleon had been tempted by Bismarck's provocative behavior .

The First World War began with Austria-Hungary declaring war on Serbia on July 28, 1914. This declaration was preceded by an ultimatum on July 23, in which the Austrian government carried out a judicial investigation into the murder of the heir to the throne Archduke Franz Ferdinand of the Serbs with the participation of Austrian official bodies. The declaration of war on Serbia after the ultimatum had expired brought a complicated system of alliances into effect: On July 31, 1914, Austria-Hungary and Russia began general mobilization. Germany declared war on Russia on August 1, 1914 and France on August 3, 1914, and invaded neutral Belgium with her troops . The following day Great Britain declared war on Germany. The Austro-Hungarian declaration of war against Russia took place on August 6, 1914; Montenegro had declared war on Austria-Hungary the day before. France declared war on August 11, and Great Britain declared war on Austria-Hungary the next day; other states followed suit. Italy relied on the statutes of the Triple Alliance , according to which it belonged to only one defensive alliance, and remained neutral for the time being.

Since the Briand-Kellogg Pact of 1928, which 51 states had already signed by the end of 1929, war has been outlawed under international law, so that formal declarations of war are becoming less and less common. In modern international law, each party to a war tries rather to push the start of the conflict on to the other party, to present the start of hostilities as a prevention of impending aggression or to use overarching aspects such as peacekeeping , protection against weapons of mass destruction or human rights as justification.

During the Second World War , war was often only declared when acts of war did not immediately follow. This was the case, for example, in September 1939 when, after the German invasion of Poland, its allies France and Great Britain declared war on the German Reich (so-called seat war or "Drôle de Guerre"). The German Reich also declared war on the USA in 1941, although the latter had already provided logistical and educational support in favor of the war opponent Great Britain for a long time without any open acts of war having followed. At the end of the Second World War, almost all Latin American countries declared war on Germany without any direct acts of war ensuing.

Formal declarations of war have not been made since the Second World War.

Wars without declarations of war

In 1967 Israel attacked the Egyptian airfields with a pre-emptive strike, which triggered the Six Day War .

The USA intervened on South Korea's side in the Korean War in 1950 and called it an "international police operation" carried out on behalf of the United Nations . There was also no declaration of war for the American interventions in Vietnam , Laos and Cambodia ( Vietnam War ), nor for the Gulf War of 1990/91 to liberate Kuwait . For the second Iraq war , the Allies chose the term “disarmament”. The war in Afghanistan since 2001 is usually referred to as the "international military presence" and has been mandated by the UN Security Council through resolutions every year since 2001 . The reason for these artistic terms is that there is no explicit “international mandate” for waging war. Instead, the legal fiction is created that it is not about an intervention by foreign powers, but about the military support of a legal state authority in these countries.

Article 1.
The Contracting Powers recognize that hostilities among them must not begin without prior unambiguous notice, either in the form of a reasoned declaration of war or an ultimatum with a conditional declaration of war.
Article 2.
The state of war is to be reported to the neutral powers immediately and only becomes effective for them after receipt of a report, which can also be sent by telegram. However, the neutral powers cannot plead the failure to report if it is beyond doubt that they actually knew the state of war.
Article 3.
Article 1 of this Agreement shall take effect in the event of war between two or more Contracting Powers. Article 2 is binding in the relations of a belligerent contracting power and the neutral powers, which are also contracting powers. "

In Austria, according to Art. 38 B-VG, the Federal Assembly is responsible for declarations of war. These are to be officially announced by the Federal Chancellor in accordance with Art. 40 Para. 2 B-VG . There are no further regulations in this regard, and no war has been declared by Austria since the Federal Constitutional Law came into existence .

Only the French President , who is also the Commander-in-Chief of the troops, has the right of initiative to declare war . According to Article 35 of the French Constitution , however, Parliament must approve the declaration of war for it to take effect.

Wikisource: Declaration of the state of war of the German Empire  - sources and full texts

Wording of the USA's declaration of war on Germany (1941)