This article is about the weapon spear, for further meanings see spear (disambiguation) . 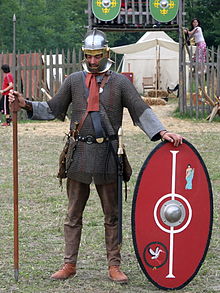 Actor around 2005 with the equipment of a Roman soldier from around 175 AD with a spear (pilum), sword and shield.

The spear (also throwing spear ) is a throwing and stabbing weapon that belongs to the polearms and is particularly suitable for throwing due to its construction. There are different versions made of stone, bone, wood or metal. They are still in use today as sports equipment. They are among the oldest combat and hunting weapons used by humans. The oldest stone spearhead finds are half a million years old.

A point (often double-edged blade) made of different materials (sharpened stones, bronze, hardwood, bone, iron, steel) is attached to a rod, the shaft. Spears were commonly intended as throwing weapons or as multi-purpose weapons used in both long-range and close-range combat. They are usually shorter and lighter than skewers that are not thrown against it.

Some javelins, such as the Roman pilum , had particularly long tips that bent when they hit them. It was therefore difficult to pull them out of the shields and made them unusable. In addition, the danger of throwing the spear back was avoided.

At the present time, spears are still used as hunting weapons in some regions, for example as fishing spears , otherwise spears play a role in the maintenance of tradition and as sports equipment , for example in the Olympic discipline of javelin throwing .

An improvement in the range, penetration and accuracy of the spear is achieved by the spear thrower .

To be thrown accurately, the spear must be balanced so that it always hits the target with the point first. After a target has been sighted taking into account the trajectory, the spear is thrown. When throwing into the water, for example for fishing, the refraction of light must be taken into account. Modern sports spears can throw distances of 100 m, but the effective range of hunting and war spears was less than 20 meters. The world record set by the Czech Jan Železný since May 1996 is 98.48 m.

Another possibility to improve the target accuracy is the twist stabilization . This can be caused by a so-called short roll belt that is wrapped around the shaft. When throwing the thrower holds the sling in his hand, the sling unwinds and sets the spear in rotation.

Spears (Fig. From the Nordisk familjebok )

The development of the biomechanical prerequisites for a throwing technique suitable for a spear is dated to the time of Homo erectus about two million years ago.

The oldest spear element found worldwide to date is a wooden spearhead from Essex, England . It was excavated at Clacton in 1911 and estimated to be 360,000 to 420,000 years old. The Schöningen spears represent a more extensive find with individual pieces over two meters in length . These were initially dated to an age of 400,000 years, but according to the latest considerations they are probably around 270,000 years old and ascribed to Homo heidelbergensis .

In South Africa discovered stone tools were interpreted in 2012 as spearheads; if this interpretation is correct, it would be the oldest evidence of the use of spears at 500,000 years ago.

The weapon was used continuously as a weapon of war until the appearance of firearms . This weapon was particularly popular in ancient times , e.g. B. from Greeks through Peltast , from Romans as Pilum or from Teutons as Ango , Frame , Ger .

In the 19th century, the Zulu in South Africa still used spears, the so-called Assegai . Napoléon Eugène Louis Bonaparte was killed by such a weapon in the Zulu War in South Africa on June 1, 1879.

Spear as a symbol

The spear also had symbolic value in part. One example is the Holy Lance of the Roman-German kings and emperors. In ancient Icelandic literature, the spear Gungnir appears as an attribute of the god Odin .

On the basis of vase depictions and grave finds, as well as descriptions by the poet Homer , it can be assumed that the spear served as a status or even rule symbol in ancient Greece , at least since the late Mycenaean period.