from Wikipedia, the free encyclopedia
This is the spotted version , flagged on August 1st, 2020 . There are 2 pending changes that have yet to be viewed.

Eric Lemming , three-time Olympic champion, is considered to be the inventor of modern javelin throwing technology.

Javelin throwing is a discipline of athletics in which a javelin has to be thrown as far as possible after a run-up. Six attempts are available for this in the competition.

The best javelin throwers reach over 90 meters (world record: 98.48 m) for men and approx. 70 meters (world record: 72.28 m) for women. In the 1980s, different spears were common than in the present, with which much greater distances could be achieved (world records: 104.80 m for men, 80.00 m for women). For safety reasons, however, in 1986 (for men) and 1999 (for women) the standards for the nature of the spears were changed (shifting the center of gravity) so that they flew less far.

Waiting for a clear path before starting 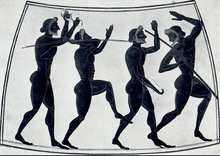 A scene with javelin throwers and other pentathletes. Originally found on a Panathenaic amphora from ancient Greece, around 525 BC. British Museum.

The spear is the oldest hunting weapon known to man. When for the first time a worked stone tip was attached to a stick used for hunting, is lost in the darkness of prehistory, as is the first occasion when this tool was also used for a sporting test of strength. The oldest fully preserved finds are the Schöninger spears from the Paleolithic , whose age is estimated at 270,000 to 400,000 years.

According to Greek mythology , Heracles was already an excellent spear thrower. The enchanted, dwarf-forged spear of the Norse god Odin is called Gungnir . The Olympic Games of Antiquity v 708th It is said to have been part of the Olympic program for the first time as a pentathlon discipline . However, in the sub- disciplines long and target throw , the javelin was thrown with the help of a sling , the so-called ankyle . It was a string that was wound several times around the spear and at the end tied into a noose into which the thrower inserted two fingers. During the throw it unwound and gave the spear a twist and thus a smoother flight. In fact, modern experiments have shown that inexperienced javelin throwers can achieve greater distances with this technique than without a throwing loop.

In the 18th century it was again very popular in Scandinavia . For the Finns in particular , the spear, and thus the throwing of the javelin, became a national symbol of independence.

In its almost unchanged form (the long throw), the javelin was returned to the Olympic program in 1906 in Athens (men) and 1932 in Los Angeles (women).

Javelin throwing only became known in Germany after the inventor of modern javelin throwing technology, Eric Lemming , demonstrated it in May 1906 at the SC Komet Swedish meeting. The first German record was set by Ernst Mallwitz from Berlin with 37.70 m (world best at that time: Eric Lemming from Sweden, 53.90 m).

While Scandinavian throwers dominated the men's competitions for a long time, the picture was less homogeneous for women. Since the 1970s and 1980s, athletes from the Eastern Bloc have increasingly pushed themselves to the top of the world. As in all Olympic sports, athletes from the GDR were disproportionately represented.

At a top-class international sports festival in Berlin in 1984 , Uwe Hohn from Potsdam exceeded the 100-meter mark with 104.80 m for the first time so clearly that the IAAF changed the regulations and shifted the focus of the javelin. The associated shortening of the widths had become necessary for safety reasons - the stadiums were too small. Hohn's spear got stuck not far from the parallel jumping competitions and the running track.

In 1988 Petra Felke from Jena also set an all-time world record with exactly 80.00 m. In 1999 the IAAF also prescribed a modified spear for women.

But as tangible as it seemed - it was not until the 1970s that the world's best throwers, with standard ranges well over 90 meters, slowly approached. In 1973 the German Klaus Wolfermann threw 94.08 m. Athletes like the Finn Seppo Räty , Steve Backley ( GBR ), Jan Železný (then still TCH ) competed in the 80s with the Germans Klaus Tafelmeier ( FRG ), Uwe Hohn and Detlef Michel ( GDR ) for the best distances. The latter was world champion in 1983 with "only" 89.48 m.

If the strict doping controls enforced by all international associations since the 1990s are maintained and there are no drastic changes in materials and in the regulations, the historical records of Felke and Hohn are likely to last for many years to come.

After Uwe Hohn's record throw , the spear was modified to limit the rapidly growing distances that occurred due to new materials and improved flight characteristics. The changes were controversial, as they make it difficult to compare the record development and after a few years each would achieve distances of the same order of magnitude.

In 1992 the Briton Steve Backley threw the "new" javelin again over 91 meters. The exceptional Czech athlete Jan Železný , who was already among the best in the world in Hohn's time, improved the world record in series since 1993 up to the still current record of 98.48 m in 1996. Four female athletes have more than 70 Meters thrown, the first was the Cuban Osleidys Menéndez 2001 with 71.54 m, then Christina Obergföll, the current world record holder Barbora Špotáková with 72.28 m and the Russian Marija Abakumowa.

The javelin is one of the most technically demanding disciplines. In contrast to other throwing disciplines, a short run-up is permitted, from which the phases of swinging and throwing are synchronized with each other.

The spear is a slim stick made of wood, metal, carbon or a combination of these, tapering at both ends. The length is in the men up in the ladies up . The mass of the spears is , respectively . All spears have a metal tip that is long or long. In the middle, at the grip point, there is a textile wrapping, including the diameter of which is no more than that of the men and women. The spears used in the youth and senior sector are lighter and, accordingly, shorter.

The throwing area is a sector of a circle with an opening angle of 29 ° and a length of . It is limited at the drop point by a long, arched drop bar, which the thrower must not touch or cross. For a valid throw, the inrun may only be left when the spear has touched the ground in the sector.

According to the regulations, the javelin must be held in the middle and the tip must point in the direction of the throw when it is thrown. In the 1950s, the Spaniard Félix Erausquin showed that this cannot be taken for granted with a turning technique that enabled distances of up to . It must hit head first and within the sector, but it need not get stuck. The measurement is made from the point of the first impression to the inside edge of the beam.

All throwers initially complete three throws in the competition. The eight best have three more attempts and determine the top positions among themselves.

There are several types of grip. What these slightly different types of grip have in common is that two fingers enclose the grip at the rear end and ensure contact during the throw. The most common type of grip is the thumb-forefinger grip . Here the thumb and forefinger lie behind the textile winding of the spear. All other fingers are on the binding. At the time of the throw, the use of this type of grip can make it easier for the spear to move sideways. Other types of grip are the thumb-middle finger grip and the pincer grip . In contrast to the thumb-index finger grip, the wrapping of the spear is grasped from behind with the thumb and middle finger. The index finger stabilizes the spear by resting it slightly stretched below the coil. With pincer grips, the index and middle fingers form the point of contact with the handle. Here the thumb is used to stabilize the handle on the side.

The use of resin or magnesia is allowed to improve the contact between the fingers and the winding .

Approach and return of the spear

The run-up is an escalation run. In order to prepare the throwing display, the javelin position is changed during the approach; at first the spear is carried loosely above the head. Then the spear is led up and back before the last five steps in order to achieve the greatest possible twisting of the body.

This process ( usually over two to four steps) is called spear withdrawal . There are two common procedures here: the Finnish (arching from top-front over bottom to top-back) and the Swedish withdrawal (straight-line return next to the head).

The last three steps (impulse step and caulking step - left / right / left for the right thrower) are very important and form the basis for good bow tension and a powerful throw.

Physics of the javelin throw

The trajectory that the spear travels during a throw is subject to the laws of physics . There are two effects to consider:

*: World record recognized by the women's sports organization FSFI , prior to the registration of women's world records by the International Athletics Federation IAAF

**: World best at the beginning of the introduction of the new spear design in 1999, not an official world record

All javelin throwers with a distance of or more (the list only includes throws with the "new" competition javelin, which has been mandatory since 1986). A = width achieved under altitude conditions.

All throwers with a performance of or more (the list only contains throws with the competition javelin, which has been prescribed since 1999).