The title of this article is ambiguous. Further meanings are listed under Mikkeli (disambiguation) .

Mikkeli [ ˈmikːɛli ] ( Swedish S: t Michel ) is a town with 53,818 inhabitants (as of December 31, 2018) in the Finnish region of Savo . It is the administrative center of the landscape Savo and Evangelical-Lutheran bishop's seat .

Mikkeli is located around 230 kilometers northeast of the capital Helsinki in the Savo region . The city center lies on Savilahti Bay, an extension of the extensive Saimaa lake system. One of the watersheds of the Finnish Lake District runs through the urban area . While the rivers and lakes in the eastern half of the city drain into Lake Ladoga via Lake Saimaa and the Vuoksi River, the western part of the district belongs to the catchment area of ​​the Kymijoki .

By incorporating several neighboring communities, the urban area of ​​Mikkeli covers an extensive area of ​​3,229.6 square kilometers. This means that Mikkeli is about half the size of Luxembourg in terms of area . A large part of the urban area is structured in a rural way. The population density is correspondingly low with 21 inhabitants per square kilometer. In addition to the core city, Mikkeli has six other settlement centers ( taajama ): (Population as of December 31, 2011):

The oldest traces of settlement in the area around Mikkeli date back to the Stone Age, but a permanent settlement did not form until the High Middle Ages. In the 13th century, today's Mikkeli was on the border between the two expanding empires of Sweden and Novgorod . Around 1270 today's Mikkeli became the administrative seat of a Novgorod parish ( pogost ); however, no archaeological traces have been preserved from the first church built at this time. The influence of Novgorod and thus of Orthodox Christianity was put to an end with the Treaty of Nöteborg in 1323 , with which the area came permanently under Swedish control. From the formerly Orthodox parish, the large Catholic community Savilahti (Swedish Savolox ) was formed, which encompassed almost the entire landscape of Savo and gave it its name. Today's Mikkeli was also known under the name Savilahti until the 16th century , today this toponym only refers to the bay of Lake Saimaa, which lines the city center. In the first decades of Swedish rule, the place received a new wooden church, from which the brick sacristy has been preserved. This is the oldest preserved building in the city and the entire Savo region and is one of the landmarks of Mikkeli today. The current city name is derived from the patron saint of this church, the Archangel Michael . The name Mikkeli was first documented in 1604.

In the 18th century, Mikkeli benefited from the fact that Sweden had to cede Lappeenranta to Russia after the lost war of hats . In 1744 Mikkeli received market rights that Lappeenranta had previously granted. After all of Finland had come under Russian rule in the 19th century, Tsar Nicholas I founded the town of Mikkeli in 1838 on the site of the old church village . Five years later, the capital of the Mikkeli province was moved from Heinola to Mikkeli.

During World War II , the Winter War from 1939 to 1940 and the Continuation War from 1941 to 1944, Mikkeli was the location of the headquarters of the Finnish Marshal Carl Gustaf Emil Mannerheim . During the Winter War, the city was targeted six times by Soviet bombing attacks and was hit relatively hard. After the end of the war, Mikkeli became the seat of the Diocese of Mikkeli when the bishopric of the former Diocese of Viipuri was moved from Viipuri (Vyborg), which had been ceded to the Soviet Union, to Mikkeli.

In the course of the 1997 provincial reform, the Mikkeli province was dissolved. Mikkeli was designated the capital of the new province of Eastern Finland and remained so until the provinces were abolished in 2009. Since the turn of the millennium, the administrative urban area of ​​Mikkeli, which originally only comprised the city proper, has expanded considerably through the incorporation of several neighboring municipalities: 2001 were enlarged The rural community of Mikkeli and Anttola was incorporated, Haukivuori followed in 2007, and Ristiina and Suomenniemi were incorporated in 2013 .

In Mikkeli, the country's three major parties are roughly level. The strongest political force is the conservative-liberal Center Party , which has 16 of 59 members of the city council, followed by the Social Democrats with 15 and the rally party with 14 seats. The right-wing populist base Finns are still represented in the city council with seven, the Green Bund with four, and the Christian Democrats with three members.

The Mikkeli coat of arms was drawn by Eero Jokilehto based on a design by Gunnar Clément and has been in use since January 15, 1943. The blazon reads: “Divided; in the upper field in gold twice the marshal's baton of the Marshal of Finland, Freiherr CGE Mannerheim, in the lower field in black the upwardly directed golden bow of the Savo countryside with a silver string, arrowhead and fletching. A Swedish count's crown rests on the shield ; under the sign the freedom cross with ribbon. “The marshal's baton reminds of the headquarters of Marshal Mannerheim, which was in Mikkeli during the Second World War. The arch is the heraldic symbol of the Savo landscape. It was already part of the two older coats of arms of the city, introduced in 1842 and 1922. The city was allowed to add the Freedom Cross to its coat of arms in December 1944.

Mikkeli has the following city ​​partnerships :

Anttola, which was incorporated into the town of Mikkeli in 2001, also maintains a partnership with the Estonian community of Mõisaküla .

Most of the companies based in Mikkeli are small and medium-sized companies in the wood processing, textile and metal processing industries. With the Visulahti holiday center and a total of over 25,000 holiday homes in the city, tourism also plays a major role.

At the main train station in Mikkeli

Mikkeli is conveniently located at the intersection of several state roads . State road 5 , one of the most important north-south connections in Finland, crosses in the center of Mikkeli with state road 13 from Nuijamaa to Kokkola . The final section of State Road 15 coming from Kotka follows the same route as State Road 13 and ends in Mikkeli.

Mikkeli is connected to the Savo Railway from Kouvola to Iisalmi . The only two train stations in the city where passenger trains stop are the main train station in the center of Mikkeli, a neo-Renaissance building completed in 1888 , and the Haukivuori train station. The Mikkeli Airport is located just west of downtown. There are currently no regular flight connections to Mikkeli, the last time the Swedish airline European Executive Express had flown to the airport from Helsinki until October 2005 . 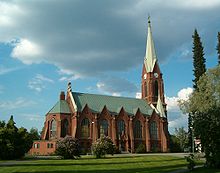 The cathedral of Mikkeli was 1896-97, designed by Josef Stenbäck built, the church's most prominent architects in Finland. The single-nave church, built of red brick, is one of the most stylish examples of neo-Gothic architecture in Finland. The 64 m high bell tower on the west side faces the city and dominates the skyline as the city's tallest building to this day. The church originally only served as a church for the Evangelical Lutheran parish of the town of Mikkeli, which only became independent from the parish of the rural parish of Mikkeli when it was consecrated in 1897 . When Finland ceded the city of Viipuri (now Vyborg) to the Soviet Union in 1944 after its defeat in World War II, the Viipuri diocese was dissolved and the bishopric moved to Mikkeli. Since 1945 the church has been the cathedral of the Mikkeli diocese , which covers large parts of south-east Finland.

To the east of the city is the church of the Mikkeli rural community. The wooden double-cross church was built in 1816 and is the third largest wooden church in Finland with 2000 seats . Anttola Church, also made of wood, was originally built in Juva in 1729 . In 1870 it was dismantled and moved to its current location. Haukivuori Church was built in 1951 after its predecessor had burned down two years earlier. All that remains of the old church from the late 18th century is the free-standing bell tower. The Mikkeli Orthodox Church is a modern building from 1957. The medieval stone sacristy of Mikkeli now serves as a church museum. The provincial administration building, built in 1843 according to plans by Carl Ludwig Engel , and the town hall from 1912 are also of architectural value .

Mikkeli's cultural offerings are quite rich for a city of its size. The modern Mikaeli cultural center serves as a concert and congress building. Mikkeli has a city orchestra and a theater.

There are also three museums in the city:

Cities and municipalities in South Savo