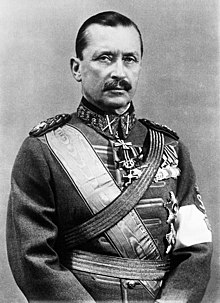 Until the end of the First World War

Mannerheim Monument in the center of Helsinki in Mannerheimintie

Mannerheim came from an influential family of the Swedish-speaking minority in Finland, which was then part of the Russian Empire . He was born on the family's estate , Castle Villnäs ( Finnish : Louhisaari ) in Askainen. After graduating from high school in Helsinki , he was accepted into the Nikolayev Cavalry School in Saint Petersburg and graduated with honors in 1889. In the same year he took up his first officer post as a cornet in the 15th Aleksandrijski Dragoon Regiment in Kalisch . About it he wrote: “The regiment whose horses were black were still called ' Death Hussars ,' a reminder that it had once been a Hussar regiment. The uniform jacket ( Dolman ) was black and trimmed with silver cords. ” After a year in Kalisch he was transferred to the Chevalier Guard in Saint Petersburg, where he was able to establish important contacts with the Tsar's court . During the coronation procession of Tsar Nicholas II on May 26, 1896 in Moscow, Mannerheim was one of the Tsar's bodyguards. After a short time in the court stables, Mannerheim returned to active service in 1903, fought in the Russo-Japanese War of 1905 and was promoted to colonel in the same year . In 1906 he was commissioned by the Russian General Staff to explore the unexplored areas on the Russian-Chinese border, whereupon he went on a 6,000-kilometer journey on horseback until 1908. He also gained important knowledge in anthropology (especially about Finno-Ugric peoples and languages ) and learned the Chinese language . In 1909 he was appointed commander of the 13th Vladimir Uhlan Regiment in Nowominsk (today: Mińsk Mazowiecki ) and spent two years in this city before the outbreak of the First World War . Here he was also promoted to major general in 1911 and transferred to Warsaw , where he took over the Life Guard Uhlan Regiment, which, as he writes, “was one of the best cavalry regiments in the army” .

On May 2, 1892 Mannerheim married the Russian Anastasia Nikolajewna Arapowa († 1936), with whom he had two daughters: Anastasia (born April 11, 1893), the Carmelite nun in London , and Sophie (born July 24, 1895). The marriage was divorced in 1919, but ended unofficially in 1902. Mannerheim was later still in a relationship with several women, but no longer married.

During the World War he was in command of various associations. In early 1917 he commanded a cavalry corps as lieutenant general .

In September 1917 he was transferred to the reserve , took leave of the Russian army after the October Revolution and returned to his native Finland . He intended to start a civilian career. As a refugee, however, he was neither given a Finnish passport nor a ration card . As the only high general of Finnish origin, however, on January 15, 1918, he received supreme command of the country's army, which was still in the making. The aristocratic, elegant cavalry general with his Swedish and Russian sympathies, who spoke only poorly Finnish and was alien to the conditions of the country, became the national hero of white Finland. His first measure was the disarming of the Russian garrisons of 5,000 men in the province of Ostrobothnia . At the same time, Finnish Social Democrats seized power in southern Finland. In the ensuing civil war , the bourgeois “ whites ” under Mannerheim's command defeated the rebellious “reds” in the spring of 1918 in the battle of Tammerfors / Tampere . Around 5,200 soldiers and a total of around 30,000 Finns were killed on both sides in the civil war.

After the collapse of “red Finland”, 70,000 Bolshevik sympathizers, including children, were sent to concentration camps, and 12,000 died in the following six months. Although Mannerheim could not personally be accused of atrocities, it is inconceivable that he was not informed about the conditions in the largest concentration camp, the Suomenlinna Fortress : Here 3,000 “Reds” were shot , hanged , bayoneted or beaten to death . Although he did not order the killings, he did little about it. At the time he was nicknamed "the bloody baron". Mannerheim was a monarchist and was convinced that it would be enough to shoot the red leaders and immediately bring the workers back to the factories.

Mannerheim withdrew because he did not share the pro-German attitude of the Finnish Senate , which was trying to protect the country against Soviet Russia . After the defeat of the Central Powers , Mannerheim was appointed imperial administrator (Finnish: valtionhoitaja ; Swedish: riksföreståndare ) in 1919 and campaigned for the international recognition of independent Finland. In the presidential elections in July 1919, which took place under the new republican constitution , he was defeated by the liberal Kaarlo Juho Ståhlberg and withdrew into private life. After taking over the presidency by Pehr Svinhufvud Evind Mannerheim became the 1933 Field Marshal appointed. 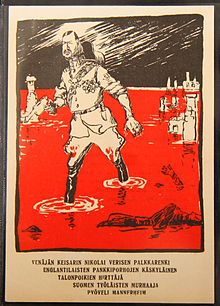 During the Second World War , Mannerheim led the Finnish army as commander in chief in the winter war of 1939/1940, although he advocated certain concessions to the USSR . After the attack of the German Wehrmacht on the Soviet Union in 1941, he led the Continuation War again the Finnish troops, but always tried not to provoke the Soviet Union too much - including refusing to Finnish troops to the siege of Leningrad to send and Murmansk to To attack the northern sea port of Murmansk .

In 1941 the order of bravery of the Mannerheim Cross was donated to him in honor . In 1942 he was promoted to Marshal of Finland on the occasion of his 75th birthday .

Visit of Hitler in Finland 1942

Adolf Hitler used Mannerheim's 75th birthday to visit Finland on June 4, 1942. Hitler only informed Mannerheim of his plans the day before, but planned this trip in detail weeks in advance. During the rough landing, a tire on the plane caught fire, which Hitler ignored in order to concentrate on his appearance in front of the camera - the arrival was filmed for the German newsreel . The scenes with the fire were later retouched and partly re-shot.

Mannerheim looked skeptical and serious about Hitler and let him lead mainly his well-known monologues, whereas he joked and laughed in conversation with his own followers. Hitler's only private conversation was recorded during Hitler's stay in Finland, which, in order to avoid the appearance of a state visit, took place in largely secrecy near a railway station at the Immola airfield . Thor Damen, a Finnish sound engineer, secretly recorded a good 25 minutes of a conversation with Mannerheim.

According to some reports, Hitler wanted to call on the Finns to take stronger military action against the Soviet Union, but made no comments in this regard. According to an anecdote, Mannerheim had deliberately lit a cigar during the conversation in order to explore his negotiating position based on the reaction of Hitler, who is known for his aversion to smokers. Contrary to the expectations of the companions, there was no reaction, so Mannerheim said he was aware of the Germans' weak position.

When the SS guards noticed that the tape was running and the conversation was being recorded, they became very angry and stopped the recording. SS soldiers gestured to slit the sound technician's throat and are said to have said that in Germany he had been killed for espionage. However, the tape was neither destroyed nor confiscated by the SS; it was only sealed with a promise never to open it again.

On August 4, 1944, the 77-year-old Mannerheim was elected President of the Republic of Finland . Before that, he had urged his predecessor Risto Ryti to sign the Ryti-Ribbentrop contract . Through the military alliance with Germany , combined with arms deliveries and the renunciation of a separate peace, the Soviet Union should be moved to more favorable peace conditions for Finland. Wilhelm Keitel traveled to Helsinki to keep Mannerheim in the alliance of the Axis Powers and presented him with the Knight's Cross of the Iron Cross with Oak Leaves, which Hitler had given him . Mannerheim replied that the German nation could fight to the last without fear of extinction, but the small Finnish people could not. He broke off all relations with the German Reich and on August 24, 1944, concluded an armistice with the Soviet Union . The favorable peace conditions were made possible by the successful battle of Tali-Ihantala , Finland's greatest military success in the war. In the Lapland War , the Wehrmacht troops were driven out of Finland, the fighting and the scorched earth tactics used by the Wehrmacht caused considerable damage. Among other things, Rovaniemi was almost completely burned down.

After retiring from politics in 1946

Mannerheim remained head of state until 1946, when he resigned for health reasons and was replaced by Juho Kusti Paasikivi . With Paasikivi's assumption of the presidency, a new era began in Finnish politics.

Mannerheim spent the last years of his life mainly in the Swiss sanatorium Valmont ( Glion ), where he wrote his memoir , Minnen . He died on January 27, 1951 in Lausanne after gastric surgery.

He was buried with military honors in the Hietaniemi cemetery in Helsinki in the middle of a military cemetery.

From a little-known officer, Mannerheim became a Finnish national hero . Mannerheim, who never learned to speak fluent Finnish , attained the mythical status of "savior of the fatherland" during his lifetime. He became an admired idol, a symbol of the victory over Bolshevism , but for his opponents he was the "bloody baron", the "white devil", "executioner" or "butcher". In 1960, a monument was erected in the center of Helsinki , an equestrian statue on Mannerheimintie , a main street also named in honor of Mannerheim.

On June 16, 2016, a memorial plaque was erected in St. Petersburg for the hero of the tsarist army, who commanded units during the First World War and was wounded twice. The inauguration took place amid loud protests from the Antimaidan movement . There was also a lawsuit against the display of the plaque.

President of the Republic of Finland