An imperial administrator represents the monarch during a vacant throne , i.e. if the king is absent for a longer period of time or in the period between his death and the accession of his successor to the throne. The term Verweser comes from the Old High German firwesan and means “to represent someone's place / essence”.

In the Holy Roman Empire , the imperial administration was institutionalized in the office of imperial vicar.

In the Roman-German Empire there were imperial vicars for the German and Italian areas as well as for the Arelat . For Germany, in 1356, the Golden Bull finalized an earlier regulation on imperial administration: According to this, the Count Palatine of the Rhine was imperial vicar ( vicarius imperii or provisor imperii ) for the areas under Franconian law, while the Elector of Saxony was for the areas under Saxon law . Her competencies included, among other things, the continuation of the current business of the king, court jurisdiction and the award of imperial fiefs with the exception of flag and scepter fiefs . They were not allowed to dispose of the imperial property .

The imperial vicariate over Italy , the occupation of which the popes temporarily claimed as their right, was disputed between the dukes of Savoy and Mantua . During the frequent absence of Emperor Frederick II in the empire, he appointed so-called Reichsgubernators as deputy and guardian for his sons Heinrich (VII.) And Conrad IV . 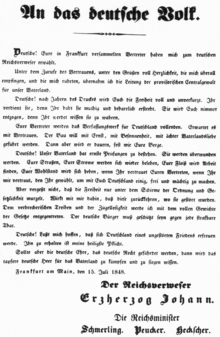 Proclamation of July 15, 1848 after taking over the provisional central authority

After the March Revolution of 1848, the Frankfurt National Assembly also created the office of Reich Administrator for a short time . On June 28, 1848, the National Assembly, the first freely elected German parliament, created a provisional central authority out of its own authority , which was to take over the management of the executive branch for all of Germany until a Reich constitution was passed and a final head of state was appointed. The head of this provisional central authority was an imperial administrator - on the following day Archduke Johann of Austria was elected to this office, which he was to hold until the National Assembly had appointed an emperor as the final head of state.

The power of Johann's government was limited, as the larger individual states in particular only worked with it if this suited their interests. The actual executive power remained with the individual states. After the violent suppression of the revolution, the central power remained in office. Only on December 20, 1849 did Johann transfer his powers to an Austrian-Prussian federal central commission .

The Reichsverweser after the First World War

In the last weeks of the First World War , calls for the abdication of the Prussian King and German Emperor Wilhelm II increased. During this time, the official Walter Simons from the Reich Chancellery thought that Wilhelm and the unpopular Crown Prince should abdicate for to set up a regency council for the next minor heir to the throne, Wilhelm of Prussia . At the level of the Reich, a constitution-amending law would have been needed to set up a Reichsverweserschaft. Wilhelm II, however, rejected such plans on November 1, 1918, at a time when a voluntary abdication might have saved the monarchy . On November 3rd the sailors uprising broke out in Kiel . 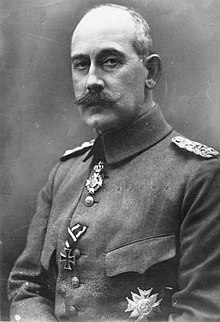 In a conversation with leading Social Democrats around Friedrich Ebert , Max transferred the office of Reich Chancellor to Ebert. His advisors had insisted that Max should exercise the powers of the emperor as imperial administrator to keep the question of the head of state open until a decision by a national assembly. At the time, however, Max no longer considered this realistic.

Shortly afterwards, the social democrat Philipp Scheidemann publicly applauded the republic . The exact text is no longer known today, but the speech has been interpreted as the proclamation of the republic . The surprised and angry Ebert now asked Max to become imperial administrator, which, however, he refused.

The function of emperor and chancellor (and in some cases other state organs) was exercised by the council of people's representatives from November 12th . Friedrich Ebert was one of the chairmen. With the law on provisional imperial power of February 10, 1919, Germany received a provisional constitutional order and soon afterwards a Reich President and a Reich government.

The Reichsverweser after the coup plans of July 20, 1944

In the coup plan of July 20, 1944 during the Nazi era, it was envisaged that General Ludwig Beck should become provisional head of state as Reich administrator. He would have tried to reach an armistice with the Western Allies of World War II . The assassination attempt of July 20, 1944 on the Führer Adolf Hitler , which was supposed to initiate the coup, failed, however. Beck and many other members of the resistance were executed.

The “Principles for Reorganization” of August 9, 1943 are a document that summarizes the constitutional ideas of the Kreisau district . The office of the Reich Administrator is largely comparable to that of the Weimar Reich President : he appoints and dismisses the members of the government. However, these can be overthrown by the Reichstag under certain conditions. Contrary to the Weimar Constitution, the Reichsverweser is not elected by the people, but by the Reichstag. The Reichsrat, a body which, among other things, consists of the provincial administrators (heads of the states), has the right to make proposals. The term of office is 12 years.

During the revolution of 1848/49 in the Austrian Empire , the Hungarian government under Prime Minister Lajos Kossuth refused to recognize the new monarch Franz Joseph I as King of Hungary . Franz Joseph succeeded Emperor Ferdinand I (or Ferdinand V as Hungarian ruler) in December 1848 , who had abdicated. On April 14, 1849, declared Hungarian Diet the independence of the country and the House of Habsburg-Lorraine in Hungary deposed. Kossuth was elected imperial administrator with dictatorial powers. With Russian help, the Austrians succeeded in suppressing the Hungarian uprising in the following months. On August 11, 1849, Kossuth was finally forced to renounce the title and a little later to flee abroad.

In 1867 the Kingdom of Hungary was offered a special status. With the Austro-Hungarian Compromise , the Austrian Empire was transformed into the Austro-Hungarian Dual Monarchy . 1918, which solved kuk monarchy of Austria-Hungary in several new states. After a brief republican interlude under Mihály Károlyi and the Soviet republic under Béla Kun, Hungary remained a kingdom. After the overthrow of the Soviet Republic, Joseph August of Austria proclaimed himself imperial administrator on August 5, 1919 and held the office until August 23. On March 1, 1920, the parliament appointed Admiral Miklós Horthy as Reich Administrator ( kormányzó ).

In 1921 King Charles IV , who did not abdicate on November 13, 1918, but only renounced his share of state affairs, made two attempts at restoration from Switzerland. His support in the country was too little to make a success possible. The neighboring countries, which included ancient Hungarian territory, threatened to invade. The imperial administrator therefore refused to hand over power to the king . On November 6, 1921, the Hungarian parliament decided to dethrone the House of Habsburg . From then on, Hungary was de facto a kingdom without a king - the joke was circulating in Hungary at the time that an admiral without a fleet ruled a country without a coast as a kingdom without a king.

In order to inherit his function as head of state, Miklós Horthy had his older son István Horthy elected by the Hungarian parliament as "deputy imperial administrator" ( kormányzóhelyettes ) in February 1942 . However, before Horthy could complete his plans and secure his son's succession, he had a fatal accident on August 20, 1942. After Horthy was forced to resign in November 1944, the leader of the fascist Arrow Cross movement, Ferenc Szálasi , practiced the office of head of state until the end of the war in 1945 as “ leader of the nation ” and prime minister, although his functions as a council of state or government council (instead of a single Reich Administrator) were perceived.

After the communist seizure of power in 1945, the Kingdom of Hungary still existed formally until February 1946, but the function of the non-existent monarch was no longer exercised by an imperial administrator, but by a "Supreme National Council".

Similar conditions also prevailed in 1918/19 in Finland , which had belonged to the Russian Empire as a Grand Duchy from 1809 to 1917 . After the last Tsar Nicholas II abdicated in March 1917, the Finnish parliament declared the country to be independent in December 1917, without deciding on the final form of government. The leading minister Pehr Evind Svinhufvud also served temporarily as head of state. After the German-Russian peace of Brest-Litovsk , Finland came under the influence of the German Empire for a short time in 1918 . This led to the proclamation of the Kingdom of Finland in May 1918, for which Svinhufvud assumed the function of an imperial administrator or regent (Finnish: valtionhoitaja , Swedish: riksföreståndare ) until a monarch who had yet to be elected took office. In October 1918, the Finnish Reichstag elected the German Prince Friedrich Karl von Hessen as king. He initially accepted the election, but never took office due to Germany's defeat in the First World War and the November Revolution of 1918. In December 1918 he formally renounced the crown.

At the same time, the previous imperial administrator Svinhufvud resigned and was replaced by the Commander-in-Chief of the Finnish Army , General Freiherr von Mannerheim . While Svinhufvud had to work primarily with the Germans to secure Finland's new independence, Mannerheim was now concerned with the international recognition of Finland as a sovereign state by the democratic victorious powers of the Entente . The outcome of the world war made the maintenance of a monarchical form of government obsolete. In July 1919 Finland was therefore proclaimed a republic and Reichsverweser Mannerheim was replaced by an elected president.

After the assassination of the tsarist family , Admiral Alexander Wassiljewitsch Kolchak was appointed Supreme Regent ("Reichsverweser") of Russia (1918-20).

In Sweden , imperial administration was exercised by the Jarl in the 13th century and by the Drost in the 14th century . In 1438 the term Riksföreståndare was used for the first time , and it still exists today. During the Kalmar Union , the head of the empire developed into an independent office that not only represented the king of Sweden but also replaced the king. Between 1470 and 1523 imperial rulers ruled with only brief interruptions (1497–1501 and 1520/21).

With the election of the head of the Reich Gustav Wasa as king in 1523 the office was abolished. The title was taken up again from 1595 to 1599 when Duke Karl took over the government in Sweden in place of King Sigismund , and in 1809 when Duke Charles replaced King Gustav IV Adolf .

According to the Swedish constitutional law on the form of government from 1974, the head of the empire is now the king's deputy if the king is prevented from exercising his office or the heir to the throne is not of age. The head of the Reich is appointed by the Reichstag. He is a member of the royal family according to the principle of succession or - if no such person is available - the President of the Reichstag .