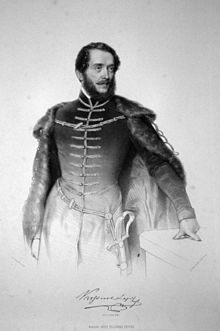 Lajos Kossuth de Kossuth et Udvard [ ˈlɒjoʃ ˈkoʃut ] (also Ludwig Kossuth ) (born September 19, 1802 in Monok , Semplin County , Hungary ; † March 20, 1894 in Turin , Italy ) was a lawyer , politician and in the years 1848/49 one of the leaders of the Hungarian uprising of independence against Austria . Even after the suppression of the revolution, he campaigned for Hungary's independence from the Austrian Empire (from 1867 Austria-Hungary ) in exile until his death . To this day, Kossuth is considered a Hungarian national hero .

Kossuth came from an unpaid family from the Hungarian petty nobility. Like his father, after four years of law studies in Sárospatak and Pest , he embarked on a career as a lawyer ; from 1824 to 1832 he worked in this capacity in Sátoraljaújhely ( Semplin County ). Kossuth's political career began at the same time: from 1825 to 1827 he represented Count Hunyady, who was inclined to be nationally liberal, in the Pressburg state parliament ; He took on the same task from 1832 to 1836 for three members of the Hungarian manor house. In his position as a representative, Kossuth did not have any voting rights; however, he had a duty to keep his sponsors informed about the negotiations. For this purpose, Kossuth first wrote the "Reports from the State Parliament" from December 1832, and then from July 1836 to May 1837 the "Reports from the Municipalities", in which he recorded the state parliament and county assemblies. Because he reproduced these works in copies and thus deliberately defied a government ban, Kossuth was charged with high treason and sentenced on May 5, 1837 to four years imprisonment. After his pardon in 1840, however, a year later he again published the national liberal newspaper Pesti Hírlap , of which he was editor-in-chief. 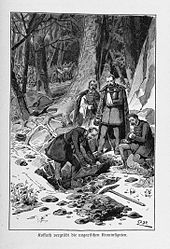 At the beginning of the March Revolution of 1848 in the Austrian Empire, in a speech written on March 3, 1848, he called for the constitutional transformation of the monarchy and constitutions for the Austrian states. In the course of the revolution he radicalized his ideas to the point of calling for and finally fighting for Hungary's independence from Austria. In 1848 he was finance minister and chairman of the defense committee in the first independent Hungarian government under the liberal prime minister Lajos Batthyány . As a defining force in this government, he implemented reforms such as the peasant liberation . He built up a Hungarian volunteer army ( Honvéd ) against the uprisings of the non-Magyar ethnic groups , which was primarily intended to keep the Croats under the leadership of Ban Josip Jelačić in check, who opposed the nationalist Magyarization policy of the time and, in the Hungarian half of the empire, the national Croatian interests and represented the interests of Austria. With its politics, Hungary increasingly distanced itself from Austrian supremacy.

Kossuth statue in Debrecen in front of the Great Reformed Church , where the state parliament once met with Kossuth.

The armchair in which Kossuth proclaimed Hungary's independence on April 14, 1849 is still exhibited in the Great Reformed Church in Debrecen and is an object of Hungarian Kossuth veneration.

After the resignation of the Austrian Emperor Ferdinand I as a result of the revolutionary events in Austria since March 1848, Hungary refused his successor Franz Joseph I the Hungarian royal crown in December 1848 . When the emperor wanted to impose a constitution on March 7, 1849 , there was a Hungarian uprising of independence against Austria, until Kossuth proclaimed Hungary's independence on April 14, 1849 and Debrecen became the seat of the Hungarian government. In the great Reformed Church of Debrecen, the Hungarian parliament met under Kossuth's chairmanship. Kossuth was elected Hungarian imperial administrator and as such had dictatorial powers. The Hungarian revolutionary army , which was strengthened by free troops and Polish emigrants, was initially able to push back the invading Austrian army under the leadership of Prince Alfred I. zu Windisch-Graetz . Finally, with the assistance of Russia , Austria succeeded in stifling the Hungarian struggle for freedom. Pressed by Russian troops from the north and east, Croatian troops from the south and Austrian troops from the west, the Hungarian War of Independence was finally put down and Hungary returned to Austrian sovereignty.

After the crackdown on the Hungarian Revolution and the War of Independence, 13 generals and officers in Arad and the former Prime Minister Lajos Batthyány were executed in Pest on October 6, 1849, the first anniversary of the Second Vienna Revolution . Since the Austrian officers toasted the execution with beer, it was not right to toast with beer in Hungary for a long time.

Lajos Kossuth was able to flee into exile and initially went to the Ottoman Empire , where he initially settled in Shumen with other companions . After several stops in exile, he was employed as a Freemason in England on February 19, 1852 at the Cincinnati Lodge No. 133 , where the next day he was promoted to the degree of companion and the master's degree. There he met the Freemason Giuseppe Mazzini , one of the leading figures of the revolutionary-democratic wing of the Italian unification movement of the Risorgimento , and in London he took part in its founding of the European Central Committee of Democracy. Thereupon Kossuth followed him to Italy, where he continued his fight for (not only) Hungary's independence. Among other things, he set up a Hungarian legion which, under Giuseppe Garibaldi , took to the field against Austria in the Northern Italian struggle for independence of the Risorgimento.

In 1867 Lajos Kossuth was given amnesty as part of the Austro-Hungarian Compromise , as a result of which Emperor Franz Joseph I of Austria was crowned King of Hungary. As an opponent of this compromise, Kossuth remained in exile in Italy. Without having achieved his goal during his lifetime, he died on March 20, 1894 at the age of 91 in Turin. 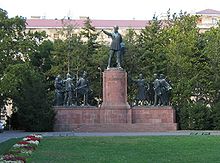 Kossuth statue at the Parliament in Budapest

After his death, Kossuth received late rehabilitation from Austria. Emperor Franz Joseph I had the body solemnly transferred to Budapest, where it was buried with the participation of a large crowd. His eldest son, Ferenc Kossuth , returned to Hungary in 1894, became a politician and Hungarian trade minister.

Hungary, from 1867 in addition to Austria, the second part of the country which now kuk Monarchy (imperial and royal monarchy of Austria-Hungary ), gained only after the First World War, its complete independence.

In the immediate vicinity of the parliament building in Budapest there is a statue of Lajos Kossuth by the Hungarian sculptor Zsigmond Kisfaludi Strobl .

The Hungarian composer Béla Bartók created a musical monument for him in 1903 with his symphonic poem Kossuth . The state Kossuth Prize awarded in Hungary since 1948 was named after him. Structures such as various bridges bear his name, as do schools and a radio program, Kossuth Rádió , of the state radio.