Garibaldi is a redirect to this article. Further meanings are listed under Garibaldi (disambiguation) . Giuseppe Garibaldi (born July 4, 1807 in Nice , † June 2, 1882 in Caprera ) was an Italian freedom fighter and one of the most popular protagonists of the Risorgimento , the Italian unification movement between 1820 and 1870.

Garibaldi's birthplace in Nice, demolished in 1814

In April 1833 he traveled to Taganrog on the Sea of ​​Azov , where he met Giovanni Battista Cuneo (1809–1875) from Oneglia , an emigrated representative of Young Italy, and dealt with the ideas of Giuseppe Mazzini , a pioneer of Italian nationalism . Towards the end of the same year Garibaldi joined the secret society of the Carbonari in Geneva .

Influenced by Mazzini, and through early ideas of a united Europe under republican-democratic conditions, he took part in an uprising in Piedmont in 1834 . When this failed, Garibaldi was sentenced to death in Genoa and fled to Marseille . 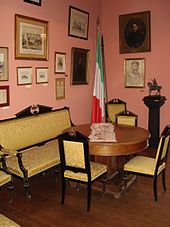 Garibaldi Museum in the Casa Garibaldi in Montevideo

In 1836 Garibaldi managed to escape to South America. There he took part in the Farrapen Revolution in Brazil . In October 1839 he met Ana Maria "Anita" de Ribeiro (August 30, 1821– August 4, 1849) and fell in love. A month later, the couple took part in the skirmishes at Imbituba and Laguna. In 1841 they retired to Montevideo and married there on March 26, 1842. Garibaldi bridged the time as a trader and schoolmaster. He received a naval command from Uruguay in 1842 and set up a small Italian legion in the war against the Argentine dictator Juan Manuel de Rosas . In 1847 he and his volunteers took part in the defense of Montevideo against Argentina and the former Uruguayan President Manuel Oribe .

In 1848 Garibaldi returned to Europe to take part in the Italian revolutions of 1848/49 . In the short-lived Roman Republic proclaimed on February 9, 1849 , he was the leader of the Revolutionary Army. His campaigns made him a popular national hero. He could with his troops in April of that year in favor of the fled Pope Pius IX. stop the intervening French army . Then he had to give way to the superior force of the French who besieged Rome for months. After the surrender of the Roman Republic on July 3, 1849, he had to flee and was pursued by the French and Austrian troops. With a small group of followers, he made his way to San Marino and, in spite of keen pursuit, came to Piedmont .

Garibaldi fled abroad again, this time to New York , USA . In 1854 he returned to Italy.

The writer Marie Espérance von Schwartz had already been in correspondence with the widowed Garibaldi after the death of his first wife Anita in 1849 , but it was not until autumn 1857 that she entered into personal relationships with him, who had set up his domicile on the island of Caprera . She then lived with him, looked after his children, supported his cause financially and looked after him during his imprisonment and after his wounding. She was generally considered to be his mistress; Garibaldi is said to have asked for her hand several times. In gratitude for her self-sacrificing friendship, he gave her the manuscript of his memoir, which she quickly translated into German and published in 1861 before her competitor Alexandre Dumas .

The noble Giuseppina Raimondi (1841-1918) was Garibaldi's second wife. The two married on January 16, 1860 in Fino Mornasco , the place of origin of the Raimondi; however, the much younger marquise was already pregnant from another relationship. The deceived Garibaldi could only have this marriage annulled after a long legal battle.

A third marriage was Garibaldi with his nanny Francesca Armosino (1848-1923); she was of Armenian origin and emigrated to Italy. He had three other children with Francesca, who was almost 40 years his junior and with whom he had had a relationship since 1866. The couple stayed together on Caprera until his death.

In the Second War of Independence

After Savoy entered the war against Austria on the side of France , Garibaldi saw the time had come to intervene militarily with his Italian volunteers. In March 1859 he marched with his 3,000 Alpine hunters ( Cacciatori delle Alpi ) on the southern border of Lombardy . On May 26th he was able to throw back an Austrian brigade near Varese . His inexperienced volunteers were surprisingly attacked and dispersed on June 15 near Treponti by an Austrian brigade under Lieutenant Field Marshal Karl von Urban . 120 men were killed on the Italian side and another 70 were taken prisoner. After the French victory at Solferino , Lombardy was annexed to the Kingdom of Sardinia. 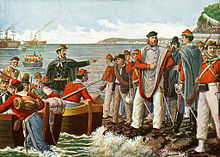 Garibaldi was now trying to advance his unification work in southern Italy. On May 5, 1860, he sailed south from Genoa with a thousand so-called red shirts to conquer Sicily and Naples (“ Train of a Thousand ”). On May 11th, he landed at Marsala , on the western tip of Sicily. In the Battle of Calatafimi on May 15, 1860, his red shirts defeated the troops of the three times superior Neapolitan general Landi. A popular uprising that broke out met him during the occupation of Palermo . He made a rapid advance on Messina and, after his victory on July 20th at Milazzo, brought all of Sicily under his control. Garibaldi declared himself dictator of Sicily on behalf of Victor Emmanuel II , King of Sardinia-Piedmont . The Neapolitan general Carlo Filangieri wanted to gather 40,000 soldiers in a Sicilian bridgehead near Messina against the invaders, but the weak King Francis II could not bring himself to vigorous operations in view of the unreliability of his troops.

On August 8th Garibaldi crossed over to the mainland and occupied Naples on September 7th without a fight; 23,000 men had already defected to him. On September 19, his vanguard stood before Capua under his chief of staff Wilhelm Riistow . After his victory on October 1, 1860 in the great battle of the Volturno , in which his front line intervention played a significant role, the end of the Kingdom of Naples was sealed. On October 26th, 1860, the legendary meeting between Victor Emanuel II (King of Sardinia-Piedmont) and Garibaldi took place in Teano near Naples, at which Garibaldi welcomed and recognized the Piedmontese monarch as "King of Italy".

Operations against the Papal States

His planned further advance on Rome would now have France under Emperor Napoléon III. , the protector of Catholicism , and thus jeopardized the alliance between Sardinia-Piedmont and France. The Prime Minister of Sardinia-Piedmont, Camillo Benso Conte di Cavour , therefore decided to intervene in southern Italy with Sardinian-Piedmontese troops. After General Enrico Cialdini's army marched into the Papal States , a quick agreement was reached: in view of the approval of the majority of the population for an affiliation to the Kingdom of Sardinia-Piedmont, Garibaldi handed over his profits in Sicily and Naples to King Victor Emanuel II.

Rome was considered by the nationalists to be the natural capital of Italy and therefore remained Garibaldi's destination. During his first campaign on August 29, 1862, he was defeated by troops under Emilio Pallavicini in the battle on Aspromonte , seriously wounded in the right ankle and, after a short stay in the prison of Varignano near La Spezia , retired to his domicile on the island of Caprera . Garibaldi's popularity, his charismatic effect on the masses and his campaigns remained of great importance for the further unification of Italy. 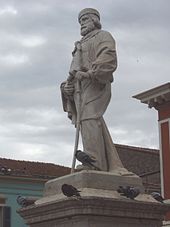 End of the wars of independence

In the Third War of Independence against Austria Garibaldi tried again to achieve success. On July 21, 1866, north-west of Lake Garda , he was able to defeat the Austrian troops of General Franz Kuhn von Kuhnenfeld near Bezzecca .

It was not until October 1867 that Garibaldi tried to take an active part in politics again after his temporary retreat; with a few troops he tried again to take Rome. However, his units were repulsed on November 3, 1867 near Mentana by troops of the Pope under General Hermann Kanzler and their French auxiliaries. It was not until September 20, 1870 that a strong army under General Raffaele Cadorna finally succeeded in taking the city. After the freedom of the pontificate had been guaranteed, Rome could become the new capital of the now unified Italy on July 1, 1871. 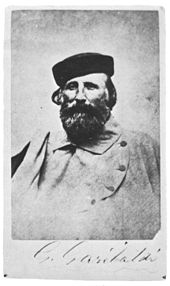 Giuseppe Garibaldi around 1870, photo by Nadar

In 1870/71, during the Franco-Prussian War , Garibaldi, supported by his sons and son-in-law, put together an Italian volunteer corps again. He intervened in Burgundy (unsuccessfully) against the Germans in order to support the new French Republic . In gratitude, he was appointed a member of the French National Assembly for Côte-d'Or , Paris , Algiers and Nice in 1871 . However, he advocated a return of Nice to Italy (Nice and Savoy had been ceded to France by Sardinia-Piedmont in 1861 in return for military assistance in the war against Austria). Therefore, his appointment was reversed. Victor Hugo then resigned his mandate as a member of parliament in protest.

Garibaldi went into exile because he refused the connection between Nice and the Third French Republic . He died on June 2, 1882 in Caprera (Sardinia). In his will he had requested his cremation (expressly not cremation ), but this provision was not fulfilled.

“Burned and not cremated, understand me. I don't want to go into these ovens, which are called crematoria. "

His grave, the so-called “Compendio Garibaldino”, is on the island. His last residence on Caprera is now a memorial.

In 1844 Garibaldi was accepted by the Les Amis de la Patrie Lodge in Montevideo into the Freemasons' Union and in 1861 moved to the Sebezia Lodge in Naples , which was then renamed Grande Oriente di Napoli . In 1864 a congress was called in Florence with the aim of unifying the grand lodges of Italy. They formed an umbrella organization of grand lodges , the forerunner of the Grande Oriente d'Italia , to whose grandmaster Garibaldi was elected. In 1877 the Freemasons of Italy took part with Masonic banners in a major event at the unveiling of the Garibaldi monument in Piazza Mentana in Florence.

Within the development of Freemasonry, Garibaldi is also known for merging the Memphis and Misraïm rites, which were separated until 1881. The formation of the Memphis Misraïm rite is due to his pursuit.

In his work German History 1866–1918 , the historian Thomas Nipperdey mentions Garibaldi in relation to the emergence of a German nation-state . Nipperdey describes the desire, particularly in social democratic circles, for a national revolutionary state to be founded as a "Garibaldi foundation". Nowadays the modified term “Garibaldi's solution” is used for this. The creation of a nation state “from above”, that is, through reforms, is referred to as the “ Cavour solution ”, following on from the opponent Garibaldi's Count Camillo Benso von Cavour .

There are museums on the person, for example, in the Casa Garibaldi in Montevideo . His long residence on the island of Caprera is set up as a Garibaldi Museum.