from Wikipedia, the free encyclopedia
Sardinian war
Part of: Italian Wars of Independence 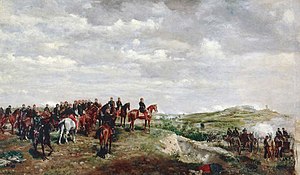 The Sardinian War , also known as the Second Italian War of Independence , was one of the three Italian Wars of Independence . It was established in 1859 between the Austrian Empire on the one hand and Sardinia-Piedmont and the French Empire under Napoleon III. on the other hand led. Napoleon III had encouraged Sardinia to go to war and had the areas of Nice and Savoy promised for his help . Sardinia-Piedmont wanted to liberate the Kingdom of Lombardy-Venetia from Austrian rule and incorporate it into itself. Napoleon's plan was to build a united Italy under French rule.

The war dragged on, however, which brought both the Franco-Sardinian side and Austria into distress. Austria did not succeed in obtaining military support from the German Confederation . Although only non-federal territory controlled by Austria was attacked, the Bundestag could have decided to see a danger for the federal territory. Prussia prevented such a decision because it wanted to extract political capital first.

Austria freed itself from its military-diplomatic predicament by suddenly negotiating an armistice on July 11, 1859. It divided the Kingdom of Lombardy-Veneto and ceded the western part ( Lombardy ) to France while keeping the eastern part ( Veneto ). France transferred Lombardy to Sardinia-Piedmont. Due to the shaking of Austrian rule in northern Italy, other states of Sardinia-Piedmont joined, which finally resulted in the Kingdom of Italy in 1861 . 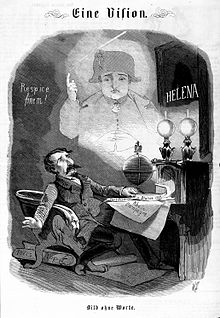 Caricature in the Kladderadatsch , 1859: Napoleon III. With the campaign in Italy ahead of him and a campaign on the Rhine, thanks to the magic lantern, the warning image of his uncle Napoleon I appears to him .

After the experiences of the revolutions and struggles of 1848 and 1849, the government of the Kingdom of Sardinia initiated a phase of reforms and political and military preparations for a renewed Italian struggle for freedom. This policy was largely shaped by the new Prime Minister Camillo Benso von Cavour . By participating in the Crimean War , he managed to put the Italian question on the political agenda of the governments of France and Great Britain , which he regarded as indispensable as an ally in the fight against the great European power of Austria. In July 1858 he concluded with Napoleon III. a secret treaty in Plombières-les-Bains . This provided for French support for Sardinia in the event of an Austrian attack. Cavour claimed northern Italy for Sardinia and went into Napoleon's idea of ​​a confederation of Italy taking into account the Papal States . In return, the Kingdom of Sardinia should renounce its home country Savoy and the county of Nice in favor of France. In addition, the alliance was sealed by the marriage of the daughter of the King of Sardinia, who later became King of Italy, Victor Emanuel , with Napoleon's cousin III, Prince Napoléon "Plon-Plon" .

With his New Year's speech on January 1, 1859 before the diplomatic corps and his words to the Austrian ambassador, Napoleon III provoked. Austria. After a similar speech by King Viktor Emanuel, Austria began military armament. It was able to give France the appropriate pretext to protect the threatened Sardinia against Austria's plans of attack. Cavour's policy was in particular to provoke Austria into a de facto attack, which he succeeded after the peace mission of the British envoy Lord Cowley in Vienna in March 1859 failed and Russia's request for a congress was only accepted by Austria under the impossible condition that Sardinia would unilaterally disarm and would also remain excluded from Congress.

By mistakenly assuming that France was the originator of the tensions to justify its rearmament, the Austrian government tried to gain a head start by hitting it quickly and became a real breaker of the peace by handing an ultimatum on April 19, 1859 in Turin . Sardinia would have to disarm itself within three days or there would be an attack by Austria. Since the answer was negative, the Austrians marched into three places in Piedmont on April 29, under the command of Count Ferencz József Gyulay .

Course of the war

The French army in Italy was about 170,000 strong. It was divided into six corps and was founded by Emperor Napoleon III. self guided.

The army of Sardinia consisted of about 60,000 men and 90 guns, divided into five divisions . It was led by King Victor Emmanuel, who was assisted by Alfonso La Marmora . The division commanders were Generals Castelborgo , Manfredo Fanti , Giovanni Durando , Enrico Cialdini and Domenico Cucchiari .

The Austrians under Feldzeugmeister Ferencz József Gyulay had around 120,000 men and 364 guns at their disposal at the beginning of the war. That strength would have been enough to defeat the Piedmontese army before it could unite with the French army, which had mostly landed at Genoa.

Scenes of Sardinian War, from north to run the rivers Ticino , Adda and Mincio into the Po , a

The Austrian troops established themselves on a long line from Biella to Pavia and stopped here. Instead of going straight to Turin to defeat the small Sardinian army before the French army had marched on, or to turn against Novi to block the only road on which the French could bring help bypassing the Alps, Gyulay did nothing . Meanwhile, Victor Emanuel reinforced his army with the numerous volunteers and Napoleon III pouring in from all over Italy. arrived with his army on the theater of war.

Plan of the Battle of Solferino 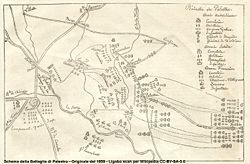 Plan of the Battle of Palestro

On May 29, 1859, the armies of Sardinia and France finally attacked. After the battle of Palestro and Vinzaglio (May 31st) the way to Milan was clear for the allies . Field Marshal Gyulay then let the Austrians go back to the Ticino in forced marches . On June 3, Feldzeugmeister Heinrich von Hess arrived at the army, had Gyulay's orders reversed and ordered that the enemy at Magenta be stopped by a counterstrike. On June 4, 1859, the Battle of Magenta took place , in which the Austrians were defeated.

In the meantime, Emperor Franz Joseph arrived at the theater of war, Gyulay was recalled and he himself took over the supreme command together with Hess. The troubled army was reorganized with newly introduced units. Two armies were formed, one commanded Schlick , the other FZM Wimpffen . On June 23, these armies crossed the Mincio and met the enemy again. On June 24th they were defeated by the Sardinian-French army in the battle of Solferino and Medole . A French-Sardinian coalition with 151,000 soldiers fought against around 133,000 Austrians. While the Austrians lost the bloody battle of Solferino under the command of their young emperor, a corps under Ludwig von Benedek held up the entire Piedmontese army under King Viktor Emanuels II a few kilometers north of Solferino in the battle of San Martino . There, too, the Austrians had to retreat behind the Mincio after heavy fighting under the impression of the situation near Solferino.

At the request of Prussia, the German Confederation mobilized 350,000 men. For this reason and because of the high losses suffered in people and money, Napoleon III ended. the war. His losses would have been considerably higher if he had tried to conquer the fortress square of Mantua , Peschiera del Garda , Legnago and Verona . The preliminary peace of Villafranca (the so-called preliminary peace of Villafranca) was concluded on July 11, 1859.

The Peace of Zurich finally ended the Sardinian War on November 10, 1859. In the Peace of Zurich Austria joined Lombardy with the exception of the fortresses Mantua and Peschiera del Garda on the Mincio , the border river to Veneto, to Napoleon III. from, who then handed Lombardy over to the Kingdom of Sardinia. As a result, the House of Habsburg also had to accept that other Italian possessions were lost, as Grand Duke Leopold II of Tuscany and Duke Franz V of Modena were deposed by referendums in the following year and Italy was unified into a nation state. Veneto with the strategically important northern Italian fortress quadrangle Mantua, Peschiera, Legnago and Verona remained with Austria, to the disappointment of the Prime Minister of Sardinia, Cavour.

After the defeat of Austria, the rule of the Habsburgs also collapsed in the duchies of Modena and Tuscany , which joined Sardinia after the revolutionary upheavals.

In the third Italian War of Independence in 1866, in which Italy stood on the side of Prussia, Veneto fell to Italy, although the Italian side was only victorious at Bezzecca . South Tyrol only became part of Italy as a result of the First World War up to the Brenner border .

The defeat in the Sardinian War shook Austrian neo-absolutism and was one of the reasons for the constitutionalization of Austria through the October diploma in 1860 and the February patent in 1861. As a result of the defeat at Solferino , 60 generals were retired and Ludwig Ritter von Benedek was appointed as the new Feldzeugmeister .

The bloody battle of Solferino gave rise to the founding of the Red Cross . Swiss businessman Henry Dunant happened to witness the battle. The completely inadequate medical care and support as well as the suffering of the wounded soldiers horrified him so much that he completely forgot the original purpose of his trip and spent several days taking care of the wounded and organizing relief measures. Henry Dunant later wrote A Memory of Solferino ( Un souvenir de Solférino ).

An often overlooked side effect of the conflict was that Prussia also mobilized 132,000 men without intervening in the war. The weaknesses that became apparent during the mobilization gave rise to extensive reforms in the army. These formed the basis for the rapid and comprehensive Prussian victories against Austria in 1866 and France in 1870/1 - hence the basis for the unification of the small German Empire under Prussian rule.

The numerous articles by Karl Marx and Friedrich Engels , which the two published on the Sardinian War in the New York Daily Tribune and in Das Volk , a German émigré magazine in London, can be found in volume 13 of the Marx-Engels-Werke (DEA archive) .