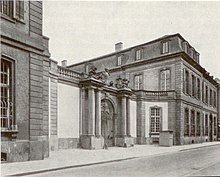 The Palais Thurn und Taxis in Frankfurt, seat of the Bundestag

The so-called Bundestag (officially the Federal Assembly ) was a permanent envoy congress of the member states of the German Confederation meeting in Frankfurt am Main and its only organ . Its resolutions were federal law . It was brought into being by the federal act passed at the Congress of Vienna in 1815 and was active (with a two-year break as a result of the March Revolution of 1848) until 1866, when the federal government was dissolved .

The chairman of the assembly, the Federal Presidium , was held by the representative of Austria as the presidential envoy. With this office, however, no executive power was connected , only the management of the Bundestag. This met either in the plenary session or in the selective council , which differed from one another in terms of competencies , distribution of votes and voting modalities. Only the plenary could decide to change the basic federal laws if unanimously.

After Prussia occupied the Free City of Frankfurt during the German War , the Bundestag moved to Augsburg . His last meeting took place there on August 24, 1866.

The German Confederation was founded in 1815 after the German states could not agree on a re-establishment of the Holy Roman Empire . The medium-sized and small states largely prevailed: The federal government had only a few powers and the distribution of votes in the Bundestag favored the small states. The Bundestag was a permanent delegates' congress for all member states. Although they retained their sovereignty , they had to submit to federal decrees.

According to the Federal Act , the name of the body was the Federal Assembly, but the name Bundestag became commonplace . The model for this was the Diet of the Old Kingdom . The Palais Thurn und Taxis in the Free City of Frankfurt am Main was designated as the seat of the Bundestag . There in Eschenheimer Gasse it met once a week for the first time on November 5, 1816.

In the March Revolution of 1848, the Bundestag first tried to reform the federal government through a large number of resolutions . B. to set up a federal executive. However, the view prevailed that such tasks should be left to a national assembly elected by the people. In July 1848, the Bundestag declared its previous activities to be terminated and transferred its powers to the Provisional Reich Government of the then emerging German Reich . After the suppression of the revolution, Prussia tried to unite Germany in the Erfurt Union . In May 1850, a rump federal parliament met under Austrian leadership, but Prussia did not recognize it as a quorum. After the autumn crisis of 1850 , however, the Bundestag was reestablished in the summer of 1851, finally through the federal reaction decision .

In the many proposals for reforming the German Confederation , the Bundestag was often divided: in the Frankfurt Reform Act, for example, it would have been replaced by a federal government, a kind of indirectly elected parliament and a college of princes. After 1866, the Bundestag had no successor in the legal sense, but the Bundesrat in the North German Confederation (and then in the Empire) was modeled on it. 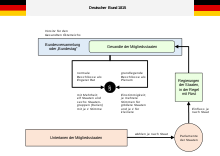 The Federal Basic Laws only provided for the Bundestag as a federal body that combined executive and legislative functions.

The German Confederation was a confederation of states with federal features. The members were the German states and not the princes - despite different rhetoric, for example in the preamble to the federal act , according to which the princes and free cities had united in a permanent union. The states were represented by their governments.

A government sent a representative (envoy) to the Bundestag, comparable to an ambassador. Accordingly, the ambassadors and their homes were extraterritorial . The envoy received his instructions from his government and could be recalled at any time. There were also envoys who represented several states. The Bundestag was therefore a representation of the member states and not a parliament with members who would have exercised their own mandate .

Each government could submit proposals and had the right to speak in the Bundestag. Austria or its representative, who was named President's envoy, chaired the meeting. This meant that he ran the business and collected and passed on suggestions to the other envoys. In the event of a tie, his presidential vote was decisive; apart from that, the presidential envoy had no special powers. The Bundestag was allowed to have its own rules of procedure.

The envoys met either as a general council or as a plenary session. That depended on the matters dealt with and had consequences for the vote. The votes were also distributed differently.

The inner council (actually the inner assembly ) was responsible for all questions that were not reserved for the plenary. All matters, including plenary matters, were discussed here and a simple majority was used to vote. He also determined which matters were plenary matters and prepared those decisions.

The plenary session of the Bundestag had no discussions , only votes. A two-thirds majority was required for a resolution. Plenary matters were:

The following applied to both the council and the plenary: unanimity was necessary when it came to the following matters:

If a decision concerned jura singulorum (individual rights) of member states, it was only valid if the member state in question agreed.

There were 17 votes in the Select Council, eleven of which were virile votes for one state each and six curial votes for several states each.

Each had a virile voice in the council:

The smaller states were divided into six groups and voted within them. These curiate voices are composed as follows:

In the plenum of the Bundestag there were 70 votes, which were distributed among the various states depending on their size: