The determinations made in 1701 lasted with minor changes until the end of the monarchy. The continuity was only interrupted by a short interim phase from 1848 to 1850, in which only the Mecklenburg-Schwerin part of the country took the first step towards a modern constitutional state with a constitutional monarchy and thus ultimately failed.

The Hamburg settlement of March 8, 1701 attempted to impose a peace obligation on the rulers of both parts of Mecklenburg, not to interfere in the internal affairs of the other part of the country, and to act amicably on all foreign policy issues. However, the practice was different. Especially in the first decades of coexistence, the sovereigns violated the agreements. The political primacy of the (grand) dukes from Mecklenburg-Schwerin, defined in 1701, repeatedly gave rise to differences. Unclear legal conditions, paired with a political trial of strength between sovereigns and united estates for positions of power in the Mecklenburg state, brought Mecklenburg to the brink of fratricidal war again in 1752/53. It was not until the “ Land Constitutional Hereditary Comparison ” of 1755, almost a declaration of surrender of the sovereignty, that the situation calmed down and provided the basis for the rather peaceful coexistence of the two parts of the country until the fall of the Mecklenburg monarchy in 1918.

As a limited autonomous part of the entire state of Mecklenburg, Mecklenburg-Schwerin did not have its own parliament. The state parliament in Mecklenburg was a joint institution and, as the highest political authority, was equally responsible for both parts of Mecklenburg.

The ordinary parliament of the Mecklenburg state met once a year alternately in Sternberg (for the old Duchy of Schwerin) and Malchin (for the old Duchy of Güstrow ). In order to reach a decision, however, it was customary for the Ritter- und Landschaft von Mecklenburg-Schwerin to hold its own preparatory meetings, called convents, independently of this, but these had no political powers and only served the purpose of representation and opinion-forming.

A modern parliament consisting of elected members only existed in Mecklenburg during the monarchy during a short interim phase in the course of the revolution of 1848/49 . After the state part of Mecklenburg-Strelitz had left the democratic renewal process, the state constitution for Mecklenburg-Schwerin was promulgated in 1849 , with which a constitutional monarchy with a two-chamber parliament was to be initiated. After the failure of the revolution, at the instigation of Mecklenburg-Strelitz and pressure from Prussia, the old legal status was restored with the Freienwalder arbitration award in 1850.

At the end of the 19th and beginning of the 20th centuries, the Grand Dukes and their ministers of state made efforts to enact a modern constitution for the country. All such attempts regularly failed due to the resistance of the estates.

Grand Duke Friedrich Franz IV and his Minister of State Adolf Langfeld had prepared the promulgation of a new constitution for the Landtag to be convened in November 1918 . The legal basis for the introduction should be the medieval right of the sovereign to enact laws in emergencies. Due to the extinction of the Mecklenburg-Strelitz line in the male line capable of following the throne a few months earlier, the situation was favorable. The November Revolution also eliminated the monarchy in Mecklenburg and made these plans superfluous.

A modern administrative structure, as z. B. was introduced in Prussia after the wars of freedom, never existed in the Mecklenburg (grand) duchies.

As a result of the 1848 revolution, new state administration structures arose in Mecklenburg-Schwerin. Since October 15, 1849, the Grand-Ducal Government had a (overall) ministry with its seat in Schwerin, which from 1853 was called the State Ministry . There were four ministries:

Ministers of State (No. 1., 2.) and Councilors of State (No. 3., 4.) presided over the ministries as single heads . The overall ministry was chaired by a minister of state (comparable to a prime minister) who, as specialist ministries in personal union, usually headed the foreign and interior ministries.

The military was under the direction of the Grand Ducal Military Department , whose chief, a general , had a seat and vote in the State Ministry when it came to advising on military matters.

As the highest church authorities of Mecklenburg-Schwerin, the upper church council took the place of the consistory based in Schwerin in 1848 . The Oberkirchenrat was under the supervision of the Ministry of Justice, Department for Spiritual Affairs, and was directly subordinate to the sovereign in his capacity as Oberbishop.

The so-called court budget or the ministry of the grand ducal house, which performed all the tasks of the court state and marshal office and was not part of the government, did not belong to the state ministry.

In addition there were the three state monasteries Dobbertin , Malchow and Ribnitz , each with extensive property, all of which were in Mecklenburg-Schwerin. Since the Reformation , they have been used as women's pens for the knights and the countryside to care for unmarried daughters of the local nobility.

All of these ownership structures produced their own administrative structures: domanial and knightly and monastic offices. The seaside city of Rostock had a special status among the cities . Wismar, the second seaside town in Mecklenburg-Schwerin, only returned to the Mecklenburg regional association from 1803 from Swedish administration. Two of the three old Mecklenburg fore towns were in Mecklenburg-Schwerin (Güstrow, Parchim). They had representative functions for all rural towns in the Mecklenburg state that were eligible for parliament and had a special priority. 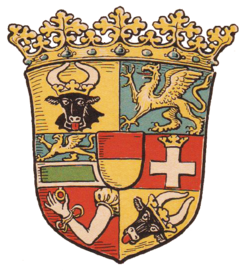 Coat of arms of the Free State of Mecklenburg-Schwerin

The state parliament of the Free State of Mecklenburg-Schwerin had its seat in Schwerin. The first session of the Constituent Assembly took place on February 21, 1919. The state parliament was constituted after the election in June 1920. The legislative period lasted three years. There was proportional representation , but with closed lists. The calculation methods were carried out using the D'Hondt method . In total, there was only one constituency that encompassed the entire Free State.

Thomas Mann's novel Royal Highness is set, without mentioning it, in the - poetically, of course, 'edited' - Grand Duchy of Mecklenburg-Schwerin.