The Klarissenkloster - also Sankt Klaren Kloster Ribnitz , Kloster St. Claren - was a monastery of the Poor Clares and after the Reformation it was an evangelical women's monastery in Ribnitz, a current district of Ribnitz-Damgarten in Mecklenburg-Western Pomerania. 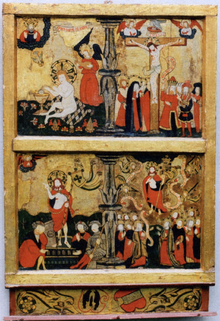 The monastery was created on the basis of a foundation made by Heinrich II of Mecklenburg in 1323/24 . Construction of the monastery began in 1325, and the first nuns moved in as early as 1329. The first four of them came from the Poor Clare Monastery in Weißenfels . Heinrich's daughter Beatrix (Beate von Ribnitz) became the first of a series of princely abbesses. Until she had reached the required age, two of the nuns from Weißenfels administered the monastery one after the other.

The monastery temporarily housed up to 60 nuns. The cura monialium , the “care for the nuns”, was the task of the Franciscans from the convent in Wismar , which belonged to the Saxon Franciscan Province ( Saxonia ). As guardians, they represented the nunnery in terms of church and civil law and were active as confessors in the monastery. In 1522/23 the Franciscan reading master Lambrecht Slagghert wrote a chronicle of the monastery. Together with the nuns, he created devotional pictures, six of which have survived.

The monastery existed as a Catholic religious order until well after the Reformation - which was associated with the closure and secularization of all monasteries in Mecklenburg - and ultimately until the death of the last abbess Ursula von Mecklenburg , a daughter of the Mecklenburg Duke Heinrich V , in 1586. Abbess Ursula managed the monastic economy very successfully.

The German Amber Museum is located in the former dominatrix apartment and the adjoining conventual interior apartments . After a lengthy renovation, an exhibition on the history of the monastery and monastery will be shown in the monastery church from May 29, 2010. North German wooden sculptures and the finds that came to light under the nuns ' stalls during the restoration of the nuns' choir in 2001, the so-called Nonnenstaubb , a find similar to the stalls found in Vienna , but smaller in scope, under the rows of seats of the nuns in the choir, are exhibited. The exhibition also leads into the piety history of the Protestant canon ladies and shows a collection of the Mecklenburg monastery orders.

Only the church from the end of the 14th century has been preserved from the original monastery complex. It is a simple one-nave brick building with six cross-ribbed yokes . The east and west gables are decorated with blind arches, and a small tower has been added in front of them. In the nave is the sandstone epitaph for the last abbess of the Poor Clare Convent Ursula Duchess of Mecklenburg, created after 1586 in the workshop of the Güstrow master builder Philipp Brandin . The neo-Gothic interior of the church dates back to the years after 1840. The organ was built in 1839/40 by the Rostock organ builder Heinrich Rasche .

In the church today the exhibition "Lady of the world, but also a nun - from the Poor Clare monastery to the aristocratic women's monastery, to the monastery and monastery history" is shown.

In the 1720s, the demolition of the medieval cloister building began. Apartments for four women were built on the foundations of the dormitory and refectory . Additional spacious apartments were built for the other eight women in the late 18th and 19th centuries. In 1892 a new building for the monastery administration (kitchen master's house) was completed. The medieval previous building at another location was demolished in 1893. The convent hall, which was designed with elaborate stencil painting in 1892, has been preserved in the kitchen master's house.

The German Amber Museum is located in the house of the head of the monastery (Domina) and in the adjacent buildings .

Digitized version of the copy from the Bayerische Staatsbibliothek , no more published