The emblem of the order shows a cross made of wood, underneath two arms with stigmata, one in a monk's habit (Francis) and one naked (Jesus), cross over a cloud 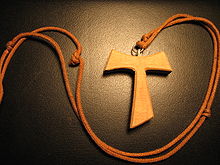 The Franciscans ( order abbreviation : OFM; Latin ordo fratrum minorum , German  Order of Friars Minor ) are a Catholic Franciscan reform order. Today they form - alongside the Capuchins (OFMCap) and the Minorites (OFMConv) - one of the three branches of the First Order of St. Francis . In French, the Franciscans are called Cordeliers because of the zingulum on their religious clothing .

From the foundation to the 16th century

Francis of Assisi (1181/1182 to 1226) founded the Order of Friars Minor , which was founded around 1210 by Pope Innocent III. was recognized. Over the centuries this order branched out in many ways (compare the overview article Franciscan Orders ). The Chronica XXIV Generalium was created around 1370 .

Today's Franciscans (OFM) emerged from the observance movement , whose first groups arose around the middle of the 14th century in Italy, but soon also appeared in Spain and France. Characteristic for this movement, which at that time also appeared in other orders, was the return to a stricter observance of the original order rule. This included a strict adherence to the ideal of poverty and a turning away from the cities and settling in hermitages. They also took up the original Franciscan itinerant sermon, in which they denounced the social grievances of the time. These groups, to which z. B. Bernardine of Siena , Johannes of Capestrano , Albert of Sarteano and Jakobus von der Mark , were popular and, also due to the weakening of the original tribal order, the so-called conventuals, were affected by various external influences ( Hundred Years War , the plague in cities, the occidental schism ), quickly to a majority in the order.

Their religious zeal, strict observance of the ideal of poverty and their advocacy for the interests of the poorer classes soon earned the observants the recognition of ecclesiastical and secular princes and the population. In its Constitution Supplicationibus in 1414, the Council of Constance allowed the brothers of the strict observance (stricta observantia regularis) to settle in all provinces of the order and to accept religious men willing to reform. In 1415 the French observants were given permission to elect their own commissarius , who remained subordinate to the general minister of the Franciscans, but was in fact a separate superior. In other countries, too, they received their own rights. This independence, which endangered the unity of the order, subsequently led to rivalries and disputes within the various groups in the order as a whole. Attempts at unification and reform were made time and again - such as the Martinian Constitutions of 1430 named after Pope Martin V - but they did not lead to success, so that a separation was inevitable.

Separation into observants and conventuals from 1517

This separation was carried out and confirmed on May 19, 1517 by Pope Leo X. with the bull Ite et vos in vineam meam (Eng. 'You too go into my vineyard', Matt. 20.4). With this bull, the Franciscan order was divided into two independent branches: the Conventuals (today Minorites , OFMConv) and the Observants (Franciscans, OFM). The Observants, who are a union of several different reform groups such as the Clear, Amaden, and Martinians , are considered in the bull to be the rightful heirs of the original order; they received the order seal and the right to use the name "Friars Minor" (Fratres minores) .

Different views on the application of the rule and the realization of poverty and the different external circumstances in the individual states (e.g. the Reformation ) led in the following decades to the further division of the observants (but also the conventuals) into different groups. In Spain there was even a reunification of a group of Reformed conventuals with the Observants in 1566/67.

Due to the division of the Franciscan order into a cismontane (Italy, Austria, Hungary and Poland) and an ultramontane family (Spain, France, Germany and America), further reform impulses were limited to the respective families and national borders.

At the end of this development there were four independent groups that developed from the branch of the Franciscan Observants: the Observants themselves, the Discalceates, the Reformates and the Recollects.

In the centuries that followed, the Franciscan Observants shared the fate of all Franciscan male orders. They took part in the mission, had to accept considerable restrictions as a result of the French Revolution and the subsequent secularization, and benefited from the phase of new beginnings in the second half of the 19th century, but remained divided all the time. It was not until 1897 that the new Union Constitutions, which were created under pressure from the Vatican, were approved by the General Chapter, and Pope Leo XIII. was able to unite the four families with the Union bull Felicitate quadam on October 4, 1897 to form the new Order of Friars Minor (Franciscans OFM). The following day the entire leadership of the order resigned with their Minister General Aloysius Canali da Parma . The first general minister of the united order was the German Franciscan Aloysius Lauer , who had already chaired the commission for the drafting of the new, common general constitution.

In December 2014 there were reports of serious financial problems and an imminent bankruptcy of the General Order, in-house investigations had revealed "dubious financial operations" and state investigative authorities were called in. Among other things, funds are said to have been invested in companies that are being investigated for illegal transactions, such as drug and arms trafficking. Swiss judicial authorities are said to have confiscated bank accounts of the order. The Franciscan General Minister Michael Anthony Perry described this in an open letter to his friars: the Order “has severe, I underline severe financial problems with a considerable amount of debt”.

The order's approximately one hundred local provinces - including the German Franciscan Province with its monasteries and institutions - are financially independent and therefore not directly affected. Nevertheless, the German Franciscans feel challenged within the framework of the Franciscan solidarity community and demand consistent clarification, a transparent and responsible handling of the material goods by the Order and the improvement of corresponding control mechanisms.

Concerns, characteristics and tasks of the order

Franciscans usually wear a brown habit with a white cingulate .

The Franciscans, like all mendicant orders , live in poverty and earn their livelihood through manual, social, pastoral and educational work. Francis of Assisi writes in his will to his brothers: “I worked with my hands and want to work; and it is my firm will that all other brethren do a craft that is honorable. Those who cannot, should learn [...] ”. Begging also served to support the brothers.

An important part of Franciscan life was pastoral care , which they practiced more intensely than other contemplative orders. Therefore they settled mainly where the need for spiritual care was greatest, in the slowly blossoming cities. Since they still kept the necessary distance from the lay world, their traces can be found mainly in urban fringe areas.

They should proclaim God's word of peace and salvation primarily through example, but also through preaching. Through its exemplary apostolic life, the vita apostolica , the sermon attains a certain degree of credibility. The life of the Franciscan Brothers was and is very modest. The claim to oneself to lead a conscious life with creation is closely related to turning away from earthly wealth. By emphasizing this aspect, the Franciscans have gained an increased reputation since the beginning of the ecological movement in the 1980s. Pope Francis chose Laudato si ' for his encyclical in 2015 . About the concern for the common house on the topic of environmental and climate protection as a title and incipit the beginning of the sun song of St. Francis.

The churches of the Franciscans are kept rather simple as mendicant churches and hardly contain any art treasures. What is remarkable, however, is the size of the buildings that were necessary to provide pastoral care to the growing city populations.

The tau cross , also known as the Antonius cross, is the hallmark of the order chosen by Francis of Assisi. He understood it as a sign of blessing and used it himself as a signature. The Franciscan knots adorn the end of the cord called the zingulum , with which the habit is tied. There are three multiple overhand knots and symbolize the three evangelical counsels of poverty , celibacy and obedience to which every Franciscan undertakes in profession .

Fundamental to Franciscan spirituality is a fraternal life in an evangelical way of life with an apostolic accent turned towards the poor. The tasks that the brothers take on grow from this way of life and must be compatible with it. Therefore, according to the will of Francis, positions of power should remain excluded.

In Central Europe, the Franciscans have mainly taken on the following tasks:

European Franciscans are missionaries mainly in South America and Africa. Until the Second World War, China was also a focus for the engagement of several German religious provinces. In the meantime, indigenous, independent Franciscan provinces have sprung up everywhere, in which indigenous and European brothers work together in "fraternal assistance".

At the head of the order is the Minister General, currently (since 2013) the American Michael Anthony Perry . He represents the order as the successor of the founder of the order Francis internally and externally and is elected by the general chapter of the order for 6 years, one re-election is possible. The General Minister is supported by an elected General Definitory . They form the General Curia of the Order in Rome. Since September 2017 the German Franciscan brother Jürgen Neitzert has been a General Definitor in the leadership of the overall order. The General Curia is assisted by the General Secretariats for “Mission and Evangelization” and for “Formation and Studies” as well as the General Office for “Justice, Peace and Integrity of Creation”; they coordinate the activities of the Order in their field and provide suggestions.

The Order has a federal structure, according to which most of the affairs are regulated by the individual Provinces of the Order; The leadership of the general order has a coordinating, supporting and stimulating function for the provinces. Several provinces exchange ideas in regional, transnational "conferences". The two convents in Turkey and some convents with special tasks for the general order are directly subordinate to the General Curia, likewise the Franciscan University, the Pontifical University Antonianum .

Today the order has one province each in Germany and Austria . In Switzerland there is a custody belonging to the Austrian province .

Up until the merger on July 1, 2010, there were four provinces in Germany: