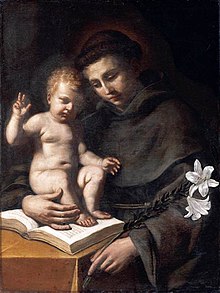 St. Anthony with the baby Jesus, painting by Guercino (1656)

Antonius von Padua ( Latin Antonius Patavinus , baptismal name Fernandus ; * around 1195 (the date of birth is unknown; traditionally August 15 is given; the year of birth is sometimes also assumed to be 1193 , 1191 or "around 1188 ") in Lisbon ; † 13. June 1231 in Arcella near Padua ), sometimes also called Anthony of Lisbon , was a Portuguese religious priest of the Franciscan order . He is in the Roman Catholic Church asVenerated saint and Doctor of the Church .

Antonius came from a Portuguese noble family. In 19th century research it was speculated that his parents were Martin von Buglion (or Bulhen) and Theresia von Tavera and that he had two brothers and two sisters. At the age of 15 he became an Augustinian canon . He studied in Lisbon and Coimbra and was ordained a priest . In 1220 he converted to the Franciscans and took the name of the late antique desert father Antonius Eremita , the patron of the church at which the Franciscan community in Coimbra was active. Following the example of the proto-martyrs of the Franciscan order executed in Marrakech in early 1220 , Antony moved to Morocco as a missionary in order to find martyrdom as well. Because of an illness he had to leave Africa again and was blown to Sicily by a storm . For a while he lived as a hermit near Assisi and took part in the General Chapter of the Franciscans in 1221, where he met the founder of the order, Francis of Assisi .

Antonius stood out because of his extraordinary gift for speech. Therefore, in the autumn of 1223, he was commissioned to preach in Romagna , which was shaken by political unrest at that time and, from an ecclesiastical point of view, was threatened by the spread of the Cathar and Waldensian denominations, which deviated from the Catholic faith .

In a document addressed to Antonius, the text of which has survived and which was probably written around the turn of the year 1223/1224, Francis acknowledged him “my bishop” (Episcopo meo) and allowed him to give theological lectures to the brothers “if only you didn't through this study extinguish the spirit of prayer and devotion ”. 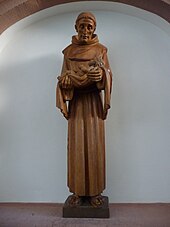 Sculpture in the Church of St. Anna in Heidelberg

Antonius stayed at the University of Bologna for about a year , where he worked as a lecturer in theology for the Franciscans, before moving to southern France in 1225 to preach to the Albigensians there too. He returned to Northern Italy around the year 1227, where he worked as a superior , study director and penitential preacher . Even during his lifetime he was considered the most important preacher of his time.

Exhausted from his numerous tasks and journeys, he retired from his offices in 1230. After Easter 1231 he went on another preaching trip to Padua and spent the last weeks of his life in the hermitage of Camposampiero . He died on June 13, 1231 on his way back to nearby Padua.

Of the numerous writings that were later ascribed to him, research only considers the sermones ("sermons") to be authentic, which contain brief drafts and ideas for Sunday and feast day sermons. Depending on the count, there are between 70 and 250 sermons, which are not fully formulated, but are available as sketches. In addition to being used as a preaching aid, he could also have used his notes in theology class.

In his sermons he used allegorical interpretations of words and vivid images from nature and the everyday environment as “hooks” to explain the beliefs and biblical passages in a meaningful way and to captivate the audience. In the foreword to his collection of sermons he wrote about this method:

“Due to the hollow knowledge of its readers and listeners, our time has come so far that it becomes weary of reading and does not like to listen when it reads or hears not chosen, well-considered and modern-sounding words. That is why I [...] interpreted certain scientific discussions about things and animals and explanations of names for moral life and included them in my work. "

- Anthony of Padua : Prologue of the "Sermons"

It is noteworthy that the compendium does not contain any specific arguments or polemics against heretics, but only explanations of the Christian truths of faith and general warnings to avoid sin . This is in some contrast to the popular legends about the saint, most of which portray him in controversy with heretics .

The creation of legends about the life of St. Anthony began during his lifetime. Even in early sources he is said to have had numerous miracles , such as the sermon given to the fish near the city of Rimini : since his attempt to preach to the townspeople against the teachings of the Cathars failed, the saint addressed his words on the seashore the fish, which, according to tradition, listened to him as reverently as the birds to St. Francis of Assisi.

At the stormy request of the people, Antonius was already eleven months after his death on May 30, 1232 by Pope Gregory IX. canonized , the shortest duration of a canonization process yet. On January 16, 1946, Antony of Pope Pius XII. elevated to a doctor of the church .

The Dominican Bartholomew of Trento was one of the first writers to report on the life of Anthony of Padua. In his writing Liber epilogorum in gesta sanctorum on the deeds of the saints, written between 1240 and 1245, he claims to have known Saint Anthony personally.

Originally restricted to the Padua area and the Franciscan order, it spread mainly in the 14th and 15th centuries and reached its peak in the 16th century. In the post-medieval period it largely supplanted the previously widespread worship of St. Anthony the Great . In the area of popular piety there were often also transmissions: This is how the invocation of St. Anthony of Padua as the patron saint of swineherd on an iconographic attribute of St. Anthony the Great, who was sometimes depicted in the company of a pig.

Above the grave of St. Anthony in Padua rises the mighty Basilica di Sant'Antonio , which contains many art treasures and relics . This church has been the destination of many pilgrims for centuries. There is, among other things, the relic of the tongue of St. Anthony, who, when the relics of the saint were raised in 1263, in the presence of St. Bonaventure is said to have been found intact.

The saint is the patron saint of the cities of Padua, Lisbon, Paderborn , Hildesheim and Menden (Sauerland) as well as the bakers, swineherd, miners, travelers and social workers. He is called in the event of infertility, fever, plague, shipwreck, war troubles, cattle diseases and also to find lost objects (hence the joke nickname "Schlampertoni" in Bavaria or "Schussels Tünn" in the Rhineland). He should also help in finding a partner . B. Single pilgrimages to Padua are offered. This has also been the subject of several TV productions. In addition, it should help to a good birth, to grow old, to a good harvest and to a rich mushroom discovery (mushroom greeting: "Antonius guard '"). He is also considered the patron saint of women and children, lovers, marriage, horses and donkeys. His patronage over the poor is particularly well-known ( donations for the needy are collected under the name Antoniusbrot ).

The feast day of the saint in the liturgy of the Catholic Church is June 13th. It is an obligatory day of remembrance in the general Roman calendar .

On June 13th, a festival in honor of the saint takes place annually in Manatuto , East Timor , in front of Santo António de Manatuto . Men dress up as scarecrows with simple masks made of cardboard, fabric or plastic and wear robes that are decorated with straw. Equestrian games with magnificently decorated Timor ponies are also part of the festival . Moradores and school bands also perform .

In Portugal, too, town festivals and parades traditionally dedicated to Anthony take place. In particular, the celebrations in Lisbon in honor of its patron saint and son of the city should be mentioned: every year on the night of June 13th, large, sometimes carnival-like parades take place on large avenues such as Avenida da Liberdade , but also street parties in the alleys the old town, especially the Alfama .

St. Anthony is shown in the habit of a Franciscan and usually with the baby Jesus , often sitting on a book, in his arm and a lily in his left hand. These iconographic attributes have only been known since the 15th century. The earliest attribute of the saint is the book, in the middle of the 14th century a flame in the hand was added. The best-known attributes of St. Anthony are the baby Jesus, which goes back to a vision of the saint, and the white lily as a symbol of virginity. The depiction with the child goes back to a vision of the saint first documented in 1350. Iconographically, this motif can only be proven from 1500. Probably the oldest surviving depiction of Anthony is a fresco by Giotto in the church in Padua dedicated to the saint .

The remembrance day peasant rules are:

The motif of the fish sermon is taken up and parodied in the folk song collection Des Knaben Wunderhorn compiled by Achim von Arnim and Clemens Brentano in the folk song Des Antonius von Padua Fish Sermon . Although the Pisces are enthusiastic as listeners, they still do not convert:

Antonius for the sermon [sic!]
The church finds single
He goes to the rivers
and preaches to the fish […]

The crabs are going back,
The stockfish remain thick,
The carp eat a lot,
The sermons are forgotten.
The sermon was approved,
you remain like everyone else .

Gustav Mahler set Des Antonius von Padua fish sermon to music in his songs from Des Knaben Wunderhorn . In the third movement of his second symphony , he took up the musical material of the song again.

In 2017 Michael Köhlmeier published the novella The Man Who Finds Lost Things about Antonius von Padua.