A religious priest is a priest who belongs to an order . He makes his profession and lives according to a rule of the order . During a Roman Catholic s diocesan priests the incardination in a diocese featuring a religious priests headed by a religious superior . The Latin word pater is usually used to address him . The broader term regular clerics includes women.

In the Orthodox churches one speaks of priest monk, monk priest or Hieromonachos .

Use in the parish

Many religious priests work in a diocese in pastoral care. You will then be appointed as a parish administrator in the role of a pastor . Wherever religious priests work externally, they are subordinate to the bishop of the respective diocese. The superior of the order determines the assignments and transfers.

Because of the shortage of priests put German dioceses since the mid-1990s strengthened foreign religious priests from Asia , Latin America and Africa as a parish pastoral one.

Use in the Order

Religious priests can also devote themselves to prayer and service to confreres and guests in the enclosure of a contemplative monastery . Their activity is determined by the profile of the Order and the needs of the local Church. The priests in the contemplative orders serve their monastic communities by administering the sacraments , especially the Eucharist and Confession . In their seclusion they bear testimony of God's rule over history and anticipate the glory to come. They live in solitude and silence so that they can listen to the word of God. They practice personal asceticism and prayer. The Church also understands her hidden life to be apostolic ( Vita Consecrata , 8). Additional external assignments are possible in a parish , in a hospital or in a mission .

Outwardly active are the priests of the Canon Regulars , the Mendicant Orders and the Regular Clerics ; But the Benedictine religious priests can also work externally, that is, in missionary work and the various works of charity . Their apostolic activity should also be filled with contemplation ( Vita Consecrata , 9).

Hermits and consecrated virgins practiced the radical form of seclusion . In Anachoretentum the church saw a threat to the emergence of uncontrollable deviations. It therefore promoted coinobitism - communal life under a superior, organized by means of a rule. Their joint application did not lead to organizational cooperation. Self -sufficient individual monasteries determined the development until the 9th century .

Benedict of Nursia wrote the Benedict rule around 540 . It only gradually prevailed against the mixing rules that were mainly used. Ludwig I , Emperor in the Franconian Empire (813–840) recognized the value of standardization and promoted the acceptance of the Regula Benedicti in the monasteries . At the Aachen Synod of 816, Ludwig the Pious declared them to be a binding monastery rule. Commissioned and supported by the emperor, Benedict von Aniane created her actual version between 816 and 819. From then on, Benedictines and Benedictine women (the actual order was not founded until 1893) were synonymous for monk and nun . That didn't mean uniformity and diversity should increase.

The Cluny monastery was founded around 910, in the middle of the dark century ( saeculum obscurum ). Popes murdered their predecessors or came to the cathedra under questionable circumstances , church offices were sold off or bequeathed to the son. The particularly chaotic situation of the kingdoms of Burgundy and France was the Cluniac Reforms on. First the economic power of the convents was restored. It financed the cluniac form of monasticism , which mainly determined magnificent buildings and the celebration of the liturgy . The services of several hours consisted of hourly prayer , music ( choir singing and organ playing ). They were directed less to the believers and more to God , they honored less the living and more the dead. All Souls Day on November 2nd, combined with feeding and giving gifts to the poor, developed in Cluny. The other monasteries were subordinate to the mother abbey , and they all applied the Cluniac Constitution ( Consuetudines Cluniacenses ). The Cluniacians became the first order in the broader sense. Other reform movements spread in Germany : the Fruttuarian ( Fruttuaria Monastery ), Gorzer and Hirsauer Reform . As a result of newly founded monasteries and the connection of existing ones, the influx of novices and conversations , the movements grew rapidly and widely. The vigor lasted for almost two centuries. Then the financial obligations for the remembrance of the dead exceeded the economic possibilities, and the faithful looked less for intensive liturgical celebration. 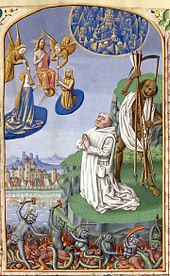 Several pioneers built the Cistercian on: Robert of Molesme , Alberic of Cîteaux and Stephen Harding . For the wider dissemination of the militant caused Bernard of Clairvaux ; Master of Jean Charpentier: Lamentation of St. Bernard , 15th century

In the course of the 11th century the anarchorism, which had never completely disappeared, flourished and many hermitages arose . They satisfied the need for more asceticism, religious loneliness and a harder way of life ( poverty movement ). In addition, the laity demanded a greater say in the church and the women increasingly sought their place in the regular clergy. The church was in crisis. The church reforms of the 11th century prepared the ground for a new beginning. The Carthusians , first founding a monastery in 1084, sought and found a close connection between both basic forms. The Cistercians brought new momentum to monastic coinobism. The starting point was the criticism of the general, especially the Cluniac, interpretation of the Benedict Rule. In 1098 22 monks founded the Cîteaux monastery in inhospitable solitude . Within 20 years, 12 more monasteries followed the example. New methods were needed to guarantee uniformity. Although the association should consist of independent abbeys, it should be closely interlinked through a visitation right of the mother monasteries to the daughter monasteries. The second element was the annual assembly of all abbots in Cîteaux. Filiation system and general chapter produced the first order in the narrower sense. His guiding principles were to combine prayer and work in a balanced way, to live the poverty prescribed by the Benedictine Rule again. The Cistercian women did not form their own order, male and female branches belonged together.

The regular canons and canons shared the beginnings with their secular counterparts. At first there were only canons and canonesses . The reform initiatives that had previously been local reached Rome with the Lateran Synod of 1059. There Hildebrand filed his complaints, his name was later Gregory VII , Pope of the Roman Catholic Church (1073-1085). Before the monastic Benedict rule was considered the measure of all things, the equivalence of the canonical Augustine rule prevailed under Urban II , Pope (1088-1099) . They took over numerous existing or newly founded pens . The communities no longer belonged to the secular , but to the regular clerical branch of the Roman Catholic Church . Instead of a canonical statute, they applied an order rule (and a constitution specifying it). The wave of renewal also hit some German cathedral chapters . The Gregorian reforms of the 11th / 12th centuries Century gave birth to several Augustinian / -Innen -Orden (eg. Augustinian Canons / women , Norbertine / -Innen ) and numerous - Congregations . As an innovation, the Premonstratensians introduced the Order Province , which subsequently became the standard.

The hospital orders arose from the hospital system, mostly communities at individual hospitals . In addition to the three usual religious vows ( poverty , celibacy, and obedience ), the hospitallers often took a fourth. They committed themselves to nursing the sick (and poor relief ). For example, the Order of Antonites and the Order of the Holy Spirit were important .

The orders of knights were a creation of the crusades that began in 1095/1099 . In the 1110s, two brotherhoods organized independently of one another in Jerusalem . The Knights of St. John (1113) and Templar Orders (1129) emerged from them. Originally influenced by the Rule of Augustine, they turned to the Rule of Benedict. There were few priests among the members, but all the more lay brothers . They were divided into knights and servants. The criterion was the time of the accolade , before or after entering the order. Some performed tasks according to Benedictine traditions. The vast majority took care of the protection of pilgrims and roads . Bernard of Clairvaux gave the military force in the name of Jesus Christ , the theological legitimacy. The Cistercian wrote the Liber de laude novæ militæ - book of praise for the new knights. The last decade of the 12th century gave birth to the third of the great - the Teutonic Order . Acre fell in 1291 , the last significant Christian bastion. By then at the latest the activities of the three shifted completely to Europe. Johanniter and German Order were also hospital orders.

The mendicant orders brought about the beginning of the 13th century. Before (most) orders followed the scheme: life in sin - repentance - turning away from the world. Similar to the hospitallers, the mendicants (members of a begging order) added a new scheme to this: life in sin - repentance - fraternal turning to people. The members of the order lived from begging , voluntarily committed themselves to poverty. At first they wandered through the country as non-local wandering monks . The founding of monasteries began later, but mobility remained. The nature of the big ones differed in detail. The Dominicans rely on the good education of their members, the power of words, active conversion and preaching , hence the name of the Order of the Preachers. The Dominican women spread in Germany from around 1226 at the same time as the men. The Franciscans sprang from a movement of lay people without ecclesiastical education. They also did manual labor, worked through exemplified patience and poverty, hence the name Friars Minor. Francis of Assisi inspired a noble daughter in his hometown. Clare of Assisi founded the Poor Clares . Agnes , Princess of Bohemia , was responsible for spreading it in Central Europe . The two connected orders with roots in Assisi received the greatest popularity. The Carmelites and Augustinian hermits tended to avoid the urban religious hustle and bustle and turned more to science and pious contemplation. With the Carmelite Sisters and Augustinian Hermits , both had female counterparts.