Augustinian orders in the narrower sense are orders in the Roman Catholic Church that refer to the doctor of the church Augustine of Hippo . In the broader sense all religious orders are meant that have adopted the Augustine Rule . 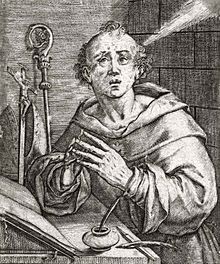 Augustine von Hippo (354-430), a saint and church father of the Roman Catholic Church, did not found an order himself, but rather inspired the founding of orders in later times through his writings. The basic features of his being, as expressed in the Rule of Augustine (about 497), included “godliness and love of neighbor”, “evangelical poverty and humility”, “selfless willingness to serve, patience and kindness of heart”. A few hundred years later, his emphasis on the evangelical council of poverty in particular was felt as a response to pressing church problems.

During the church reforms of the 11th century , numerous cathedral and collegiate chapters introduced life together on the basis of the Augustine Rule. These regulated canons were not monks, but unlike world clerics they lived together as friars and under one rule. The Augustinian Canons emerged from the amalgamations of such communities .

In March 1244, the hermits of St. Augustine formed in Tuscany from several monastic groups, in April 1256 Pope Alexander IV published the Bull Licet ecclesiae catholicae , with which he shared these hermits with other regional communities (the Tuscan hermits, the Janbonites, the Brictinensern and the Wilhelmites) united to form a "great union" - the Augustinian hermits . After the Dominicans , Franciscans and Carmelites , the fourth great mendicant order of the Middle Ages was created.

In 1963 Pope John XXIII. delete the term "hermits" because the hermit life was no longer a hallmark of the order; since then the order has been called the "Augustinian order" and the members of the order "Augustinian".

Augustinian orders in the broader sense

In addition to the four orders that have their mastermind Augustine in their name, there are many other communities that are based on the Augustine Rule. These include on the one hand mendicant orders comparable to the Augustinian hermits, such as the Dominicans, Trinitarians and Mercedarians , on the other hand, regular canons comparable to the Augustinian canons, such as the Premonstratensians (the now largest order of "regulated canons", founded in 1120). The following orders are active in German-speaking countries today:

Already St. Augustine wrote his work Praeceptum for men and for women. The members of Augustinian women religious are also Augustinian nuns called. The following orders are active in German-speaking countries today:

The Franciscan orders are particularly widespread among the third orders . But there are also numerous third orders that refer to the Augustine Rule, for example the Premonstratensian Seriars .