The coat of arms of the Order of the Premonstratensian Canons 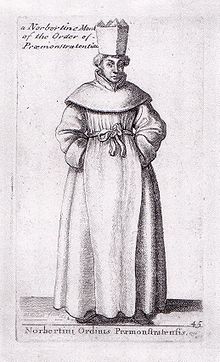 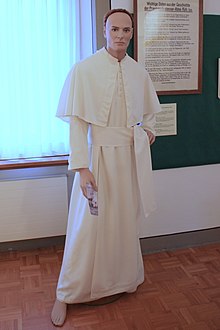 Habit of the Premonstratensian

The founder of the order, Norbert von Xanten, was one of the many traveling preachers in the 12th century who wandered around without property in imitation of the lifestyle of Jesus and his disciples. Numerous followers, men and women, joined Norbert. With them he founded a community in the valley of Prémontré near Laon in 1120, which was based on the ideal of common life in the style of the early church and from which a monastic community soon developed on the basis of the Augustine Rule . Norbert himself kept his life as a traveling preacher and founded other monasteries.

A peculiarity - not unique at this time - of the first premonstratensic communities was that they were double monasteries in which women and men lived, albeit in two organizationally separate convents. Although Norbert was friends with Bernhard von Clairvaux and influenced by the ideals of the Cistercians , u. a. the double monasteries made it clear that the Premonstratensians were originally a very independent movement. Another difference to the monastic orders based on the Benedictine Rule is that the Premonstratensians combined the contemplative monastic life with outward pastoral care (vita mixta) .

The young order experienced a serious crisis when Norbert gave up his poor, but also independent of all institutions, life as a traveling preacher and became Archbishop of Magdeburg in 1126 . Norbert reacted to the disappointment that his change of heart had caused among his followers by giving up his dominant position in the movement of which he was previously the sole leader. Each convent was allowed to choose its own superior. The first abbot of Prémontré, Hugo von Fosses , an old companion of Norbert , gained special significance . It was only through Hugo's organizational work that the Premonstratensian Order came into being in the true sense.

In addition to the canons ( canonici ) , lay brothers ( conversi ) also lived in the settlements of the Norbertines . Similar to the Cistercians, the Premonstratensians contributed to improving agriculture in the first centuries after their formation . Later an aristocratic train prevailed and manual labor was gradually pushed back. Writing and copying books remained important, and teaching also gained in importance.

The double monasteries, originally an essential feature of the order, soon became controversial. In Prémontré itself, this structure was dissolved as early as 1137 or 1141 and the sister community relocated. This is how one proceeded almost everywhere: The double monasteries became two monasteries, one for men and one for women, which were clearly separated from each other. In the second half of the 12th century the order went even further: Now only male monasteries were to be newly admitted to the order, and the existing Premonstratensian convents were to be affiliated with other orders. However, this measure was never implemented consistently.

When the order was recognized by Pope Honorius II in 1126, just six years after its foundation, there were already nine religious houses, and several hundred were built in quick succession throughout Western Europe. Around the middle of the 14th century there are said to have been more than 1,300 male and 400 female monasteries.

The first Premonstratensian monastery was established in German-speaking countries as early as 1122. In that year Otto and Gottfried von Cappenberg handed over their castle and their property to the order for the foundation of the Cappenberg monastery . In the same year, Count Walram II. Paganus von Limburg (1119–1139) donated the Premonstratensian Monastery of Wenau as a double monastery for men and women.

The establishment of Cappenberg resulted in good relations between the young order and the Roman-German king : the noble Cappenbergers were related to the Hohenstaufen dynasty, and the founder of the monastery, Otto von Cappenberg, was Friedrich I's godfather. This personal relationship had an extremely positive economic effect on the entire order . On June 23, 1154, King Friedrich I issued the Premonstratensian Order in the Dortmund Palatinate, which is closest to Cappenberg Abbey, with a privilege according to which the latter was exempted from customs duties throughout the empire.

In 1245, a monastery for Premonstratensian women was founded in the Michelfeld district of the Lower Franconian town of Marktsteft near Kitzingen. This women's convent was subordinate to the Abbot of Oberzell near Würzburg. The Bishop of Würzburg reserved the right to confirm the choice of the prioress. In 1261 the monastery was confirmed by the papal authorities. Because of the decline of monastic discipline, the nuns moved to Tückelhausen, a district of Ochsenfurt, in 1305 .

In the east, the Premonstratensians dedicated themselves primarily to the colonization and Christianization of the Wends and other Slavs east of the Elbe and Oder . The order was also widespread in Bohemia and Moravia . The Olomouc bishop Heinrich Zdik summoned the order to Bohemia in the 12th century and built the Strahov Monastery in Prague for it.

Over time, many rules and customs were interpreted and applied more negligently, leading to various reforms and the emergence of semi-independent communities. At the beginning of the 19th century, the order had almost completely disappeared as a result of the Reformation and several waves of secularization, and only eight houses remained (all in Austria-Hungary ). At the beginning of the 20th century there were again 20 religious houses with around 1,000 priests. Today the order has around 100 branches and is present on all continents.

Character of the community

The Premonstratensians, like the Augustinian Canons and the Canons of the Cross , are regular canons . That is, it is a community of priests with religious vows and not monks. You follow the Augustine rule , so you are an Augustinian order , and take the vows of poverty, abstinence and obedience. Their way of life also largely follows monastic standards. This includes observing the Liturgy of the Hours and the communal meal in the refectory.

A distinction must be made between the members of the Third Order ( Premonstratensian-Tertiary ).

The highest representative of the Premonstratensian Order is the Abbot General. He is the chief superior of all officials and members of the order. He represents the Order externally and before the Holy See . Its main internal task is the cohesion and connection of the Premonstratensian religious houses scattered all over the world. The seat of the Abbot General is the Generalate with the General Curia (Curia generalitia) in Rome. From here the Abbot General and his officials direct the affairs of the Order. He still bears the title Dominus Praemonstratensis (Lord of Prémontré) with the addition of Amplissimus (Most Sublime). His salutation is Monsignor . Traditionally, he is entitled to wear a pileolus , a biretta and a cappa magna in purple.