The habit is the costume of a religious order , mostly in the Catholic Church . But some religious orders of the Anglican Church also wear a habit. The word is derived from the Latin habitus “posture, shape”.

In many male orders the habit consists of a tunic or a cassock and is tied with a belt or a cingulate . For this purpose, the members of many orders wear a scapular . In some orders it is also common to wear a hood or to wear a cup for choir prayer . A mozetta (shoulder throw) or a wide coat, as worn by the Teutonic Order or the Carmelites , can also be part of the habit.

The most common colors are black, white, brown, gray or dark blue. The color and texture of the costume can also vary within an order, if z. For example, mission orders in tropical regions tend to use lighter and lighter fabrics. 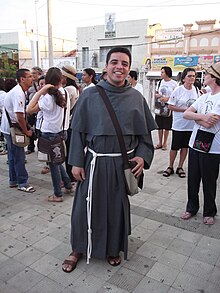 The habit of the Minorites

Benedictines wear a tunic (undergarment), a zingulum (belt), a hooded scapular, and a cup for choir prayer; Augustinian Canons wear belts and Mozetta ; Franciscans wear a brown ( OFM and Capuchin ) or black ( Minoriten ) hooded habit belted with a white cingulum. The habit is sometimes referred to in the Franciscan order as a cowl , the zingulum as a "cord". The hood of the Capuchins - who were initially popularly named after their hoods in papal documents from 1535 - is a little longer and sewn directly onto the habit, with the Minorites and Franciscans it is on a separate collar that is worn over the habit becomes narrower with the Franciscans and wider with the Minorites.

Nuns in Seville. The novice can be recognized by the white veil.

Religious women can almost always be recognized by their veil , which is usually white for novices, usually black after temporary or perpetual profession or has the same color as the habit. Various forms of veil are in use, from a complete covering of the hair and neck to a light head covering attached to the hair. A tunic with belt or cingulum and, depending on the religious order, a scapular is also worn. Hooded habits are not very common among religious sisters . The habit of the nuns also includes the bowl or the choir coat. 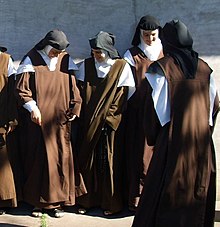 The vestments of the order are determined for the individual communities by the respective order rules, constitutions, statutes or customs. In the various religious communities , the habit is worn every day or only on solemn religious occasions, depending on the rule. The latter is particularly common in the Protestant communities. Many religious costumes originally emerged from the usual clothing of the simple strata of the population or of certain classes, such as widows. After the Second Vatican Council , the habit of the order, which has been consolidated in its form by tradition , was simplified in many monasteries. Again, borrowing from the usual civilian clothing (for women, for example, a simply cut tank skirt and blouse or a long-sleeved dress), attention was paid to uniformity and simplicity in fabric and cut.

Missionaries of Charity in the simple sari characteristic of the order

The practical meaning of the religious garb within the order lies in the fact that the uniform garment emphasizes the community and takes back individuality. The habit is an outward sign of poverty and simple life.

The secondary meaning of “habitus” as “disposition, behavior” is important for the spiritual meaning of the habit (cf. Gal 3:27  EU , Rom 13,14  EU ). For the wearer of this clothing, the habit expresses the inner attitude and at the same time strengthens the feeling of belonging to the religious community and the bond with one's own profession . Outwardly, the role model effect of the religious dress is also important, it has a symbolic character and is at the same time a commitment to faith.

Some orders have decided entirely to wear civilian clothing or have left the decision to their members individually (for example with the English Misses ). In certain professional fields (e.g. in social work or in missions), this can make contact with people easier. In these religious communities, the wearing of simple, unadorned clothing is laid down in the religious rules. The members also often wear a badge as a symbol of their community.

The habit in the Protestant church

In the Evangelical Lutheran Church in the Hanseatic cities of Hamburg and Lübeck there is a special form of robe, a two-part so-called " regalia " consisting of a lower habit and an upper habit. To do this, a ruff is worn instead of the mug .