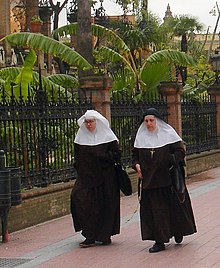 Nuns in Seville. The novice can be recognized by the white veil.

The novitiate (from Latin novicius , 'newcomer') is the time of formation in which someone who has just entered a religious community is in the formation and preparation for the temporal religious vows. Being new to the community admitted to a novice , or novice , called (veraltend is a novice as a feminine use).

This designation probably goes back to the rule of St. Benedict , in which it is discussed in chap. 58, 1 means:

In the novitiate , the novice is examined by the community to determine whether he is called to keep the religious vows (usually the three evangelical counsels poverty , celibacy and obedience ) and whether he has the ability and inclination to live in the order and the specific community. Likewise, the novice is called to examine himself and to get to know the order as well as possible in order to make a decision for or against professing before God , his own conscience and the superiors .

In the fourth book of his book On the Monasteries ' Institutions , which strongly influenced the Western religious system, Johannes Cassianus († 435) reported to his Gallic readership how the Egyptian desert fathers accepted novices:

The other regulations (§§ 11 ff.) Apply to all brothers in common and not specifically to novices.

The novitiate usually begins with the clothing and ends with the first profession. Admission to temporary profession is preceded by the formal vote of all professed or of the council on the novice.

According to the provisions of canon law , the novitiate must last at least one (so-called "canonical") year, and it may not be extended for more than a further year ( can. 648 §3 CIC ). The novitiate is usually, but not necessarily, preceded by a postulate or a candidacy that allows applicants to experience religious life in the community over a period of time that can range from a few months to two years. The CIC specifies the conditions under which a candidate can validly enter the novitiate ( cann. 645-648 CIC ) and which legal obstacles may prevent this. ( can. 642 CIC ).

The novices receive instruction from a novice master or another appointed member of the convent who made the solemn profession a long time ago. For example, teaching in the novitiate includes a fundamental study of the Bible , the Church Fathers, and church and religious history . In particular, teaching in the novitiate deals with the spirituality of religious life and religious vows. The novice should get to know and internalize the rule of the order . Furthermore, the novice receives help for practicing prayer and liturgy , silence, asceticism and the various forms of meditation and possibly language lessons. With the Jesuits , a week-long hike without money can be made compulsory, during which the novices learn to ask for food and shelter.

If the novitiate lasts longer than a year, the first is the canonical year in which the novice usually does not leave the monastery and the greatest possible seclusion is sought. In the second year internships can follow, for example to get to know different professional fields or different conventions within the order.