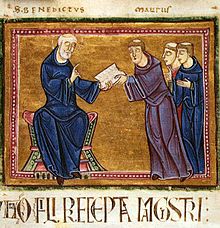 St. Benedict gives his rule to St. Maurus and other monks; French miniature from a manuscript of the Regula Benedicti, Saint-Gilles Abbey , 1129 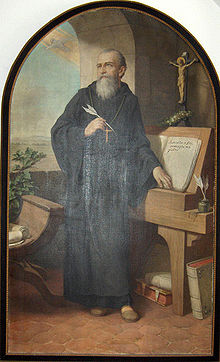 The Benedictine Rule or Benedictine Rule , also Benedictus Rule ( lat. Regula Benedicti [RB]), is a monastery regulation written by Benedict of Nursia , which he established for the community monastery of Monte Cassino in central Italy. Since its composition in the early Middle Ages (around 540) it has been the basis of the Order of the Benedictines (Ordo Sancti Benedicti (OSB)) . 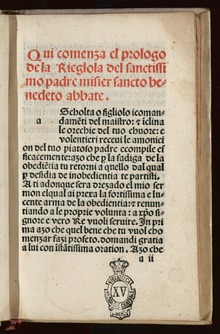 The model was the so-called Magister rule (Regula Magistri), in addition to which influences of the Augustine rule can be recognized. The Rule of Benedict (RB) is intended as a guide for beginners in monastic life and recommends the Rule of St. Basil of Caesarea as a supplement for advanced learners . The RB consists of a prologue and 73 chapters.

The RB was originally intended only as a handout for the residents of Benedict's own monastery on Monte Cassino.After the destruction of Monastery 577, it is no longer traceable for a few decades, but then appeared in Gaul , where in the Council of Autun (around 670 ) it was demanded that the RB should apply in the future. In particular, it was intended to replace the rule of the iro-Scottish monk Columban (the younger) , which was in force in Luxeuil and which was widely spread through the intensive iro-Scottish mission . So the RB spread in Europe, but was initially mixed with other rules, especially that of St. Columban, used.

It was only through the reforms of Benedict von Aniane that the RB, with the support of Louis the Pious, first became the sole authoritative rule of monks in the Franconian Empire and then throughout the West. Emperor Ludwig, son and successor of Charlemagne , made the corresponding resolutions of the Synod of Aachen (816-819) binding by making them binding as capitularies . In this way the standardization of the monastery system could be organized effectively.

As a supplement to the rule, so-called consuetudines (Latin for “habits”), texts that applied to individual monasteries or entire monastery associations, emerged over time. In spite of the uniform order, local peculiarities were also possible.

The Bible reading prescribed in Chapter 48 of the RB can be seen as groundbreaking for the development of medieval monastery libraries . The obligation to read resulted in an implicit obligation on the part of the monasteries to provide books, i.e. for the monks to copy existing texts by hand and to maintain monastery libraries by the monasteries.