Germanic tunic from the Thorsberger Moor , around 4th century AD.

The tunic ( Latin : tunica, -ae f. ) Was a piece of clothing that was worn directly on the body by men and women from Roman antiquity to the Middle Ages . Nowadays it denotes a certain style in women's fashion.

The tunic in ancient times

The tunic originally consisted, like the Greek chiton , of two rectangular pieces of fabric that were only held together on the shoulders with the help of fibulas , and the back of which was slightly longer than the front. The tunic sewn together at the shoulders and sides was more common. It was made of wool and initially without sleeves. Later, short sleeves that did not reach the elbows became common. It was held together above the hips by a belt and reached below the knees in men and down to the ankles in women. Roman citizens wore the toga over their tunic on special occasions , while matrons wore the stole . Otherwise, against the cold or for fashion reasons, several tunics were worn one on top of the other, with the lowest subucula or tunica intima being called. 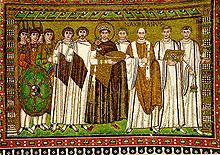 The coloring of military tunics cannot yet be clearly identified in the archaeological findings from fabric remnants. Remnants of paint on sculptures and wall frescoes, however, show white tunics on high officers and standard bearers for the Severan period. This includes the depiction of a sacrificial tribune from Dura-Europos , which refers to the time before 239 AD. The high officer wears a white tunic without purple stripes. An aquilifer and a vexillarius depicted on a sarcophagus in Hungary wear white long-sleeved tunics. The late antiquity Historia Augusta, which is highly dubious in its information, lists a tunica palmata and four tunica russa ducalis as special military awards for Emperor Aurelian (270–275) . This gives an indication that high officers (= dux ) could wear a special red tunic. The Swiss ancient historian Michael Alexander Speidel assumed that soldiers from the high imperial era might have had a special red combat tunic (tunica russa militaris) with them. However, there is no doubt that at this time every soldier and officer had a white tunic (tunica alba) .

A broad purple stripe (clavus) (tunica laticlavia) was woven into the senators' tunic on both sides up to the lower hem ; that of the knights was marked by two narrow purple stripes (tunica angusticlavia) , but they also wore the tunica laticlavia during the imperial era . The triumphators wore purple tunics, on the hem of which palm trees were embroidered in gold (tunica palmata) .

The unicolored, undecorated tunic (tunica recta) was given to the youngsters at the same time as the toga virilis and to the women, when they got married, as a wedding dress from their parents. This wedding dress should according to ancient custom of the bride herself woven be, this practice but was rarely practiced towards the end of the Republic, so that Suetonius it highlights the extraordinary that Augustus stopped his daughter and granddaughters for weaving.

The tunic in the Middle Ages

This garment was not only worn by the Romans in ancient times. It was also popular across Europe from the early Middle Ages to the late Middle Ages ( around the 16th century in this period ). But fashion started to change as early as the 12th century. The tunic was no longer the basic item of clothing for men and women, but was changed and varied through new cuts. In contrast to the Roman Empire, where the tunic was primarily an undergarment , it was worn as an upper garment in the Middle Ages .

The state of the carrier or the wearer was expressed in the type and lavishness of ornaments: While farmers rather simple, shorter tunics wore that non-disabled working in the fields, which the nobles were more lavishly decorated and often with elaborate wide borders of adorned the hems. Often the tunic had a slit at the neckline in the middle, which made it easier to slip on. This could be closed by a primer. Even in the Middle Ages, the tunic was always worn with a belt.

The material used was mostly linen or wool, and silk was also used by wealthy people .

While undyed, gray-blue or gray clothing was prescribed for farmers from the 12th century onwards, the tunics of the nobles and the clergy were often very colorful. From the 13th century onwards, far-reaching rules were imposed on the clergy with regard to jewelry and colors (for example, green and red fabrics were not allowed to be used), which the high clergy in particular often did not adhere to.

The tunic in modern times

In most monastic orders, the actual robe of a religious habit is called a tunic.

Since the late 20th century, tunic has also been used to describe a longer, mostly loosely cut top that is shorter than a mini dress. These tunics are worn with trousers.