The title of this article is ambiguous. Further meanings are listed under Aurelian (disambiguation) . 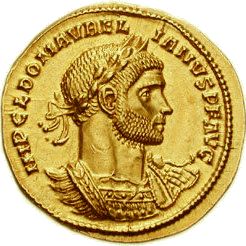 Lucius Domitius Aurelianus (short Aurelian ; born September 9, 214 in Moesia or Sirmium , Pannonia ; † 275 at Caenophrurium , near Byzantium ) was Roman emperor from 270 to 275. He was able to unify the empire in the west as well East restore and began the city walls of Rome named after him.

Aurelian was born in Moesia or Sirmium in the Roman province of Pannonia in 214 , supposedly the son of a landlord. He embarked on a military career early on. Very little is known about his youth, as the stories written in the Historia Augusta presumably only reproduce court gossip and stereotypes. In any case, he was married to Ulpia Severina and had a daughter with her.

In 268 Aurelian commanded the cavalry in northern Italy when Aureolus started an uprising against Emperor Gallienus in Mediolanum (Milan) . Together with the commander-in-chief of the Illyrian legions, Claudius Gothicus , Aurelian put down the revolt quickly, but afterwards they too apparently turned against Gallienus and seem to have been a accomplice in an assassination attempt on the emperor. After his assassination, Claudius first took control of the empire and promoted Aurelian to the command of the cavalry .

When Claudius died of the plague in 270 , his younger brother Quintillus took the throne. Aurelian, who had made himself hopes for the dignity of the emperor, gathered his troops and marched from his current whereabouts on the Danube towards Rome . When Quintillus realized that he didn't have the slightest chance against Aurelian, he allegedly killed himself.

Fight against the Germans

Immediately after assuming power, Aurelian was forced to continue a whole series of conflicts from the reign of Gallienus and Claudius. From about the year 260 the government only controlled Italy, North Africa and the Balkans as well as (temporarily) parts of Spain and western Asia Minor, while both the western and the eastern provinces had effectively made themselves independent. But before Aurelian could address this problem, the core of his dominion had to be secured against attackers. He was able to bring a war to an end relatively quickly with the Goths , which his predecessor had already fought decisively. Greater dangers threatened the warriors of the Juthungen , Marcomanni and Vandals , who constantly tried to cross the Danube and sometimes even reached Italy by plundering . Several such invasions were intercepted and crushed by Aurelian.

The first serious crisis arose when Germanic looters again crossed the Alps and devastated Italy. Aurelian blocked the Alpine passes and hoped to force the attackers to surrender. But he underestimated the opponents who lured his troops into an ambush and wiped them out in the Battle of Placentia (271).

After this defeat, the tense situation in Rome evidently resulted in an uprising by the minters led by Felicissimus , who supposedly wanted to take revenge for Aurelian's constant allegations of corruption. The revolt, the exact background of which is controversial, apparently enjoyed great support from some senators . Aurelian used the military. Finally the uprising was put down; later historians report over 7,000 victims on both sides and that senators were among them.

In the meantime, the situation in northern Italy changed because the attackers split up again into small groups that roamed through Italy, pillaging. The Romans no longer had any problems gradually wiping out these groups. Aurelian thus achieved the victories in the battles of Fano and Pavia .

As a result of the dramatic fighting, Aurelian decided to provide Rome with a powerful protective wall to ward off any barbarian attacks. In 271 work began on the Aurelian Wall , which continued into the reign of the Probus . 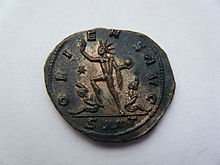 Reverse of the coin of Aurelianus, commemorating the victory over Palmyra ORIENS AVG

The empire disintegrated into three parts in 272 AD with the Gallic (green) and Palmyrenian (yellow) parts.

From the turn of the year 271/272, Aurelian was increasingly confronted with opposing emperors such as Septimius and Urbanus , whose coup attempts, however, never lasted long. The greatest challenge, however, was Zenobia , the ruler of Palmyra , who, together with her son Vaballathus, controlled most of the eastern provinces. Before Aurelian turned to the problems in the east, however, he first had to permanently secure the lower Danube border. In the spring of 272 he defeated the Goths (their king Cannabaudes was also killed) and then decided, despite the victory, to finally evacuate the province of Dacia, which was increasingly infiltrated by barbarian tribes , as its defense was too costly in the long run.

The task now was to restore imperial sovereignty in the east of the empire. The Palmyrian special empire of Zenobia now extended from Egypt to Asia Minor , although it is not entirely clear whether Zenobia only extended to these areas after Aurelian had declared war on her. In any case, against all expectations, Aurelian's campaign was successful. Even during their march through Asia Minor, the imperial army encountered hardly any resistance; Egypt soon surrendered to Aurelian's general Probus, almost without a fight, allegedly without any casualties. The decisive fighting took place at Immae , Emesa and Palmyra, the capital of the Sonderreich, they could all be decided by Aurelian for himself. Even during the siege of Palmyra, Zenobia tried to flee to the Persian Sassanids , but was intercepted at the border by Roman troops. Palmyra surrendered to the winner and was initially spared. But after Aurelian's departure, some uprisings flared up in the recaptured area; this time Aurelian showed no mercy and bloodily put down any kind of resistance. The blooming Palmyra was also sacked and almost completely razed to the ground. His heyday was over.

After his triumphant victory in the east, Aurelian set about regulating the situation in the west and finally reintegrating the special empire there ( Imperium Galliarum ) into the Roman Empire. This led to an incident that was unusual for this warlike time: when the opposing armies met at Châlons-en-Champagne , Tetricus , the reigning Gaulish special emperor, left his troops in the lurch and ran over to Aurelian while the battle was in progress . After a short imprisonment, he was given a high position in the Roman magistrate , and the territory of the Imperium Galliarum was re- incorporated into the Roman Empire in the autumn of 274 .

Now, within four years, Aurelian had reunited the Roman Empire, which was still massively threatened by collapse under Gallienus and Claudius, and to some extent secured it against the constant encroachments of the Germanic tribes. In the following, he now had to look at the domestic political problems, especially the fallow economy.

As a first measure, he introduced two high-quality new types of coins (one of which was also called Aurelianus ), which were intended to revive payment transactions and increase citizens' confidence in the value of money. In the opinion of many ancient historians , the measure, on the contrary, had the effect that inflation really began to gallop because people did not trust the new money. First, however, Aurelian benefited from the money that flowed from the regained provinces into the state treasury. With this financial strength Aurelian could afford to start a violent fight against the ubiquitous corruption . Among other things - see above - he had to put down a revolt of the corrupt Roman minters that Felicissimus started with armed force. In the area of ​​agriculture and trade, so the later tradition, there were also salutary changes to the law.

Aurelian also favored radical changes in religion: in order to promote a religious unity within the empire, he supported the spread of the Sol Invictus cult , whose favorite he was celebrated. According to tradition, Aurelian is said to have had a corresponding vision in the year 272 before the decisive battle against Zenobia. Allegedly, Aurelian therefore commissioned the construction of a large temple for the sun god Sol in Rome two years later. The old Roman gods gradually lost their importance.

On December 25, 274, the Romans celebrated the birthday of the sun god for the first time by imperial decree, which is likely to have laid the foundation for the later Christmas festival . The inscription Sol Dominus Imperii Romani ("Sol, ruler of the Roman Empire") increasingly appeared on coins , whereby Aurelian presented himself as the supreme representative of the sun god on earth.

Eusebius of Caesarea and Laktanz say that Aurelian intended to persecute Christians ; However, there is no evidence. The name of the emperor is closely related to the martyrdom and death of St. Kolumba von Sens , who according to legend he had beheaded.

Death came abruptly and unexpectedly for Aurelian when he was stabbed to death in the midst of planning a campaign against the Sassanids near Caenophrurium in Thrace . The man behind the crime is his private secretary Eros, who allegedly saw no other way out because of the Aurelian fight against corruption. Under Emperor Tacitus Aurelian was deified as a divus .

During his brief reign, Aurelian united the kingdom, which had been divided into three parts since the year 260, and played a key role in repelling the barbaric invaders who threatened Italy itself. His death preceded a full restoration of political stability and the establishment of a long-lived dynasty that would have ended the era of soldier emperors. In modern research, however, as mentioned, his currency reform is rated as fatal, as it has massively exacerbated the economic problems. Regardless of this, Aurelian brought the empire through a very critical phase of its existence and saved the empire from a collapse, triggered by internal and external factors. In particular, Kaiser Probus (r. 276–282) succeeded in further consolidation on this basis. But it was not until Diocletian's reign, which began in 284, that stability was almost completely restored and the imperial crisis of the 3rd century ended.