Probus was born on August 19, 232 in Sirmium as the son of a military tribune . He himself also embarked on a military career, gaining respect from his superiors and troops alike. Even under Aurelian , Probus defended Germania against the Alamanni . When Emperor Tacitus died in 276, he was in command of the troops in the Orient. In the same year he was proclaimed anti-emperor by his troops, whereupon Tacitus' brother and successor Florianus attacked him. Despite being numerically inferior, he evidently defeated Florianus by clever tactics, whereupon Florianus was murdered by his troops. After his death he was also recognized by the Senate , which probably confirmed him as emperor. This was probably the last time an emperor would show the Senate this consideration. Almost all later rulers renounced the nominal recognition by this organ; the Augustan principate was coming to an end.

Probus, one of the Illyrian emperors, was judged unusually positively by the historiography of late antiquity ( Aurelius Victor , Historia Augusta ). From 277 to 282 he held the consulate five times and waged several wars. However, it is unclear how many of the victories attributed to him were actually achieved. In 277, Probus seems to have defeated the Goths in the area of Pannonia , Moesia or Thrace , because according to coin finds he assumed the honorary title Gothicus Maximus . Then he turned to the defense of Gaul , which Teutons had penetrated across the Rhine, since it was defenseless after the end of the Gallic Empire. In the same year he probably had the Franks pushed back behind the river and built fortifications and bridgeheads on the right bank. At the same time he crossed the Neckar himself to drive out the invaded Alemanni and Longioners . He defeated them and took their leader Semnon prisoner, but he gave him freedom. In return, like the Franks, they had to return to their homeland, hand over their booty and hand over the captured Romans. 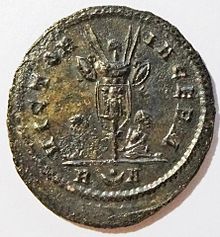 On the Ligys (probably the Lech ) he then defeated the Burgundians , who outnumbered them, by tricking them into a rash advance with a clever tactical approach. He also made an agreement with them. Since they did not want to hand over their prisoners as agreed, he defeated them a second time. 10,000 of the captured prisoners he relocated to Britain to reinforce the army . For his victories he received the title Germanicus Maximus . In 278 he defeated the Vandals in Illyria and Raetia , probably on the Lech, which was also celebrated on a coin ( restitutor Illyrici ).

In 279, Probus turned to the east of the empire and fought rebellious Isaurian tribes in Asia Minor under their leader Lydius . When this fell in battle, they surrendered. Furthermore, in 279 the Nubian Blemmyes in Egypt, who had already taken the cities of Koptus and Ptolemais , were defeated (triumphal procession 281). This secured the important grain deliveries from Egypt to Rome for the time being. When revolts broke out in the west of the empire, Probus bought himself time by concluding an armistice with the Sassanids . Then he put down the Gallic uprising. Finally, in 280/81, the usurpations of Saturninus in Syria , Proculus in Gaul and Bonosus in Cologne ended.

In Rome he had the construction of the Aurelian Wall completed.

Probus was murdered by dissatisfied soldiers in Sirmium in September / October 282. The background was allegedly that the emperor was thinking of dismissing the army after relative peace had returned to the empire. It is unclear whether this completely implausible news has a real core - even a downsizing of the army would have been unwise at the time in question. At most it is conceivable that the pay should be reduced, but this is also speculative. One thing is certain: the emperor lost support in the army despite his military successes. Obviously, the legionnaires were drawn more and more to civilian tasks by him, which were very unpopular with the troops. Eventually the soldiers apparently sided with the usurper Carus ; Probus was slain by mutinous legionnaires during an inspection. 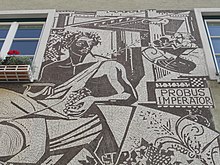 Mosaic on a house in Vienna-Heiligenstadt, a wine-growing region

Despite his short reign and although not much is known about his life, Probus is now one of the Roman emperors known to laypeople in some regions. This comes from a message in the Probus biography of the (very problematic) Historia Augusta , according to which he allowed all inhabitants of Gaul, Hispania and Britain to own vines and make wine.

That is why Probus is considered to be the one who introduced viticulture there in numerous wine-growing regions north of the Alps (for example in Austria and on the Moselle ). It is certain that the Romans introduced viticulture to their northern provinces long before Probus, but there is also much to suggest that wine production in this region gained significantly in importance after the middle of the 3rd century. A connection with the emperor's measures cannot be ruled out.

In Bad Godesberg , a probus column commemorates the emperor.