Sremska Mitrovica ( Serbian - Cyrillic Сремска Митровица ; German outdated Syrmish-Mitrowitz or Mitrowitz, Croatian Srijemska Mitrovica, Hungarian Szávaszentdemeter ) is a Serbian city in the Vojvodina on the north bank of the River Sava , which in the settlement area of the ancient Byzantine city of Sirmium is located.

Today Sremska Mitrovica has about 39,000 inhabitants and is of regional importance due to its paper mill , its port with shipyard and one of the largest prisons in Serbia. 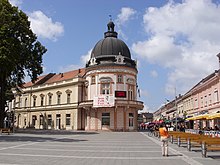 The former Sirmium was called in the Middle Ages in Hungarian "City of St. Demetrius on the Save" (Serbian Dimitrovci, Mitrovica).

Ten Roman emperors were born in and around the city:

The last emperor of the united kingdom, Theodosius I (378-95), was crowned in Sirmium. The Roman usurpers Ingenuus and Regalianus declared themselves emperors in the city (260) and many other Roman regents spent some time in Sirmium, including Marcus Aurelius .

The ancient period ends with the conquest of Sirmium by the Avars in 582 and is also an important turning point in the history of Southeast Europe, as the Slavic conquest took place with the Avars .

In the Middle Ages, the city was fought over between Byzantium and Hungary for a long time . Method of Saloniki had his seat as Archbishop of Pannonia and Great Moravia in Sirmium / Sremska Mitrovica in the 9th century. Around 1180 Sremska Mitrovica finally came under Hungarian rule. The common medieval name of the city was Civitas Sancti Demetrii, the city of St. Demetrius , who still exists in the Hungarian Szávaszentdemeter today. Serbs were first mentioned in writing in the 13th century, and Hungarian Franciscans reported of schismatics and their Serbian patriarch who could be found in the city and in southern Syrmia. From the city of St. Demetrius developed the Serbian name Dimitrovica and ultimately Mitrovica . The prefix Sremska dates back to the 1930s to distinguish the city from Kosovska Mitrovica .

In 1526 the Ottomans conquered the city. During the Ottoman rule the city was called Şeher-Mitrovica and Dimitrofçe . Under the Ottomans, the city had a Muslim majority.

In 1688 Sremska Mitrovica, in German Mitrowitz, was conquered by the Austrian Empire in the course of the Turkish Wars. The city finally came under Austrian rule in 1718 with the Peace of Passarowitz . After the Peace of Belgrade in 1739, Sremska Mitrovica was a border town to the Ottoman Empire, as such was attached to the military border and belonged to the Petrovaradin regiment. From 1848 / 1850–1860 it was part of the Serbian Voivodeship , after which the conditions from before 1848 returned. In 1881 the military border was dissolved and the city and southern Syrmia, which belonged to the Petrovaradin regiment, were annexed to Croatia-Slavonia . On the other hand, Sremska Mitrovica was given the status of a royal free town in order to accommodate the Serbian and German population groups who did not welcome the dissolution of the military border. In 1918, after the end of the First World War and with the break-up of Austria-Hungary , Sremska Mitrovica became part of the newly founded South Slav state, the Kingdom of Serbs, Croats and Slovenes . 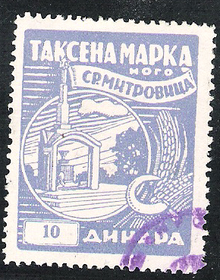 Internment camp for Germans who were not evacuated from Yugoslavia

In August 1945, the then silk factory "Svilara" in Mitrovica was converted into an " internment camp for the concentration of able-bodied Danube Swabians ". On average there were 1,200 prisoners here every day. The number of inmates murdered, starved and died of illnesses here was around 2,000 until the camp was closed on May 5, 1947, of which 1033 have been documented by name. In the immediate vicinity there was also a children's camp with two departments (for infants and for children from three to nine years of age).

During the Croatia war which was located in the town of Sremska Mitrovica prison , where mostly Croat prisoners of war were imprisoned. After the war, war crimes allegations were jointly investigated by Croatian and Serbian public prosecutors .

Demographic development of the city

Lived and worked in the place