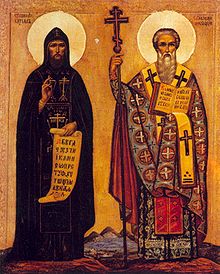 Method (ius) ( medium Greek Μεθόδιος Methodios , Church Slavonic Мефодии Mefodii , South Slavic Методий / Методиј Methodius or Методије Metodije , Czech Methodius , Slovak Metod * to 815 in Thessaloniki , Byzantine Empire , † April 6 885 in Moravia ) was a Byzantine monk, Legal scholar and the first Archbishop of Moravia and Pannonia . He worked with his brother Constantine (Kyrill) as "Apostle of the Slavs". He is venerated in the Eastern Orthodox and Catholic Churches as an apostle-like saint. In the Roman Catholic Church he was declared a Patron of Europe .

In his work, Method stood in the field of tension between his Byzantine Orthodox origins and Roman Catholic ecclesiastical endeavors in East Central Europe. Together with his brother Kyrill he played a decisive role in the inculturation of Christianity among the Slavs .

Method was born in Thessaloniki around 815. It is unclear whether this was also his secular name. His father was a Byzantine Drungarios (naval officer) named Leontios (born in Thessaloniki, probably of Greek origin). His mother was probably of Slavic origin. His brother Constantine (Kyrill) later became his most important companion.

Methodios embarked on a military career and became a strategos in slavery . In 840 he went to Bithynia . In Asia Minor he became a monk. Methodios, like his brother, was highly educated and sensitive. Both taught philosophy at the University of Constantinople , while Method became abbot of a monastery afterwards .

Around 861, Rastislav , the ruler of the Moravian Empire, finally decided to put an end to the East Franconian influence in his country and turned to Pope Nicholas I in Rome with a request for teachers who could re-educate the local priests so that the East Franconian influence could be restored in Moravia is decreasing. Byzantine priests, who had also been active in Moravia for a long time, suggested Rastislav to simply contact the Byzantine emperor Michael III with the same request . - to turn.

In 862 Method was together with his brother Kyrill from Emperor Michael III. and Patriarch Photios sent to Moravia as a missionary, where they proselytized for several years. They introduced the celebration of Holy Mass in Slavonic.

In 867 they left Moravia to travel to Rome . In summer they were in Blatnograd in the Principality of Pannonia with Prince Kocel . There they possibly introduced the Slavic liturgy and trained 50 students.

In Rome they met Pope Nicholas I. Cyril died in 869. Method had promised his brother on his deathbed that he would endure the Slavic mission, although his heart withdrew him into the seclusion and silence of a monastery.

In 869 Kocel sent messengers to Rome with the request to appoint Method as the teacher of his people. Method was appointed papal legate for Pannonia. In a letter to the princes Rastislav, Svatopluk ( Principality of Nitra ) and Kocel, he was commissioned to teach in Moravia and to translate the Holy Scriptures into Slavic.

However, since the Bavarian priests refused to accept the activities of the two Slav apostles, Method was unable to resume the activities of the Moravian Academy. Towards the end of the same year, Kocel sent him back to Rome to have him appointed bishop there so that he had the necessary authority for his task.

At this time Pannonia was divided between the Archbishopric of Salzburg , the Diocese of Passau and the Patriarch of Aquileia , so Pope Hadrian II hesitated . He appointed Method Archbishop of Sirmium , Pannonia and Moravia. The first Slavic archbishopric was established in Moravia.

When Method arrived in Blatnograd, the Bavarian priests left Pannonia in protest. Method was probably in Blatnograd. 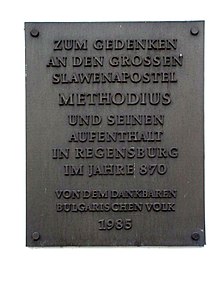 Memorial plaque to the imprisonment of the apostle-like Saint Methodius, Slav apostle and first Archbishop of Moravia and Pannonia , in Regensburg at the old chapel .

Soon after, Method was captured on behalf of Archbishop Aldwin. He was brought to Regensburg , abused and imprisoned (on the island of Reichenau or in Ellwangen ?).

From 870–872, Method wrote many letters to the Pope and to Moravia from imprisonment in the monastery. Only after the Moravian Empire had defeated Eastern Franconia in 872 did Rome dare to help Method: in 872 and 873 the Pope wrote unsuccessful letters to Ludwig the German, Karlmann and to the bishops who had Method 870 mistreated (Archbishop Adalwin , Bishop Ermenrich von Passau etc.), and requested the immediate release of Methods. After the Moravian ruler Svatopluk, who had been one of the supporters of the Bavarian priests, suddenly showed his interest in Method's fate, the Pope decided to act. He commissioned Paul, the Bishop of Ancona , to negotiate with Ludwig the German. The negotiations ended in May 873 with the following result:

The Moravian Academy has resumed its work under the leadership of Method. In 884, Svatopluk agreed with Ludwig the German that the Bavarian priests could continue their work in Moravia parallel to Method.

After 874, the leaders of the Latin clergy in Moravia, John of Venice (also Svatopluk's advisor) and Wiching (a Swabian Benedictine monk) blackened Method near Svatopluk. In 879, the so influenced Svatopluk sent envoy to Rome who slandered Method with the Pope.

Around the same time (879/880) the Moravian Empire tried for the first time to subdivide its territory into dioceses . The only known bishopric of Archbishop Method was in Nitra (Neutra). His bishop was the Swabian monk Wiching, to whose appointment Svatopluk was persuaded by the Latin clergy in his country.

When Method 880 came to Rome to defend himself, Wiching, who was to be ordained bishop, was also in his delegation. In Rome they not only wanted to solve the problems surrounding Method, but also to ask the Pope to recognize the Moravian Empire as a vassal of the Holy See . Method passed the papal exams with no problems and consecrated Wiching. The Pope also sent the letter Industriae tuae to Svatopluk, in which

The Pope also gave Method a collection of ecclesiastical ordinances. In this context, Method is already mentioned as archbishop of (the city) Moravia, probably the capital of the Moravian Empire, which could indicate that Moravia had become an archbishopric independent of Pannonia.

Back in Moravia, Method 881 deposed Wiching as Bishop of Neutra after he had learned that Wiching had written a forged papal letter to Svatopluk, according to which Method should be banished from Moravia. For this purpose, Wiching was entrusted with a mission in the Wislanien ( Vistula region ), which recently joined Moravia . Although he then tried several times to return to Neutra, he was prevented from doing so by Method's students. Shortly before Method's death (885) he went to Rome with Svatopluk's consent, where he again slandered Method.

In 881–882, Method visited his homeland with the consent of the Pope. On the way there he met a Hungarian tribal leader at the Iron Gate . In Constantinople he was warmly received by the emperor and the patriarch, and the emperor kept one of his pupils, a deacon, and a few Slavic books by Method. Method then returned to Moravia with some of the emperor's envoys.

Back in Moravia, Method 883 completed the translation of the Old Testament from the Greek, and shortly before his death also the rest of the Bible. Sometime in the 880s he baptized the Bohemian ruler Bořivoj I in Moravia, which started the Christianization of Bohemia .

In 885, on his deathbed, Methodius chose Gorazd from Slovakia, who would later become saint, as his successor in the Moravian Academy. Method died on April 6th in Moravia. He was solemnly buried "in the wall behind the altar of St. Mary" of the now unknown main church of Moravia. The funeral ceremony was held according to the Slavic, Latin and Greek liturgy. According to ancient traditions, his grave is said to have been in Veligrad .

After the Pope learned of Method's death, he appointed Wiching, who was in Rome and who influenced the Pope, to be Bishop of Neutra (i.e. for the second time) and ecclesiastical administrator of Moravia - but not archbishop. Since Wiching had slandered Method shortly before Method's death in Rome, the Pope sent the letter “Quia te zelo fidei” to Moravia in the winter of 885-886, in which he condemned Method's activities, excommunicated Method and even the use of the Slavic language for Liturgies (except for the sermon and interpretation of the Bible) were forbidden. The Latin liturgy and German priests prevailed again.

At the beginning of 886 papal envoys arrived in Moravia and, among other things, on the instructions of Pope Gorazd, "whom Method was so impudent to appoint as his successor against the orders of all the popes", from teaching at the Moravian Academy until he went to Rome in person comes to explain his actions (which however never happened). During the ambassadors' mission the Moravian Academy was also closed and the liquidation of the followers of Method and Gorazd was initiated by Wiching. 200 people (students, priests and deacons) who refused to switch to the Latin liturgy were sent to prison and then banished from Moravia in the middle of winter. The main followers of Methods were Gorazd, Kliment , Naum , Sava and Angelar . In 886 they went in several groups via Belgrade to Bulgaria , where they founded two academies - the Ohrid School and the Preslav School . From there some of them went to Croatia and Dalmatia, and later to Serbia , Russia , Lesser Poland and Bohemia.

The common feast day of Cyril and Method is February 14th, both in the Catholic as well as the Evangelical and Anglican churches. The evangelical day of remembrance can be found both in the evangelical calendar of names and in the Lutheran Worship. The Lutheran Church - Missouri Synod has set a memorial day for May 11th. Orthodox memorial day is April 6th (Method alone) and May 11th (together with Kyrill).

In the Catholic Church, February 14th is an Obligatory Day of Remembrance in the general Roman calendar . Since Pope John Paul II appointed Cyril and Method as patrons of Europe in 1980 , it is upgraded to a festival in the European regional calendars (e.g. in the regional calendar for the German-speaking area ) .

On July 5th, the day of their arrival in Moravia (863) is celebrated as a national holiday in the Czech Republic and Slovakia .

May 24th is a national holiday in Bulgaria and North Macedonia dedicated to the two brothers.