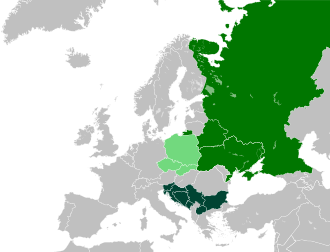 The South Slavic languages are, along with the East and West Slavic languages, one of the three branches of the Slavic languages , which in turn belong to the Indo-European language family . They are spoken by around 34 million speakers in Central and Southeastern Europe.

According to their current sociolinguistic status, Bulgarian, Macedonian, Slovene and Serbo-Croatian are standard languages that are spread over a larger area and are used as the official language in at least one state . Burgenland- Croatian and, to a lesser extent, Banat Bulgarian and Resian are microliterature languages , Molise-Croatian is a spoken variety without a Slavic roof. The same applies to the varieties of East-South Slavic spoken in Greece (listed in the list as Aegean Macedonian and Pomakian), for which there have been and still are approaches to a roof with Bulgarian or Macedonian on the one hand and the formation of independent microliterature languages ​​on the other however, none has generally been implemented.

The South Slavic languages ​​form a dialect continuum from the eastern Alps to the west coast of the Black Sea , which is separated from the language area of ​​the West and East Slavic languages by the distribution area of German , Hungarian and Romanian . This geographical separation goes back to the German colonization in the east of Austria , the conquest of the Hungarians in the Carpathian Basin and the re-establishment of Romanian between the 9th and 11th centuries . Before that there was a coherent all-Slavic dialect continuum.

It is at least doubtful whether those varieties in the southern part of the all-Slavic dialect continuum, to which today's South Slavic languages ​​can be traced back, formed a subunit of Slavic that was distinguished from the rest of the rest of the Slavonic by only their own common linguistic features. Some of the oldest typical South Slavic features can also be found in Central Slovak , while on the other hand, old features can be found in some Slovenian dialects that are otherwise typical of West Slavic. The South Slavic languages ​​were not originally a genetic subgroup of Slavic, but an initially purely geographical sub-zone of the all-Slavic dialect continuum, which from the beginning was traversed by a few isoglosses that continue outside of South Slavic.

According to criteria of historical phonology and morphology, the South Slavic languages ​​can for their part be divided into a western and an eastern group, which are separated from one another by a bundle of isoglosses that runs roughly parallel to the borders between Serbia and Bulgaria and Serbia and North Macedonia , which is also the largest Part of the boundaries of the areas of validity of the respective standard languages ​​are without the isoglosses of the individual characteristics being identical with one another or with the state or standard language boundary lines. The western group thus includes Slovenian (including Resian) and the Central South Slavic slide system (Bosnian, Croatian, Montenegrin, Serbian, Burgenland-Croatian and Molise Slavonic), the eastern group Bulgarian, Macedonian, Banat Bulgarian and the Slavic varieties of northern Greece.

The isoglosses of the typical features of the Balkan language federation , which mainly concern the area of morphosyntax, are somewhat different . In addition to all of today's East-South Slavic, these also include the Torlak dialects of Serbian. Belonging to the Balkan Sprachbund varieties stand out in comparison with other Slavic languages through an extensive loss of declination , and have more grammatical similarities with Romanian , Albanian and partly also the modern Greek , which in the course of linguistic convergence under the conditions prevalent multilingualism have emerged . The spread of the morphosyntactic Balkanisms is more recent than the development of the older phonological isoglosses between East-South Slavic and West-South Slavic. The Old Church Slavonic , the oldest documented proficiency level of Ostsüdslawischen not yet had those characteristics.

Features of the South Slavic languages

The characteristics of the South Slavic languages ​​compared to the East and West Slavic are: