The closest related language to Macedonian is Bulgarian . The Macedonian dialects are part of a dialect continuum that continues into both Bulgarian and Serbian .

Due to the great similarity to Bulgarian, the Macedonian dialects were usually classified as Bulgarian dialects as long as there was no independent written Macedonian language, so that “Bulgarian” was used synonymously with “East-South Slavic”. In Bulgaria this approach is still common today. In the Republic of North Macedonia, on the other hand, all autochthonous Slavic varieties of the historical-geographical region Macedonia are classified as "Macedonian", so that Macedonian is used here synonymously with "South Slavic in the area of ​​the historical-geographical region Macedonia ".

In the context of the Sprachbund theory , which is not based on genealogical linguistic affinities, but on language contact through spatial proximity, Macedonian belongs to the linguistic union of the Balkan languages .

Macedonian is spoken by around 2 million people as their mother tongue . The majority of the speakers consider themselves to be members of the Macedonian people . Around 1.3 million of the speakers live in North Macedonia, where it is the official language .

Smaller groups of speakers live in Bulgaria (1376), Greece and Albania, the exact numbers being controversial due to classification problems and lack of accurate statistics. The small Macedonian-speaking minority living in south-east Albania runs its own schools.

In the north-west of Greek Macedonia there is a minority who speak East-South Slavic varieties, which many Slavists attribute to Macedonian. The Macedonian standard language is not in use there, however, so that it is a matter of "roofless external dialects". In Greece, these varieties are commonly referred to as "Slavo-Macedonian", "Bulgaro-Macedonian" or simply "Slavic" as the word "Macedonian" is usually used there to refer to the Greek region of Macedonia as a whole and its use to denote a non-Greek language is interpreted as an attack on the national identity of the Greek Macedonians . In foreign Slavic studies these varieties are also referred to as Aegean Macedonian , in Bulgarian Slavic studies they are counted as Bulgarian just like the other Macedonian varieties.

As a result of recent emigration, speakers also live in Slovenia , Canada , the USA , Australia , Hungary and Germany .

Until 1944, the Slavic dialects in what is now North Macedonia were classified as Bulgarian in Slavic studies . For example, dramatic works are known before this time that were published in some of these dialects. The political decision to form the Macedonian language was made in 1934 by the Communist International . In the first half of the 1940s, for example, some Macedonian dialects were systematically used for the first time to write non-fiction prose in the journalism of the Communist Party of Yugoslavia (CPJ) and the partisan movement. This marked the beginning of the expansion of Macedonian into the standard language .

On August 2, 1944, a monastery of Sv. Prohor Pćinjski founded the Antifascist Council for the People's Liberation of Macedonia on the initiative of the CPJ. As one of its first acts, the council decided to introduce the "Macedonian language" and proclaimed it to be the " official language " of the Republic of Macedonia (within the Yugoslav Federation) . The council set up three philological commissions to work out a Macedonian written language. The Cyrillic alphabet of Macedonian was largely based on the model of the Cyrillic alphabet of Serbian , which was also codified in 1945. On May 5, 1945, the 3rd Commission announced its final decision on the alphabet and spelling, which was published the next day in the newspaper Nova Makedonija . The Macedonian written language emerged as a demarcation from Bulgarian and so the vocabulary of the Slavic dialects in the area of ​​the Socialist Yugoslav Republic of Macedonia was cleared of Bulgarisms in the period that followed. Nevertheless, it remains most closely related to the Bulgarian one to this day.

In the context of the nation-building of Macedonia by the AVNOJ (Communist Party of Yugoslavia) and the development of national consciousness in the SJR Macedonia, the development of its own codified language played an important role. However, in the course of this development there were conflicts motivated by language policy , above all with Bulgaria (inter alia in connection with the interpretation of the common historical heritage), Serbia and Greece (" name dispute ") and the non-recognition of the Macedonian minority living there .

Today, Macedonian is a fully developed standard language, equipped for expressions in all areas of life . Even if communication with the speakers of Bulgarian is possible without any problems, both idioms are now regarded as independent languages. Since the written Macedonian language is based on the dialects of the region around the cities of Kičevo , Bitola , Struga and Ohrid in western Macedonia, while Bulgarian is mainly based on the dialects of eastern Bulgaria, the difference between Macedonian and Bulgarian in the written language is greater than in the spoken language Language. In fact, a dialect continuum can be determined between the two languages in which only a few isoglosses run near the state border, so that the dialects of eastern Macedonia are more similar to the dialects of western Bulgaria than, for example, the dialects in the region of Ohrid or Skopje and an intrinsic dialect border to Bulgarian can not be drawn.

Overview of the Macedonian dialects 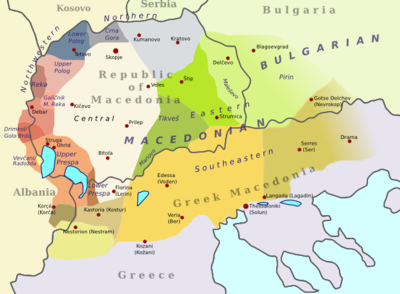 The Slavic varieties of the Greek part of Macedonia can for the most part neither be clearly assigned to Macedonian nor clearly to Bulgarian according to sociolinguistic criteria. The map also shows the state of this area from the beginning of the 20th century, as it is represented in the works of Macedonian and Bulgarian dialectologists, mostly based on older sources and voice recordings with emigrants from Greek Macedonia living in these countries. Due to the socio-political changes of the 20th century (assimilation and forced resettlement), this description cannot simply be transferred to the present.

The dialect of Gorani in southwestern Kosovo is considered (as Bulgarian as well as by some Bulgarian dialectologist) only since recently by some Macedonian dialectologist as Macedonian. In Yugoslav times (and is still at least partly today) it was roofed over by the Serbian variant of Serbo-Croatian and was traditionally part of the Torlak dialect group of Serbo-Croatian .

Examples of grammatical differences in the western and eastern dialect groups

The Macedonian alphabet was developed in 1944/45 by two orthography commissions set up by the Antifascist Council for the People's Liberation of Macedonia . These were mainly based on the Serbian alphabet of Vuk Stefanović Karadžić .

It differs from the Serbian Cyrilliza by the other form of the letters ѓ (Serbian ђ or đ in Latin) and ќ (Serbian ћ or ć) as well as by the additional letter ѕ (which reproduces the sound [dz], which does not exist in Serbian ). The Macedonian alphabet therefore has 31 letters (the Serbian 30).

Previously, Macedonian varieties had been written in the 1930s and first half of the 1940s with individual adaptations of the Serbian or Bulgarian Cyrilliza.

In the Macedonian language, the word accent is usually on the third from last syllable of the word, and in the case of words with three or fewer syllables, consequently on the first syllable.

Macedonian does not distinguish between long and short vowels. An overview:

The consonant inventory of Macedonian at a glance:

Macedonian shares many characteristics with Bulgarian that are atypical for Slavic languages, e.g. B. the complete omission of the genitive , postposed affixes as articles or an object duplication.

In Macedonian, determination is realized, similar to the other Balkan languages, through postposed affixes . It is congruent by number (singular, plural) and also in the singular by gender (masculine, feminine, neuter). The definition also expresses a three-fold graded distance to the speaker (proximal / close to the speaker, unmarked / medial, distal / far from the speaker).

An overview of the determination suffixes:

Determination suffixes are always added to the first term of a noun phrase , even if this is, for example, an adjective or a possessive :

Macedonian nouns also form vocative forms , which are used for direct addressing and calling the addressee .

In the third grammatical person in the singular, Macedonian distinguishes between the genera masculine, feminine and neuter, whereby the first two genera, as in many languages, also refer to the natural gender of persons.

The personal pronouns of Macedonian at a glance:

The unstressed dative forms are also used as possessives .

As in all Balkan languages , the infinitive has been abandoned in Macedonian . Verbs are inflected according to the following categories:

The past tense is restricted to verbs of the imperfective aspect , the aorist to verbs of the perfect aspect. In addition, further tenses ( future tense , perfect and past perfect ) as well as modes ( subjunctive and the rare renarrative, which is atypical for Slavic languages ) are formed analytically.

Here is an overview of the inflected forms of a Macedonian imperfective verb using the example "see, look":

The normal sentence order of Macedonian is subject - verb - object.

In Macedonian there are many loanwords from neighboring languages, such as B. from Serbian, but also historically due to many Turkish loan words, as well as words that are borrowed from Russian and German. There have also been many anglicisms recently.