The Torlakische is a dialect group of Serbian or Serbo-Croatian , mainly in the southeastern part of Serbia is spoken and a transition dialect of Bulgarian and Macedonian form. When classifying this dialect group, there is disagreement among the Slavists as to whether it should be regarded as an independent main dialect of Serbo-Croatian alongside Štokavian , Kajkavian and Čakavian or whether it should be subordinate to the Štokavian as a partial dialect ( prizrensko-timočki govor , Prizren-Timok dialect ) can be. The Torlak language is mostly spoken by Orthodox Serbs , exceptions are the Muslim Gorans in the south of Kosovo and the Catholic Krashovans in the Romanian part of the Banat . In the territory of the Republic of Serbia, Torlak is covered by the standard Serbian language in its Ekavic form. 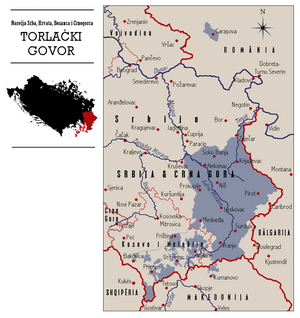 In central Serbia ( uža Srbija ) the valleys of the Southern Morava ( Južna Morava ) and the Nišava with the cities of Niš , Vranje , Leskovac , Prokuplje , Pirot and Aleksinac as well as the area of ​​origin of the Timok River with the city of Knjaževac and the narrow strip between Timok and Bulgarian border to the Torlak language area. Bulgarian is still spoken in the towns of Dimitrovgrad and Bosilegrad , which Bulgaria had to cede to the Kingdom of Serbs, Croats and Slovenes after the First World War .

In the south of Kosovo , Torlak is spoken by the Serbian and Slavic-Muslim population ( Gorans ) in the south of Kosovo. Urban centers here are next to Prizren Uroševac and Gnjilane . In part, the border to the Kosovo-Resava dialect is drawn further north, so that the cities of Đakovica and Pristina are also included in Torlak. Before the massive emigration or expulsion of the Serbian population from Kosovo as a result of “ ethnic cleansing ” with and after the end of the Kosovo war initiated by NATO in 1999, a large number of Torlak-speaking Serbs lived in and around Prizren, in the large municipality of Štrpce , in and south of Pristina and in eastern Kosovo in the outskirts of Gnjilane. At least in the large municipalities of Štrpce and Novo Brdo , where the Serbs made up the absolute majority of the population in the 1991 census, the survival of the Torlak in the province is likely to be assured in the future. The same applies to the Goran settlement areas south of Prizren. The dialect Oravački , an everyday language in Orahovac , is also spoken by the Albanian majority population there, many as their first language.

In the Romanian part of the Banat , the Roman Catholic Kraschowans (Kraševani) in the villages of Caraşova ( Croat . And Serb. Karaševo ) and Lupac ( Croat . And Serb. Lupak ) form an island of the Torlak dialect. Of these, only a small part identify with Croatian or Serbianism , most of them simply refer to themselves as Kraschowans and are also recognized in Romania as a separate ethnic group alongside the Serbs and Croats.

In the 19th century , the Torlak language area was one of the areas that remained with the Ottoman Empire the longest . It was not until 1878 that the Sanjak Niš with the towns of Niš , Pirot , Prokuplje and Leskovac , i.e. the north-eastern part of the Torlak-speaking area, became part of the now completely independent Principality of Serbia . The south-western part with the cities of Prizren , Uroševac , Gnjilane and Vranje was only attached to Serbia in 1913 after the Balkan Wars. The Torlak dialect played no role in the development of the standard Serbian language.

In the 19th and early 20th centuries, the national affiliation of the speakers of Torlak was disputed for a long time between Serbs and Bulgarians , also due to the lack of a clear language border on dialectal level . Ethnographic maps from the 19th century sometimes show the whole of south-east Serbia, including the city of Niš, as part of the Bulgarian-populated area.

The controversial demarcation makes the Torlak-speaking area and Vardar-Macedonia a bone of contention between Serbia and Bulgaria . As early as the Peace of San Stefano in 1878, Bulgaria claimed Macedonia as well as the area around Pirot and the southern part of the Southern Morava valley . Later Bulgaria tried several times, unsuccessfully, to win over parts of the Torlak area from Serbia in addition to Vardar Macedonia. During the First World War, Bulgarian troops were in Serbia from 1915 to 1918. In 1941, Bulgaria invaded Germany's side in what was then the Kingdom of Yugoslavia , which was subsequently redistributed by the Axis powers . The areas around Pirot and Vranje as well as the southern edge of today's Kosovo and most of Macedonia were awarded to Bulgaria by the Axis powers. With the victory of the Allies , Bulgaria lost all these areas again to the new Yugoslavia .

The Torlak area in the south of Kosovo was also affected by the massive emigration or displacement of the Serb population as a result of the "ethnic cleansing" since the end of the Kosovo war in 1999.