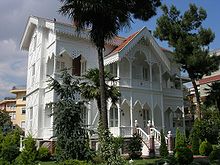 The Peace of San Stefano was signed in this house in 1878.

The peace of San Stefano (also preliminary peace of San Stefano , today Yeşilköy in the west of Istanbul on the Marmara Sea ) ended on February 19th jul. / March 3,  1878 greg. the Russo-Turkish War 1877–1878 . In the course of the war Bulgaria gained independence . For this reason, March 3rd is a national holiday in Bulgaria .

In order to prevent Russia's Pan-Slavic ambitions , the then British Prime Minister Lord Disraeli convened the Conference of Constantinople in 1876 , which dealt with the future of the Balkan peoples. The European politicians proposed a series of reforms in the Ottoman Empire. With regard to Bulgaria, the possibility of autonomy and the limits of one or more future autonomous Bulgarian provinces within the Ottoman Empire were discussed. However, Sultan Abdülhamid II refused to accept the proposals as a whole.

Russia unofficially supported the "Slavic Brother Peoples" under the sign of Pan-Slavism; in order to be able to intervene directly, however, it had to come to an agreement with the German Empire and Austria-Hungary .

Bismarck avoided taking sides, that Russia agreed with Austria-Hungary on 15 January 1877 Treaty of Budapest : Russia pledged to not create a large Slavic state in the Balkans, Austria should have the right to occupy Bosnia and Herzegovina get and behave neutrally for it.

In the following Russo-Turkish war, Russia conquered practically the entire European part of the Ottoman Empire, only Constantinople was not captured out of consideration for the other European powers. Since Great Britain and France saw their interests impaired in this enormous increase in Russian power, they sent their Mediterranean fleets to the straits to show their presence. Russia then endeavored to quickly create a clear situation in the Peace of San Stefano, and the Ottoman Empire had to accept the maximum Russian demands.

The treaty was signed for the Russian Empire by Nikolai Ignatiev , the former Russian ambassador to Constantinople, and Alexander Nelidov , head of the diplomatic department of the Russian Balkan Army. Mehmed Esad Safvet Paşa , Secretary of the Sultan and Sadullah Paşa signed for the Ottoman Empire .

The peace of San Stefano determined the immediate independence of Serbia, Montenegro and Romania . Bulgaria was to be extended around Eastern Rumelia and Macedonia to the Aegean Sea , to be under Russian occupation for two years and then to become an autonomous principality , but tributary to the Ottoman Empire . Russia was to receive parts of Bessarabia (for which Romania was to be compensated with the Dobruja ) in Europe and parts of Armenia and the Ottoman provinces of Kars , Batum and Ardahan in Asia Minor .

Extract from the preliminary peace of San Stefano

The preliminary peace of San Stefano was signed in French.

Article 6. "Bulgaria, with Eastern Rumelia and Macedonia extended to the Aegean Sea, is to remain occupied by the Russians for 2 years as an autonomous principality with tribute to Turkey"

Article 7. “Bulgaria is an electoral principality, no member of a ruling dynasty of the major European powers can become“ Prince of Bulgaria ”. Confirmation of the Porte and the approval of the Powers are required for the election. "

Article 12. “The Danube fortresses are to be razed; no warships, only river police ships are allowed on the Danube "

Article 19. “War compensation of 1,400 million rubles is to be paid by Turkey to Russia; they can be compensated for by assignments of territory ( Sanjak of Toultscha , Ardahan , Kars , Batumi , Bayazet ) (= 1100 million rubles). "

Article 22. “Protection of the Russian monks in Turkey and on Mount Athos. The official property right is the kaiserl. Embassy and the Russian consulates in Turkey. "

Article 24. "The Bosphorus and the Dardanelles remain open to the trading ships of neutral states, in times of war as well as in times of peace."

Revision by the Berlin Congress

The European powers did not want to accept this dictated peace. With the creation of the Greater Bulgarian Principality, Russia had broken the Treaty of Budapest with Austria-Hungary, which therefore called for a revision of the Treaty of San Stefano. Great Britain also absolutely wanted to prevent Russia - as stipulated in San Stefano - from gaining access to the Mediterranean via the satellite state Bulgaria and promised the Ottoman Empire in the convention on the defense alliance between Great Britain and Turkey in Istanbul of June 4, 1878, against the assignment of Cyprus assistance.

The impending danger of war was averted by convening the Berlin Congress , which almost completely revised the peace of San Stefano at the expense of Russia and Bulgaria.