Abdülhamid II (also Abdulhamid and Abdul Hamid , Ottoman عبد الحميد İA ʿAbdü'l-Ḥamīd ; * September 21, 1842 in Istanbul ; † February 10, 1918 ibid) was Sultan of the Ottoman Empire from August 31, 1876 to April 27, 1909 . He was the second son of Sultan Abdülmecid I and succeeded his brother Murad V after his deposition to the throne. 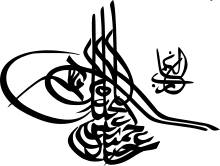 Abdülhamid accompanied his uncle, Sultan Abdülaziz , on his trip to Austria, England and France in 1867 . He was believed to be a believer in liberal principles, and the more conservative of his subjects regarded him with suspicion for years after his accession to the throne.

Abdulhamid was followed in 1876 by his brother Murad V, who after only three months' rule for government incompetence had been deposed. Delay in public spending and an empty treasury, the uprisings in Bosnia and Herzegovina , the war with Serbia and Montenegro and the Bulgarian uprisings in April 1876 , which were bloodily suppressed, weighed on the Ottoman Empire.

In 1876 an international conference was convened in Istanbul , which among other things discussed the future of the Balkans. To demonstrate his readiness for reform, Abdülhamid II supported the liberal reform movement and on December 23, 1876, proclaimed a constitution drawn up in particular by Midhat Pasha , which would have introduced a parliamentary system. However, the new ruler quickly turned away from this domestic political course and suspended the constitution. Like his predecessors, he ruled increasingly authoritarian past his ministers, suppressed the Young Turkish movement and also built an effective censorship and espionage system.

The devastating war with Russia followed in early 1877 . The harsh conditions initially imposed on Abdülhamid by the Peace of San Stefano were moderated to some extent in the Berlin Congress in 1878 , mainly on the initiative of British diplomacy. From the congress, Abdülhamid II leaned closely to the German Empire. German experts should reorganize the state finances and the Ottoman army . Another national bankruptcy forced him to agree to a foreign control over the national debt , and in December 1881 to pass on by decree many of the state revenues for the benefit of the creditors to the Dette Publique .

In 1882, the formerly Ottoman Egypt was occupied by Great Britain (see British rule in Egypt ). The unification of Bulgaria with Eastern Rumelia in 1885 - contrary to the provisions of the Berlin Congress  - was another low blow, as was the occupation of Tunisia by France in 1888 . From this point on, however, Abdülhamid was able to avoid further territorial losses for the time being, so that in the following years he concentrated on stabilizing his authoritarian rule within.

In this way, Abdülhamid succeeded in lowering his ministers to the rank of secretaries and in concentrating the entire state administration in his hands in the Yıldız Palace . But this did not diminish the internal disagreement: Crete was constantly in turmoil, the Greeks were dissatisfied, and from around 1890 the Armenians began increasingly to demand the reforms that had been granted to them in Berlin.

The sultan tried to strengthen the grip of state power in the eastern provinces. For this purpose he set up the Hamidiye regiments, whose members were recruited from Kurdish riders from individual tribes.

Contemporary satirical depiction of the Sultan as the "Great Butcher"
→ Main article : Massacre of the Armenians 1894–1896

There were minor incidents in Merzifon and Tokat in 1892/93 . In 1894, a serious revolt in the mountainous region of Sasun (in the Vilâyet Bitlis ), triggered by high tax demands, was ruthlessly suppressed. The European states demanded reforms again. Great Britain and the Armenians originally wanted to demand further reforms, but this failed because of Russian opposition. Russia rejected any scheme that could have led to full Armenian independence or would have required war with the Ottoman Empire to accept the plan. The Sultan had noticed the disagreement between the powers and rejected many of the reform clauses. Instead of implementing the reforms promised to the outside world, a series of massacres began in autumn 1895, primarily of the Armenians, which dragged on for many months throughout Asia Minor and in the capital. In some cases, Armenian activists provided the pretext; the background, however, was to resolve the “Armenian question” by decimating and intimidating those affected. At the latest these massacres, which parts of the public ascribed to the Sultan, brought him the worst possible reputation in the European public: He became the “red (bloody) Sultan”, a symbol of deviousness and cruelty. British Prime Minister Gladstone called him the "big killers" ( Grand Assassin ) and the "nasty Turks" ( the unspeakable Turk ). The pogroms of 1894–1896, which killed up to 300,000 Armenians, were also known as the Hamidic massacres . Hamidiye regiments played an important role in the massacres.

Despite all the discrediting of the Sultan in the European public, it was not possible to provide evidence that the Sultan had given the orders for massacres of the civilian population. That the massacres were organized in some way can be seen from the fact that similar procedural patterns existed in the places where the massacres took place. So almost all male Gregorian Armenians were killed, women and children as well as other Christians and Catholic Armenians were not touched, as the reports of the British diplomat Charles Eliot and the American missionary Edwin Bliss show. Other statements by contemporary and eyewitnesses speak against an order from the sultan. Charles Eliot, Hepworth and the German ambassador stated that the Sultan did not organize the massacres. All he had given was the order to suppress insurrections by Armenian rebels with the utmost severity or to prevent those in preparation. The local authorities irritated the sultan and in some cases even invented planned attacks in order to collect their medals. Another argument against a central order is that there were local officials in other places who intervened to prevent the impending massacre of Armenians, including the governor of Ankara and the commandant in Aleppo, Lieutenant General Edhem Pascha.

The promised reforms for the non-Turkish minorities were still only on paper. Crete alone benefited from extended privileges. Nevertheless, a riot broke out there. In early 1897, Greece sent an expeditionary army to support the insurgents. In the Turkish-Greek War that followed , the Ottoman Empire achieved an easy victory, but the great powers protected Greece and only allowed Istanbul a small border correction. A few months later, Crete was even taken over by four major powers and thus effectively withdrawn from the rule of the sultan; instead there was an autonomous government under a prince of Greece until 1909.

Reception of the German ambassador on the occasion of the completion of the first section of the Baghdad Railway on June 21, 1904

The sultan's further policy was contradictory: the following year he received the German Kaiser and the Empress in a festive ceremony in Istanbul - a symbol of the intensification of German-Ottoman relations. In 1899 the Sultan approved the construction of the strategically important Baghdad Railway for the German Empire . In 1901, as part of the military reforms, several high military officials came to serve as advisers to the Sultan, such as Heinrich Karl Abraham Imhoff for the artillery, Karl Auler for the pioneers, von Rüdgisch for the cavalry, and Bodo Borries von Ditfurth for the infantry. At the same time, however, the sultan promoted pan-Islamic propaganda, which made the situation of the Christian population in the empire less secure and ran counter to the policy of equality that had been introduced since the middle of the 19th century. The privileges of foreigners within the Ottoman Empire were curtailed; the new railway line to the holy places was swiftly continued and emissaries were sent to distant countries (especially in colonies of hostile European great powers) to preach Islam and the supremacy of the sultan caliph.

This appeal to the Muslim community spirit was largely useless against discontent due to the ongoing mismanagement. There was constant riot in Mesopotamia and Yemen; in the army and in the Muslim population, the semblance of loyalty was maintained mainly through a system of espionage and denunciation and massive arrests. Meanwhile, the sultan, for fear of an assassination attempt, withdrew almost completely to his Yıldız palace, and public appearances were kept to a minimum. In 1905 he survived an attack by Armenian terrorists . On July 21, 1905, the revolutionaries had put the Daschnak dynamite in his car while the Sultan was holding his Friday prayers in the Hamidiye Mosque . A delay of a few minutes saved the sultan's life; 26 members of his retinue died and 58 were injured. 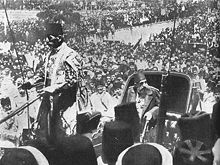 One of the last known recordings of Sultan Abdülhamid from 1908, during the cuma selamlığı Friday procession

Since 1903 the Rumelian provinces on the soil of ancient Macedonia , the internal unrest of which the Sultan's government could no longer control, were in fact placed under international supervision. This national humiliation, reinforced by the pent-up resentment of numerous officers against the palace spies and informants, as well as the spread of liberal ideas, especially in the army, finally led to a crisis of the sultan's absolutist rule (for a detailed discussion see Young Turks ). When Abdülhamid heard of the revolt of the Saloniki troops led by Young Turkish officers and of their march on Istanbul (July 23, 1908), he had to surrender immediately.

On the 24th he put the constitution of 1876 back into force, as demanded by the rebelling Young Turks; the next day espionage and censorship were abolished and the release of political prisoners ordered. On December 10th, Abdülhamid opened the newly elected parliament with a speech from the throne, in which he said that the first parliament (by him) had only been temporarily dissolved until the education of the people was brought to a sufficiently high level by expanding teaching would have been.

But on April 13, 1909, Abdülhamid II supported an uprising by conservative soldiers and the religiously incited population of the capital, who tried to overthrow the Young Turkish government (" Incident of March 31 "). The attempted coup was put down by the Salonika troops after three days. After that, the " Committee for Unity and Progress " under Enver , Cemal , Talaat and Gökalp decided to depose Abdülhamid, and on April 27, his younger brother and heir to the throne Reshid Effendi was proclaimed the new Sultan Mehmed V.

Villa Allatini in Saloniki, exile of the Sultan 1909–1912 before his evacuation to the Beylerbeyi Palace 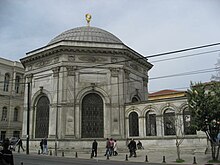 The ex-sultan was taken captive to Salonika , from where he had to be transferred  to the Beylerbeyi Palace in Istanbul in the autumn of 1912 - as a result of the advance of enemy Bulgarian troops in the First Balkan War . Both times the German station ship SMS Loreley took over the transport of Abdülhamid.

The tomb of Sultan Abdülhamid II in Istanbul

He died on February 10, 1918 in Istanbul; He did not live to see the defeat of the Ottoman Empire in the First World War , the collapse of his empire and the overthrow of his dynasty in 1922/1924.