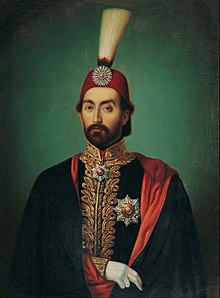 Abdülmecid was the son of Mahmud II and his second wife Bezm-i Alem , who came from Georgia .

When he succeeded his father on July 1, 1839, the Ottoman Empire was at the height of a military-political crisis. The Ottoman army had been defeated at Nizip by the Egyptian army of Viceroy Muhammad Ali Pasha , and the Turkish fleet was on its way to Alexandria to be handed over to the Egyptians by its renegade commander Akhmed Fevsi Pasha. This so-called Oriental crisis could only be averted and the existence of the empire secured by Abdülmecid entering into negotiations with the European powers, which then led to the London Four Power Alliance of July 15, 1840.

In accordance with the express instructions of his father, Abdülmecid immediately set about implementing the reforms to which Mahmud had devoted himself. In November 1839 an edict was proclaimed that became known as hatt-i Şerif von Gülhane and introduced the Tanzimat reforms . After the end of the Crimean War , a similar statute, the hatt-ı hümayun, was added in February 1856 . These ordinances ensured that all groups of the Sultan's subjects enjoyed the security of their lives and property; that taxes were fair and that justice was impartial; and that everyone had full religious freedom and equal civil rights. The plan aroused stiff opposition from the Muslim ruling classes and ulama (privileged religious teachers) and was only partially implemented, particularly in distant parts of the empire. More than one conspiracy against the sultan's life arose as a result.

Of the other reform measures pushed forward by Abdülmecid, the most important were: the reorganization of the army (1843–1844), the establishment of a Ministry of Education, the abolition of the poll tax , the suppression of the slave trade and various provisions for a more efficient administration of the public service and for the promotion of the Trade.

From 1843 the Sultan initiated the construction of the Dolmabahçe Palace as a residence.

At his behest, Hagia Sophia was first restored by the Fossati brothers from 1847 to 1849 .

For the public history of its time, the unrest and uprisings in the various parts of his dominion and the war against Russia (1853-1856) waged by Great Britain, France and Sardinia in the interests of the Ottomans, see Ottoman Empire and Crimean War .

After Kossuth and others sought refuge in the Ottoman Empire after the failure of the Hungarian uprising in 1849, the Sultan confidently and resolutely rejected extradition demands from Austria and Russia. He also worked to ensure that the conspirators who sought to murder him were not punished with death. He had the character of a kind and honorable man, if weak and easily influenced. On the other hand, he was also prone to excessive waste, especially towards the end of his life. In 1851 he founded the Medjidie Order for services to the empire.

In 1856 he founded the city of Medgidia . When he died of tuberculosis in 1861, he was succeeded by his brother Abdülaziz as the oldest member of the Ottoman dynasty. He left several sons, four of whom, Murad V , Abdülhamid II , Mehmed V and Mehmed VI. eventually also became sultan.