The title of this article is ambiguous. Further meanings are listed under Sultan (disambiguation) . 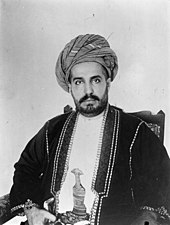 Sultan ( Arabic سلطان Sulṭān  ' rule ', ' ruler ') is an Islamic title of ruler (also a personal name), which has been used from the 10th century in various epochs and regions of the world, for example in India and the Ottoman Empire . A sultan's territory is called a sultanate .

The title encompasses both moral weight and religious authority and is based on the role of the ruler as defined in the Koran . However, the sultan was not a religious teacher.

The first Islamic monarch to bear this title was the Ghaznavid ruler Mahmud of Ghazni (998-1030). Later, sultan became the common title of the Seljuk , Ayyubid , Mamluk , Ottoman and other rulers in the Muslim world.

In Turkey , the Sultanate of the Ottomans, which had claimed imperial rank there since the 15th century (conquest of Constantinople ) , was abolished in 1922. In the same year the Sultan of Egypt changed his title to king (Arabicملك malik ), as well as the Sultan of Morocco in 1956 . For a short time, Zanzibar (1963/1964) and the Maldives (1965–1968) were sultanates after their independence. Today, Oman and Brunei are the only sovereign states whose heads still bear the title of sultan .

In East Africa , the title was also used for village chiefs in the past. In some African states (e.g. Nigeria ) there are still semi-autonomous sultanates, as well as in the Southeast Asian Kingdom of Malaysia and in Mindanao . In Indonesia , the Sultanate of Yogyakarta exists as a partially autonomous region.

Similar to other ruler's names, the term sultan is mostly used nowadays in a different context, namely in tourism . This is probably due to the fact that the tour operators want to claim an association with the once magnificent sultan's palaces. Many hotels and tour operators, especially in the geographical area of ​​the former Ottoman Empire, still use the term Sultan today .

Sultan (Arabic for “strength”) denotes the state authority in political language and later the Islamic holder of government power. For the first time the Seljuks Toghril-Beg was awarded the title "Sultan" by a caliph in 1055 . From 1517 to 1924, the Turkish Ottoman sultans were the successors of the Abbasids and were also caliphs. Since then there have been no more caliphs. The feminine form "Sultana" was rare; only some of the main wives of the caliphs of Cordoba were given this name, sometimes only as widows.

The Serbian Janissary Konstantin from Ostrovitza writes in his memoirs of a Janissary in Chapter 48:

“The sultan's name in Turkish is as follows: the first büyük beg, which means great lord; the second Hûnkâr, that is, Turkish prince; the third Mirza, that is, power; the fourth sultan, that means emperor; after his ancestors he is called Osmanoğlı, which means son of the Ottomans. The others call him Pâdişah, that means name of names. "