Flag of the Ayyubids

Coin minted in the name of Ayyubid al-Adil

With the fall of the Fatimids in Egypt , increased attacks by the Crusaders of the Kingdom of Jerusalem began . Against this, the Fatimids called the Zengids , who ruled Syria , for help . They sent troops to Egypt under Shirkuh , who was appointed vizier . After his death, his nephew Saladin became a vizier in 1169. In 1171 he eliminated the dynasty of the Ismaili Fatimid caliphs and established the Kurdish dynasty of the Ayyubids.

Under Saladin (1171–1193) Egypt was reorganized and the economy further strengthened by promoting agriculture and trade in order to be able to drive the Crusaders out of Jerusalem and Palestine . By 1181, rule over Syria, Upper Mesopotamia , Yemen and Nubia was extended, so that Saladin ruled most of the Arab core countries. After consolidating his rule, he decisively defeated the Crusaders on July 4, 1187 in the Battle of Hattin near Tiberias and conquered Jerusalem. In the Third Crusade that followed, the crusaders were able to recapture some coastal cities (including Acre ), but initially they did not succeed in recapturing Jerusalem.

Since Saladin had divided the empire before his death, there were initially power struggles among his successors, in which al-Adil I (1200-1218) fought against al-Mansur (1198-1200), al-Aziz's underage son ( 1193–1198), was able to prevail. Although al-Adil also divided the empire before his death, his successor al-Kamil (1218-1238) was able to fend off the Damiette (1217-1221) crusade in Egypt and the crusade of Frederick II (1228-1229) through negotiations end to the emperor , in which the unfortified Jerusalem was ceded. Shortly before his death, al-Kamil was also able to prevail in Syria.

After the outbreak of dynastic power struggles, as-Salih (1240–1249) succeeded in reuniting large parts of the Ayyubid Empire, even if Northern Syria, Upper Mesopotamia and Yemen were finally lost. He was also able to finally conquer Jerusalem from the Crusaders in 1244.

Immediately after fending off the Sixth Crusade (1249-1254), which had targeted Egypt, the last Ayyubide Turan Shah fell victim to a conspiracy of the Turkish Mamluks in the army when he wanted to limit their influence. Until 1257 his stepmother Shajar ad-Dur led the government as regent, where she married the Mamlukenführer Aybak . This rose as al-Malik al-Muizz to sultan in 1252, ended the Ayyubid dynasty in Egypt and founded the Mamluk Empire (1252-1517).

Side lines of the Ayyubids ruled in Damascus and Aleppo until 1260, in Homs until 1262 and in Hama until 1341. There were also Ayyubid rulers in Hasankeyf (Hisn Keyfa) who stayed there until the 15th century and only from the Aq Qoyunlu were eliminated.

In contrast to the Fatimids and the following Mamluks, the Ayyubids did not rule a central state. Rather, the ruler's sons and other side branches of the dynasty were involved in the administration of the empire. However, after the death of a ruler, this repeatedly led to battles for the unity of the entire empire. 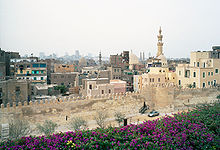 The architecture of the Ayyubid period is shaped by old regional artistic traditions, mixed with stylistic elements of Iranian origin and the extensive experiences borrowed from the Crusader architecture.

The last-mentioned component is impressively reflected in the architecture serving military purposes, such as the most outstanding work, the citadel of Aleppo . The special architecture is expressed by a large, bare and sharp-edged structure - set back into the slope - through which a mighty archway provides access to the citadel. This monument is connected to the main entrance via a bridge, a porch with stairs.

The establishment of numerous religious foundations, such as madrasas , distributed in cities such as Aleppo, Damascus and the Egyptian Cairo , which was driven by the orthodox religious attitude of Saladin, is also significant . Examples are the al-Zahiriyya -, the Firdaus - and the al-Salihiyya -Medeses.

For emirs in al-Jazira see: Ortoqiden

Persons officiating as Sultans of Egypt are highlighted in bold .

Sultans of the Ayyubids