Islamic school is a forwarding to this article. See also: Madhhab for Islamic Law School . 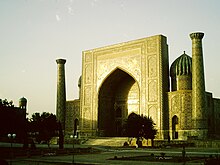 The Sherdor madrasah in Samarkand

Medrese or madrasa ( Arabic مدرسة 'Place of study', plural Madāris ; Turkish medrese ), also called madrasah in German , has been the name of a school in which Islamic studies are taught since the 10th century .

The core disciplines of the madrasa include Fiqh , Usūl al-fiqh and Hadith , Arabic linguistics ( Classical Arabic ) and Koran studies . In addition, natural sciences as well as logic and mathematics were taught - especially in the early and influential Madāris (or madrasas) called Nizāmīya in Baghdad , Nishapur , Isfahan and Basra - the famous polymaths Omar Chayyām , Ibn al-Haytham and Ibn Sīnā come from these influential Seljuk madrasas. The madrasa is usually funded by a pious foundation . It is up to the founder to determine the teaching program as well as the number of students, teachers and other employees. The size of such madrasas varies considerably: while some consist of a single classroom, others comprise a whole complex of buildings with special rooms for teaching, the library, the accommodation of students and teachers, as well as for worship.

People who have completed a madrasa training often receive certain honorary titles such as mullah (in Iran) or mawlawī (in South Asia ). Graduates of a Shiite madrasa are dubbed hudjat al-Islam .

In addition to its specific terminological meaning, the term madrasa is also used in general in today's Arabic as a term for any type of school.

The term madrasa is derived from the Arabic verbدَرَسَ / darasa  / 'learn, study' and originally referred to the place where the study of Islamic legal doctrine (Fiqh) took place. Initially, mosques , especially Friday mosques , were the most important places for imparting knowledge in this discipline. In the 10th century, specialized learning locations for Islamic law were created for the first time in Khorasan in Central Asia with the establishment of the first madrasas. One of the oldest preserved madrasas in Central Asia is Chodscha Mahschad (11th / 12th century) in what is now southwestern Tajikistan.

The introduction of the madrasa in Iraq took place in the second half of the 11th century, when two officers of the Seljuk Empire, the vizier Nizam al-Mulk (1018-1092) and the finance minister ( mustaufī ) Sharaf al-Mulk two madrasas in Baghdad founded . Nizam al-Mulk was not satisfied with the establishment of his madrasa in Baghdad, but founded such schools in several other cities such as Nishapur , Mosul and Balkh . With these schools, known as Nizāmīya , the state-sponsored madrasa reached its first climax. In the early 12th century, Sunnis who had come to influential positions in the Fatimid Empire established the first madrasas in Egypt. Saladin became the main sponsor of the madrasa in the second half of the century . He founded madrasas not only in Cairo , but also in the newly conquered areas of Syria, Palestine and the Hejaz . The early madrasas were all geared towards either the Shafiite or Hanafi madhhab . In traditionalist circles, especially among the Hanbalites , there were still religious reservations about the new institution for a long time. In 1234, the Abbasid caliph al-Mustansir founded with his al-Madrasa al-Mustansiriyya for the first time a madrasa that included all four Sunni madhhabs. Such four-madhhab madrasas were later also erected in other places, for example in Cairo and Mecca.

In the 13th century, the madrasa was introduced into the Maghreb by the Hafsids (1229–1574) and Merinids . The first madrasa in what is now Tunisia was the Madrasat al-Maʿrad in Tunis, founded in 1258 . The Madrasat as-Saffārīn , built in 1285 by Abu Yusuf Yaqub , was the first educational institution of its kind in Morocco .

In India, the first madrasas were also founded in the 13th century. Around the middle of the 18th century, madrasa training was standardized here with the Dars-i Nizāmī , a teaching curriculum developed by the scholars of Farangi Mahall . They included not only tradition Sciences ( manqūlāt ) also rational sciences ( ma'qūlāt ). The former included Arabic grammar and syntax ( ṣarf wa-naḥw ), rhetoric ( balāġa ), legal theory ( Usūl al-fiqh ), hadith science and Koran exegesis , the latter logic ( manṭiq ), wisdom ( ḥikma ), theology ( Kalām ) and Mathematics ( riyāḍīyāt ). During the British colonial period there were discussions among Muslim scholars about how far modern Western science should be integrated into madrasa training. While there was a great deal of openness in Farangi Mahall itself, the scholars of Dar ul-Ulum Deoband, newly founded in 1866, were considerably more reserved. In particular, Rashid Ahmad Gangohi , one of the school's co-founders, rejected modern Western science. There were no reservations about the use of modern printing technology to distribute their own books.

The Mohimaganj Madrasa, built near Rangpur in Bangladesh in 1939

In Mali, the madrasa is still a relatively new phenomenon. The first two institutions were established in Kayes and Ségou in 1946 . Although both the French colonial power and later the regime of Modibo Keïta were hostile to the madrasas, these were very popular. In 1983 a total of 60,000 students attended such an institution. In 1985, the madrasas were recognized by the government as educational institutions. In the decree that placed the madrasas under the Ministry of Education at the same time, the "Malian Organization for Unity and Progress" ( Association malienne pour l'unité et le progrès de l'islam - AMUPI) was the representative of the madrasas in negotiations with the state authorities certainly. In 1986 the Ministry of Education passed a new teaching program for the madrasas without consulting the madrasa leaders, which provided for new standardized examinations for the "basic teaching diploma" ( Diplôme d'enseignement fondamental - DEF). For the teaching year 1987/88 these examinations became compulsory for the first time. Students who refused to take the exams were excluded from scholarships for study abroad from 1988 onwards. The madrasa leaders protested against state tutelage and in September 1988 submitted their own draft of the curriculum to the new Minister of Education. The Ministry of Education accepted this draft and in the same year created two training programs for madrasa teachers, which also provided for practical training. One program was supervised and financed by the Islamic Organization for Education, Science and Culture , the other by the Islamic-African Center in Chartum . In 1989 control of the madrasas was transferred to the "Center for the Promotion of the Arabic Language" ( Center pour la promotion de la langue arabe - CPLA), a department of the Malian Ministry of Education.

In the countries of the Maghreb , the madrasa is one of the three levels of traditional Islamic education, which are collectively referred to as mahadra (Arabic: maḥḍara, pl .: maḥāḍir = 'meeting', 'presence' - with the teacher, host, etc.). This includes the introductory Koran school, which is referred to as Maktab or Kuttāb. Initially, it is limited exclusively to memorizing (ḥif Kor) the text of the Koran and writing it. Mahadra also includes in-depth training at the madrasa (also mahadra in the narrower sense) and the religious specialization that takes place in the zāwiya .