This article covers the Iranian city; the Iranian province of the same name is shown under Isfahan (province) .

Isfahan or Esfahan ( Persian اصفهان, DMG Eṣfahān [ esfæˈhɒːn ]) is the capital of the province of the same name in Iran with around 1.9 million inhabitants (including the surrounding area 2.2 million, as of 2016).

Isfahan experienced its heyday under the Safavid dynasty (1501–1722), who made Isfahan their capital in 1598 and embellished it with numerous magnificent buildings and gardens. The Persian play on words and proverb "Isfahan is half the world" ( Persian اصفهان نصف جهان, DMG Eṣfahān neṣf-e ǧahān ).

The city is located in central Iran, around 400 kilometers south of the capital Tehran at an altitude of 1500 meters in a river oasis in the formerly fertile valley of the Zayandeh Rud River on the edge of the Zāgros Mountains . Since the 2000s, the river had dried up for much of the year due to overexploitation and discharge, and in June 2018 there was no water in the river bed on any day of the year.

The Bakhtiari Mountains rise to the south and west of the city, and the Iranian plateau extends to the north and east , which merges into the great deserts.

In ancient Greece the place was called Γάβαι ( Gabai ). In Arab times it became Ğai , as the minting location was on the coins. In the Middle Ages, the city was called al-Yahūdiyya ("the Jewish city"), which was used to designate the Jewish settlement. The place name Isfahan (French also Ispahan ) is a sound development of Spādān of the Sassanid period, which later became Spāhān . The ending -ān is a patronymic name addition. Isfahan could therefore be derived from the name of a nobleman or ruler who owned the land and whose name began or ended with spādā ("army").

There are indications that in the area of ​​Isfahan already in pre- Amenid times an important one, around 1000 BC. Founded in BC, the city existed. Isfahan became historically tangible during the Parthian era under the name Aspadana (also: Sepahan ) as the capital of the province of Upper Persia. At the time of the Sasanids , Isfahan kept this function, but also became a mint and garrison town.

In 640 the city was conquered by the Arabs . This began the Islamic history of Isfahan and an upswing that later made the city the seat of the important Persian ruling dynasties. From the 7th to the 10th centuries, during the rule of the Umayyads and Abbasids , Isfahan, on the southern route of the Silk Road , became known for its silk and cotton . During this time there was a large Jewish quarter ( Yahudiyeh ), which, according to legend, was built at the end of the 6th century BC. Said to have originated when some Jews , whom the Babylonian king Nebuchadnezzar II had expelled from Jerusalem , settled in Isfahan. The Jewish inhabitants of Isfahan were mainly active as dyers, tanners, bathers, butchers and cobblers, as can be seen from descriptions by the chronicler Abū Nuʿaim and the geographer Yāqūt ar-Rūmī .

After the Seljuks besieged Isfahan, ruled by the Kakuyids up until then , in 1047 and 1050 and finally conquered it, it became the capital of the western Seljuks Empire ( Persia and Iraq ) in 1051 by the Greater Seljuk Tughrul Beg and remained this until the division of the Sultanate in 1118. in the mid-13th century, the city was a result of the Mongol invasion under the rule of the Mongol Empire and the Mongolian Ilchane . In 1388 the city with its then 70,000 inhabitants fell victim to the destructive rage of the Turkish-Mongolian conqueror Timur . In 1453, with the construction of the Darb-e-Imam shrine, a new cultural-historical bloom began under Jahan Shah , a representative of the Turkmen tribal federation Qara Qoyunlu . Until the end of the 15th century, Isfahan was still considered a provincial town of little importance in world history. 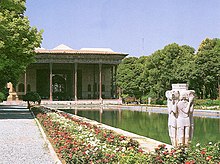 With the conquest of the city by the Safavids in 1502, the city's greatest heyday began, with around 600,000 inhabitants in the 17th century. In 1598 Isfahan became the capital of the Safavid Shah Abbas I , who brought artists and craftsmen (approx. 30,000) from all over the country to Isfahan for the expansion of the city. Many of them came from the city of Julfa and its surroundings (today in northwestern Iran on the border with Azerbaijan ) and were Christian Armenians . Shah Abbas I granted them far-reaching guarantees and privileges for their culture and religion. The Armenian quarter of Isfahan is called New Julfa in memory of the hometown . The Armenians of Isfahan form a cultural and religious community and are not only tolerated, but respected and encouraged by the Muslim inhabitants of Isfahan and the Islamic Republic of Iran.

Especially in the time of the Safavid dynasty, in the 16./17. Century, the magnificent mosques, which are still impressive today, with their large iwans (arches) typical of the Persian sacred buildings were built around Imam Square in the center of the city. Many of the great Islamic monuments are under the protection of UNESCO - World Heritage Site .

The surrounding fields were supplied with water via channels from the Zayandeh Rud. Pigeon droppings were used to fertilize the fields and for the city's leather industry. Travelers of the 17th century report of several thousand pigeon towers (Bordsch-e-Kabotar) in the vicinity of the city, of which about 100 are still preserved.

In 1722, after a long siege, Isfahan fell to rebellious Sunni Afghans . Under the subsequent Afshar , Zand and Qajar dynasties , Isfahan lost its capital status to Mashhad , Shiraz and Tehran . The major construction activity was ended by this, but in the following years the magnificent buildings of Isfahan were preserved and partially expanded.

Since 1850 Isfahan has been an eparchy of the Armenian Catholic Church with a bishopric.

Population development of the agglomeration according to the UN:

The historical cityscape is characterized by palaces, a multitude of minarets and the blue domes of the mosques . The splendid Imam Square and the 33-arch bridge (Persian: Si-o-seh pol ) over the Zayandeh Rud river are outstanding.

The Meidan-e Emām (Imam Square, formerly King Square) is over 500 meters long and is surrounded by two-storey arcades. At every turn he is adorned with a building: the splendor mosques ( Masǧed-e Emām , Lotfollah), the palace Ali Qapu ( " Sublime Porte ") and at the northern end adjoining bazaar , he is one of the biggest attractions of the Near East . He's world is one of the largest space of its kind - as well (since 2012), the much older Jameh Mosque of Isfahan - for UNESCO - World Heritage Site .

View over the Armenian quarter of Isfahan. The Vank Cathedral can be seen in the right half of the picture

The courtyard of the Abbasi Hotel

West of Imam Square is the magnificent avenue Tschahār Bāgh ( Four Gardens ), whose name comes from the rows of four trees and which is also lively designed with canals. It connects the old town with the southern districts across the Zayandeh River.

The center of the Armenian quarter (New) Julfa is the Vank Cathedral , built from 1606 to 1655. The cathedral combines Christian architecture with Persian-Islamic ornamentation and design forms and is still the religious and spiritual center of the Christian Armenians of Isfahans today . The Armenians maintain their culture and history. In April 2005, Isfahan's Armenians held a large rally to commemorate the genocide committed by the Ottomans in 1915 .

An earlier caravanserai from the time of the Safavids was rebuilt at the time of the last Shah Mohammad Reza Pahlavi to the Hotel Shah Abbas (today: Abbasi ), which, with its magnificent interior and architectural design, is one of the most impressive buildings in the city.

Other attractions are the city's lavishly designed bridges. The most famous are the 33 Arch Bridge and the Khadschu Bridge . Furthermore, the former mosque and mausoleum Monar Dschonban ( Menār-e ǧonbān ), the "swaying minarets", by Amu Abdollah Soqla is a popular sight.

Pedal boats in the shape of a swan used to be an opportunity for a ride on the Zayandeh Rud. Since around 2010, the river has been dry for most of the year due to the immensely increased drainage of a reservoir at a higher level. 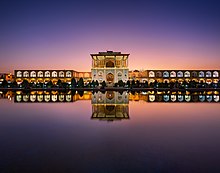 There are manufacturing facilities for the food, steel, oil and textile industries. The arts and crafts are also widespread. Isfahan is also a center of the Iranian nuclear industry with research reactors and uranium enrichment facilities .

The bazaar , which adjoins Imam Square to the north, is one of the largest and most impressive in Iran and is famous for its variety and quality of handicrafts and carpets. The fine, hand-knotted Persian carpet Isfahan is named after the city .