The city, administered as federal territory , is Malaysia's administrative, cultural and economic center and the focal point of the country's largest metropolitan region. Most residents simply call it "KL". Many cultures and religions are represented in the pulsating metropolis, you can see minarets of mosques , Christian church towers , Chinese pagodas and Indian temples throughout the city. Up to eleven million tourists visit Kuala Lumpur every year.

In addition to buildings from the city's architectural past, high-rise buildings (especially in the banking district) characterize the cityscape as a sign of Kuala Lumpur's progress. The city covers an area of ​​243.65 km² and has 1,588,750 inhabitants (as of 2010), making it the largest city in Malaysia, ahead of Subang Jaya , which is part of the metropolitan area of ​​Kuala Lumpur .

Kuala Lumpur is 35 km from the west coast of the Malaysian Peninsula at the confluence of the Gombak and Klang Rivers .

The climate in Kuala Lumpur is tropical. The maximum values ​​are all year round at 33 ° C and the minimum values ​​at 23 ° C, plus high humidity. The rainfall is distributed over the whole year and varies between 108 mm and 276 mm per month. Thunderstorms are very frequent and usually very violent, which is why flooding occurs more frequently in the city center. The stay can be depressing if, due to the still illegal deforestation and the associated forest fires, a smog bell lies over the city.

The urban population is made up of 52% Chinese, 39% Malay and 6% Indian. There are also Arabs, Sri Lankans, Europeans, Indonesians and Filipinos.

According to the 2010 Malaysian census, Buddhists make up 35.7%, Muslims 46.4%, Christians 5.8% and Hindus 8.5% of the city's population. There are also Confucians and other religions. Kuala Lumpur is the seat of the Roman Catholic Archdiocese of Kuala Lumpur .

Since 1950, the population of the agglomeration of Kuala Lumpur has increased nearly thirty-fold through natural growth and immigration from rural areas. A population of over 10 million is forecast for the year 2035. 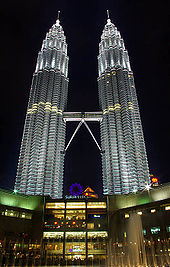 The Petronas Towers at night

The first economic activities on or near the area now known as Kuala Lumpur are known to have been in the 1840s. About ten miles north, Chinese miners were involved in the tin mining of the Selangor River. Kuala Lumpur became a city in 1857; miners (also tin miners ) under the leadership of the Malay Rajas / Rajas Abdullah founded it in the middle of the jungle. The tin trade was booming, and the town has grown steadily ever since. In 1896, under British rule, the Malay Sultanates formed the Malaya Federation , and Kuala Lumpur became the capital of the Federation. Under British rule, the city grew into an administrative center, a road network was laid out and many of the magnificent buildings that still exist today were built. In 1957 the place became the capital of the independent Malaya . Kuala Lumpur was granted city status in 1972, became a federal territory in 1974 and was given an administration that was independent of the state and sultanate of Selangor .

The city is the leading economic center of Malaysia. According to a study from 2014, the greater Kuala Lumpur area generated a gross domestic product of 171.8 billion US dollars (KKB). In the ranking of the economically strongest metropolitan regions worldwide, he came in 70th place. The GDP per capita was $ 28,076. In a ranking of the most important financial centers worldwide, Kuala Lumpur took 40th place (as of 2018).

There are two universities in Kuala Lumpur:

The football club PLUS FC is based in Kuala Lumpur.

The city is connected directly to Kuala Lumpur International Airport in Sepang by a rapid transit train ( KLIA Ekspres ) and private express buses . The journey time is 28 minutes, the trains run every 15 or 20 minutes.

Many taxis are available within the city; however, the flow of traffic suffers v. a. during rush hour under traffic jams and jams.

A public rail-bound local transport network is only just beginning to be available, the different systems are hardly interlinked and the routes, which are still too short, are not sufficient for the growing needs of the two-million city. The lines of the elevated railway or the shuttle network of the local trains ( Putra LRT , Rapid KL , KL Monorail and KTM Komuter ) all aim for the city center. On the KLIA Ekspres route, the KLIA Transit Service only controls four stations between the train station and the airport. The "Rapid KL" system (vehicles: Bombardier), which previously comprised two lines with a total of 24 km, is the nucleus of a larger system, including in the suburbs, because its medium-sized capacity and comparatively low investment costs encourage expansion.

Tickets are only valid for a single line; likewise, stops are line-specific (i.e. transfer stops are two or more individual stations that are up to five minutes' walk apart). The new central station is Kuala Lumpur Sentral , which connects all of the above-mentioned railway lines except for Rapid KL and also functions as a taxi and bus terminal.

The main bus station is in Puduraya , some express buses also go to the new "Imbi Bus Terminal" at Pasar Rakyat, which opened in January 2004.