This article explains a sub-state of Malaysia; for other meanings, see Sabah (disambiguation) .

Sabah ( Jawi :سابه, Pronunciation: [saˈbah] ; from Arabic صباح sabah , DMG ṣabāḥ  'tomorrow') is a federal state of Malaysia . Together with Sarawak it formsthe Malaysian part of the island of Borneo . Due to its location south (below) the Pacific typhoon belt, Sabah isalso known as the “land under the wind” ( Malay negeri di bawah bayu ).

Sabah is located on the northern tip of Borneo , thus north of the equator that runs through Borneo . It borders the state of Sarawak to the west and Indonesia to the south . The west coast is on the South China Sea , the north coast on the Sulu Sea and the east coast on the Celebes Sea . In Sabah there is also Borneo's northernmost point, Tanjung Simpang Mengayau , also known as the Tip of Borneo . Are offshore to the northeast, the Turtle Islands , the 1976 National Park Turtle Islands Park of Sabah was built.

In the west of Sabah are the three highest mountains in Malaysia, with 4095 m the Kinabalu is the highest in Southeast Asia, followed by the Trus Madi (2,642 m) and Tambuyukon (2,579 m). The rainforests are home to a wide variety of plants and animals. The Kinabalu National Park ( Mal. Taman Negara Kinabalu ) was declared a World Heritage Site by UNESCO in 2000 because of the rich plant diversity and unique geological , topographical and climatic conditions .

In the conflict over the Spratly Islands , Malaysia claims a total of twelve reefs to the south and currently occupies six reefs : Ardasier Reef , Dallas Reef , Erica Reef , Investigator Shoal , Mariveles Reef and Swallow Reef . Malaysia refers to the continental shelf argument ( Shelf of Sabah and Sarawak) or the 200-mile zone in its legal claims .

The area was settled by Austronesians 5000 years ago . During the 7th century the first known settlements were on the north-east coast of Borneo. In the 9th century trading with the Empire of China developed .

In 1881, Sabah was taken over by the North Borneo Chartered Company and came under European control. It formed the British Protectorate of British North Borneo . The first capital was Kudat in 1882, about 40 km from the northern tip of Borneo , which was already an outpost for trade with China during the Chinese Song Dynasty . After two years, Kudat was given up as the capital in favor of Sandakan due to the water shortage in this area . In the Madrid Protocol (1885) , an agreement between Great Britain , Germany and Spain, Spain waived in favor of Great Britain all claims in North Borneo that had previously been part of the Sulu Sultanate.

In World War II occupied Japanese forces north Borneo. The bombing by Allied forces devastated most of the cities, including Sandakan. The Japanese occupation treated the British and Australian prisoners of war with enormous brutality. All but 6 Australians died on the infamous Sandakan Death Marches . In 1946 British North Borneo was converted into a British Crown Colony .

The British Crown Colony achieved complete independence from Great Britain on August 31, 1963. 16 days later, on September 16, 1963, North Borneo united as the state of Sabah together with Sarawak and Singapore and the Malaya Federation, which has been independent since 1957, to form the new federal state of Malaysia.

The formation of the State of Malaysia led to tension with the Philippines , which claimed Sabah (part of the former Sultanate of Sulu ) as part of their national territory. They were supported by Indonesia, which finally recognized that they belong to Malaysia.

The territorial conflict over the affiliation of Sabah (" North Borneo Disput ") flared up again in February 2013, when in the so-called Lahad Datu Standoff about 200 uniformed and partly armed supporters of the Sultan of Sulu in Kg. Tanduo, about 130 kilometers west of Lahad Datu landed village and demanded a renegotiation of the membership of Sabah to the Sultanate of Sulu.

Sabah has a population of 3.1 million people (as of 2010). The population is growing rapidly, mainly due to illegal immigration from the southern provinces of the Philippines. 32 different ethnic groups live in the country. Including 13.2% Chinese speaking different Chinese dialects. The Kadazan-Dusun form the largest indigenous community, followed by Bajau and Murut. The national language Bahasa Malaysia is spoken with a special twist. The radio has programs in the indigenous languages ​​Kadazan, Dusun, Bajau and Murut.

In addition to the Islamic population, there is a large proportion of people of Christian faith (Roman Catholic and Protestant) in Sabah compared to the states on the Malay Peninsula. 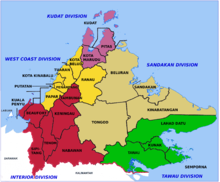 The state of Sabah is divided into five areas (divisions) . This in turn into districts (districts) divided.

After the Second World War, Sabah's economy first shifted to the logging and export of tropical timber, which led to increasing overexploitation of natural forests. Since 1982 there have been ecological approaches to preserve the remaining rainforest areas, as the rainforest was further cut down by the palm oil boom. The large-scale land use by oil palm - plantations made this industry the dominant industry in Sabah. In addition, fishery products and vegetables are exported.

Tourism is the second source of income in the country. A release station for orangutans in the southeast near Sandakan is a tourist attraction . The Kinabalu , the highest mountain in Southeast Asia, is a popular destination for foreign mountaineers. Well-known diving grounds are located on the east coast.

Many of Sabah's residents are migrant workers in mainland Malaysia, Singapore, Australia and the United States. Sabah has hardly any jobs in industry and administration for skilled workers. At the same time there are many migrant workers, especially from the Philippines and Indonesia, an estimated half a million, most of whom live in the country as illegals. They are mainly active in the oil palm plantations.