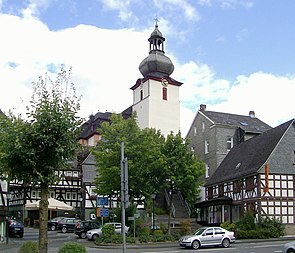 Daaden is a town in the Altenkirchen (Westerwald) district in Rhineland-Palatinate . In Daaden is the administrative seat of the Verbandsgemeinde Daaden-Herdorf , to which it also belongs. Daaden is classified as a basic center according to state planning .

Daaden is located in northern Rhineland-Palatinate on the border between Westerwald and Siegerland and borders directly on North Rhine-Westphalia in the northeast .

The Daade flows through the towns of Daaden and Biersdorf . The stream rises at the Stegenkopf and flows into the Heller near Alsdorf . In the middle of Daaden the Friedewalder Bach flows into the Daade .

The Sottersbach rises northeast of Daaden and is not far from the village, separated only by the Mühlberg . Other mountains around Daaden are the Hahnenkopf and Auf der Burg . Daaden lies at an altitude of 427  m above sea level. NHN .

In 1219 Daaden was first mentioned under "Gerardus sacerdos de Dadene". A priest named Gerhard from Daaden had sealed a document together with a pastor from Burbach in a monastery near Seck . Since the early Middle Ages, Daaden was the seat of the parish and the administration in the former Friedewald office of the County of Sayn .

Mining began in the Daade Valley in the 18th century. In 1712 the Füssenberg mine in today's Daaden-Biersdorf district was first mentioned. Up until their closure in 1965, as one of the last two mines in the Siegerland ore district , the mines shaped the economic image of Daaden and especially Biersdorf. With a depth of over 1,000 m and several million tons of iron ore extracted, the mine was also one of the larger in the entire region. Other pits were Glaskopf , Krain , Morgenstunde , Reuschenberg or Freiheit crown , which apart from Glaskopf all had little economic importance. Around 1800 an iron and copper smelter was in operation in Daaden , but it was shut down in the 1870s.

The industrial boom and with it the prosperity in the Daadetal came after the construction of the Betzdorf-Daaden line in 1884/1885.

In 1815, under Prussian administration, the Daaden mayor's office was re-established, which resembles today's Daaden community. The administrative seat was Daaden. Today's local community was created on June 7, 1969 through the formation of the previously independent communities of Biersdorf (1,616 inhabitants) and Daaden (3,150 inhabitants).

The development of the population of Daaden in relation to today's municipal area; the values ​​from 1871 to 1987 are based on censuses:

Based on a resolution by the municipal council, an application was made to the state government in July 2016 to grant city rights. The approval was given on March 7, 2017 by Interior Minister Roger Lewentz . The city charter was awarded during a city festival on June 11, 2017.

The local council in Daaden consists of 20 council members, who were elected in a personalized proportional representation in the local elections on May 26, 2019 , and the local mayor .

Daaden has had a partnership with Fontenay-le-Fleury in the French department of Yvelines since 1987 .

According to Hermann-Josef Roth, the Protestant parish church is “one of the most beautiful baroque churches in the Westerwald ”. The square west tower is reminiscent of the Romanesque predecessor building from 1136, which had to give way to the new building from 1722 to 1724. As a special feature, an angel is mounted on the top of the church tower as a weather vane.

In the main town and in the district of Biersdorf you can see some old half-timbered houses from the 18th and 19th centuries. The stone house Alte Post was originally the seat of the count's chief magistrate von Schütz, built in 1671 as a castle-like mansion by NW Simolt. The building housed the post office for 80 years, in 1979/1980 it was restored and an annex was added in which the community center is located. The Daadener Land local history museum is located in the Alte Post .

Daaden is on the state roads 280 and 285. Their expansion in the village meant that the two streams of the Emmerzhäuser Bach and the Friedewälder Bach, which merge into the Daade , are now partially underground and in some places are no longer visible.

As the seat of the association, Daaden houses its administration.

The Verbandsgemeinde Daaden maintains an indoor swimming pool in Daaden. There is also an outdoor pool run by the local community. In Daaden you will also find a skater park, a tennis court, a shooting range, an artificial turf field, a mini golf course, a beach volleyball court, a football field and two gyms (one has a climbing wall).