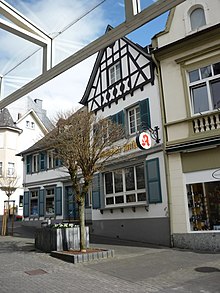 Privileged pharmacy on Wilhelmstrasse , one of the oldest buildings in Altenkirchen

Altenkirchen is located in the northwest of the low mountain range Westerwald in the natural area Altenkirchener plateau . It is located at the confluence of the Erbach in the Wied, which flows directly south of the city center .

Beyond the Wied rises the Johannisberg ( 289.3  m ), on the western elevations of which the Altenkirchener Bismarck Tower stands.

Altenkirchen has the following districts:

Altenkirchen is mentioned for the first time in 1131 in a document from Pope Innocent II , who confirmed the two courts of Birnbach and Altenkirchen to the Bonn monastery of St. Cassius and Florentius .

Already in the middle of the 12th century Altenkirchen came into the possession of the Counts of Sayn , who were the governors of the St. Cassius monastery . On December 16, 1314, King Ludwig granted the Bavarian Altenkirchen town rights . Emperor Karl IV confirmed the Altenkirchen city ​​charter on February 4, 1357, just a few days before the Almersbach in Wied, on the opposite bank of the Wied, was also granted city charter.

In the second half of the 16th century, the Diets of the Saynian Estates met in Altenkirchen in 1574 and 1584 . In 1561 the Wittenberg Reformation was introduced by the Counts of Sayn. Count Heinrich IV had Altenkirchen Castle built in 1586 , which was demolished in 1862. With him, the Counts of Sayn died out in the male line in 1606 . When on September 12, 1605 Wilhelm III. Count von Sayn-Wittgenstein-Sayn took over the government of the county, he ordered the transition to the Reformed Confession. Sayn-Wittgenstein-Sayn died out in the male line in 1636. The heirs of Sayn-Wittgenstein-Sayn divided the county in 1670. Ernestine, married to the burgrave of Kirchberg, inherited Sayn-Hachenburg , Johannette, married to Duke Johann Georg von Sachsen-Weimar-Eisenach , received Sayn-Altenkirchen . In 1670 the city fell to the Duchy of Saxony-Weimar-Eisenach. Daniel Eberlin , later Georg Philipp Telemann's father-in-law , was court musician at Altenkirchen Castle between 1665 and 1668.

During the Revolutionary Wars, on June 4, 1796, the French troops under General Kléber and the Imperial Habsburgs under the orders of Duke Ferdinand von Württemberg at the battle of Altenkirchen . During further fighting in autumn 1796 the French General Marceau was so badly wounded that he died in Altenkirchen.

On April 23, 1893, a large fire destroyed a total of 59 residential buildings, 33 outbuildings and the Protestant church, which was built between 1822 and 1827 to replace the Romanesque church according to the plans of the Berlin builder Karl Friedrich Schinkel .

Development in the 1920s on Parkstrasse, in the background on the left the new tax office

In 1939 the places Leuzbach and Bergenhausen were incorporated into Altenkirchen.

On March 7, 1945 there were several air raids that almost completely destroyed the city, killing over 200 people. 193 houses in the city were completely destroyed, 120 other buildings damaged. Both churches, the schools, the train station and the old district court building were in ruins. Wilhelmstrasse was impassable, so that the advancing American tanks reached the Weg nach Wissen over the embankment of the railway to Hachenburg . The reconstruction was not largely completed until 1965.

With the district of Altenkirchen Altenkirchen came to Rhineland-Palatinate in 1946. On June 10, 1979, the previously independent community of Dieperzen was incorporated into the Honneroth estate. The new Honneroth district was built on this area between the 1980s and 1990s.

The city ​​council in Altenkirchen consists of 22 council members, who were elected in a personalized proportional representation in the local elections on May 26, 2019 , and the honorary city ​​mayor as chairman.

Matthias Gibhardt ( SPD ) has been in office as honorary mayor of the district town of Altenkirchen since 2019 . He was elected for five years in a runoff election on June 16, 2019. His predecessor in the office of mayor was Heijo Höfer (SPD). His term of office was from 1992 to 2019.

Coat of arms and city flag

Description of the flag

The city flag is striped lengthways, red and gold, with both stripes being the same width. In the middle, the flag bears the coat of arms described above. 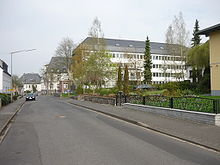 Altenkirchen maintains a partnership with the French Tarbes and the Polish municipality Olszanka in the Powiat Brzeski .

Saynstrasse with a view of the new Kreissparkasse building

As a fully equipped medium-sized center, the district town of Altenkirchen is the seat of numerous authorities and public institutions: 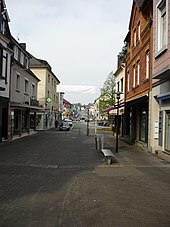 View from Wilhelmstrasse to Kölner Strasse

Since November 27, 2015 the city of Altenkirchen has been awarded the title Fair Trade City . This makes the city one of 382 cities in Germany to date with this title.

WERIT Kunststoffwerke W. Schneider GmbH & Co. KG has had its headquarters in the district town of Altenkirchen since 1949. It specializes in the production of storage and transport containers, industrial tanks, heating oil tanks and accessories for electrical installations. The Interface Solutions GmbH paper mill (formerly Ahlstrom Altenkirchen GmbH before Jagenberg ) is located in the Wiedtal between Altenkirchen and Almersbach . The bus operator Martin Becker GmbH & Co. KG , which belongs to the Rhenus Veniro Group, is also based in Altenkirchen. The company operates local public transport in the districts of Altenkirchen, Rhein-Lahn, Neuwied, in the Westerwaldkreis and also touring coaches.

The train station of Altenkirchen

The district town of Altenkirchen is located at the intersection of federal roads 8 , 256 and 414 .

The Au (Sieg) station is about 12 km from Altenkirchen located on the victory path . There is a connection to the Rhein-Sieg-Express to Aachen via Düren, Cologne and Siegburg; in the opposite direction via Betzdorf to Siegen and to the S 12 to Düren via Cologne and Siegburg.

In addition, the Holzbachtalbahn from Siershahn ends in Altenkirchen, although there has been no passenger traffic on it since 1984. The route has been used again for freight traffic since 2006.

Since August 1, 2002, the VRS tariff has been in effect in the transition to the rail routes in the Altenkirchen district. The Altenkirchen district has also been a member of the Rhein-Mosel transport association (VRM) since January 1, 2009 . The VRM tariff applies to trips within the district as well as to the Neuwied district or other districts that are members of the VRM.

The majority of regional bus traffic is carried out by Martin Becker , a company belonging to the Rhenus Veniro group . In addition to regular scheduled and travel services, kindergarten and school trips are also offered and around 7,500 schoolchildren are transported every day. 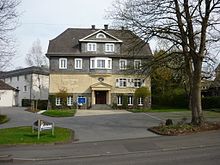 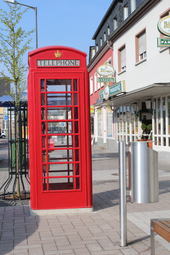 The socio-cultural center Haus Felsenkeller , which is known beyond the boundaries of the district town with its broad educational programs, conferences and its cabaret, attracts guests from near and far to Altenkirchen.

A wide range of entertaining and high-quality events is offered by the program of the town hall of the district town, which was newly built in the early 1980s.

The move of the Carnival Society Altenkirchen 1972 e. V. on Carnival Sunday, May Day on the first weekend in May, the traditional shooting festival of the Altenkirchener Schützengesellschaft 1845 e. V. at the beginning of July or the Oktoberfest are among the highlights of the year.

The Altenkirchen Christmas market emerged from the old Thomas market (Dommesmarkt) on December 21. On the last Friday of October finds Simon - Juda instead -Markt. This fair, which used to be a place where not only everyday items but also cattle were traded, was established after the great fire of 1728 and confirmed by the Prussian government in 1816.

The Jewish cemetery in Altenkirchen , the memorial ("Flammenmal") created by Erwin Wortelkamp in 1978 and erected on November 9, 1978, on the right in front of the Evangelical Church and the one on November 9, 1989, remind us of the Jewish community in Altenkirchen and the surrounding villages before 1933 A memorial plaque erected at the site of the former synagogue in Frankfurter Strasse and a memorial plaque installed in 1990 for the Jewish fellow citizens, which is located at the memorial ("Auf dem Dorn").

Fishing ponds in the Wiesental

The district town of Altenkirchen is characterized by the churches that emerged from the Reformation. Until the introduction of the Prussian Union in 1817, there was a Lutheran congregation in addition to the Reformed congregation that used the church building simultaneously. Since 1967 Altenkirchen has been the seat of the superintendent of the Altenkirchen parish , which belongs to the Evangelical Church in the Rhineland .

The Roman Catholic parish is part of the Westerwald pastoral care district of the Altenkirchen district dean in the Archdiocese of Cologne .

A Catholic church building was erected between 1851 and 1853 because the coin wing of the castle, which had been used by the community up to that point, had been closed because it was in disrepair.

The church building was destroyed in World War II. In 1950 the foundation stone was laid for a new parish church, which was consecrated on July 26, 1952 by the Archbishop of Cologne, Joseph Cardinal Frings . 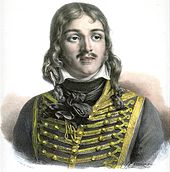 The following personalities are not born in Altenkirchen, but have worked or lived in the city: