This article covers the city in Rhineland-Palatinate. For the Danish pop singer and actress, see Anne Herdorf . 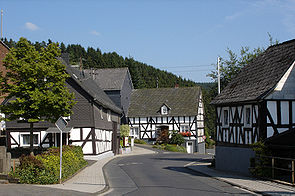 Herdorf is a town in the Hellertal , north of Daaden in the Altenkirchen (Westerwald) district in Rhineland-Palatinate . Since July 1, 2014, it has been part of the Daaden-Herdorf community , the largest of which it is with around 7,000 inhabitants. Herdorf is a state-approved resort and designated as a basic center according to state planning . The town charter Herdorf received on 24 January 1981st

The oldest mining archaeological evidence from the Herdorf area comes from the transition from the late Hallstatt to the early La Tène period (6th / 5th century BC). These are mainly cullet and slag residues.

Herdorf was first mentioned in a document in 1344. Around 1360 the place came under the rule of the Counts of Sayn . These allocated the district north of the Heller to the Freusburg office and court and the parish Kirchen and the southern district to the Friedewald office and court and the Daaden parish . Since the middle of the 17th century, Herdorf belonged to the County of Sayn-Altenkirchen after an inheritance was divided .

Due to the Reichsdeputationshauptschluss , the County of Sayn-Altenkirchen was assigned to the Principality of Nassau-Usingen in 1803 , from 1806 Herdorf belonged to the Duchy of Nassau and since 1815 to the Kingdom of Prussia . Under the Prussian administration, Herdorf belonged to the Daaden mayor's office in the Altenkirchen district, newly created in 1816, in the Koblenz administrative district, and from 1822 to the Rhine province .

Herdorf was one of the centers of mining in the Siegerland with most of the mines in a local area of ​​the Siegerland. By 1962, around 60 million tons of iron ore were mined in the Herdorf mines in 100 years . Dozens of mines have had a major impact on the region's culture and industry. The main pits were:

In addition to the pits, there was the Friedrichshütte in Herdorf , an important hut complex , the main building of which, the so-called hut house , still stands and houses a cultural hall and restaurants. The mining museum of the Altenkirchen district in the Sassenroth district has been documenting the history of mining in the Herdorf region since 1986 .

The development of the population of Herdorf in relation to today's urban area; the values ​​from 1871 to 1987 are based on censuses:

The Protestant community of Herdorf-Struthütten (part of the neighboring community of Neunkirchen in North Rhine-Westphalia) belongs to the Evangelical Church in the Rhineland .

The city ​​council in Herdorf consists of 22 council members, who were elected in the local elections on May 26, 2019 in a personalized proportional representation, and the honorary local mayor as chairman.

Herdorf has had a partnership with the French community and small town of Saint-Laurent-du-Pont since 1982 .

Herdorf is located on the of Betzdorf about Burbach according Haiger leading betzdorf-haiger railway , of the Hessian state (HLB) , area DreiLänderBahn below the line number RB 96 after the Rheinland-Pfalz clock is operated daily every hour. The BRS line R 23 Neunkirchen -Herdorf- ( Daaden ) serves the town at regular intervals , which means that Neunkirchen has connections with the R 22 to Siegen and the R 44 to Burbach. In Daaden there is a connection to the trains of the line RB 97 Daadetalbahn to Betzdorf, this line is also operated by Westerwaldbahn GmbH every hour according to the Rhineland-Palatinate cycle.

In 1934, Herdorf and Sassenroth citizens resisted the National Socialists . In a referendum on the unification of the state offices of "Reich President and Reich Chancellor", Adolf Hitler was supposed to legitimize the assumption of both offices . Nationwide, Hitler got 89% yes-votes. In Sassenroth it was only 49.7% and in Herdorf 65% of approval. As a result, the NSDAP incited against the residents and openly called for reprisals against the citizens. A banner in Herdorf read: “900 traitors here at the place! Treason is worse than murder, so wanderer stop, take such a pig! "