The title of this article is ambiguous. Further meanings are listed under Schutzbach (disambiguation) .

Schutzbach is a municipality in the Altenkirchen (Westerwald) district in Rhineland-Palatinate . It belongs to the community of Daaden-Herdorf . 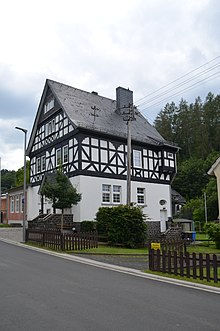 A Schutzbacher Hütte is mentioned as early as 1370 and thus an indication of ore mining and further processing is given.

Schutzbach belonged to the county of Sayn-Altenkirchen until 1806 . The village was divided, one part belonged to the parish Gebhardshain and the Amt Freusburg , the other part to the parish Daaden and the Amt Friedewald . The county of Sayn-Altenkirchen came to Prussia by inheritance in 1791 and was awarded to the Principality of Nassau-Usingen in 1803 in the Reichsdeputationshauptschluss . In 1806 the two Nassau princes joined the Napoleonic Rhine Confederation , so that from 1806 the region belonged to the Duchy of Nassau . A participant in the Congress of Vienna made (1815) agreements, the territory of the former saynischen counties was to the Kingdom of Prussia ceded .

Under the Prussian administration, Schutzbach was assigned to the Daaden mayor's office in the newly established Altenkirchen district , which belonged to the Rhine Province from 1822 onwards.

The development of the population of Schutzbach, the values ​​from 1871 to 1987 are based on censuses:

The municipal council in Schutzbach consists of eight council members, who were elected by a majority vote in the local elections on May 26, 2019 , and the honorary local mayor as chairman.

Detlef Faikus is the local mayor of Schutzbach. In the direct election on May 26, 2019, he was confirmed in his office with 82.93% of the votes.

An iron works and a hammer mill existed on the Daade until around 1800. Ore was mined in several mines on the slopes surrounding the village. Some of the remains of the tunnels are still visible.

Schutzbach is the only known German place of discovery of the mineral Euchroit so far .

In Schutzbach there is a stop of the Daadetalbahn , on which the trains of the line RB97 of the Westerwaldbahn GmbH (WEBA) run daily approx. Every hour from Betzdorf to Daaden according to the Rhineland-Palatinate cycle . At the Betzdorf (Sieg) train station there are connections to the Rhein-Sieg-Express (RE9) (Aachen-Düren-Cologne-Siegburg / Bonn-Au (Sieg) -Siegen), to the RB 95 (Au (Sieg) -Siegen) and to the RB96 (Hellertalbahn) (Betzdorf (Sieg) -Herdorf-Haiger-Dillenburg).

In the place are in the sports area of SV 70 Schutzbach e. V. and the chess club "Königsspringer" Schutzbach active in 1965 . The Heimatverein Schutzbach e. V. has set itself the task of "promoting and maintaining the idea of ​​home and the village community".