The title of this article is ambiguous. Further meanings are listed under Betzdorf (disambiguation) .

Betzdorf is a town in the Altenkirchen district in the northern part of Rhineland-Palatinate . It is the administrative seat of the Betzdorf-Gebhardshain community . Betzdorf is a railway town and designated as a medium-sized center according to state planning .

The city of Betzdorf is located about 20 km southwest of Siegen in a basin between Westerwald in the south and Siegerland in the north. Here the river Heller flows into the Sieg . Betzdorf is the largest city in the Altenkirchen district.

The districts of Bruche, Dauersberg and Struthof belong to the city .

The first reliable documented mention of Betzdorf was in 1249 on a document from Countess Mechthild von Sayn .

The growth of the initially not very important place only began with the construction of the Cologne-Deutz / Gießen railway line with a branch line from Betzdorf to Siegen , making Betzdorf a hub and railway town with a marshalling yard for the surrounding iron ore mines . In 1882, the neo-Gothic St. Ignatius Church was completed for the growing Catholic community .

On April 1, 1886, the municipalities of Betzdorf, Alsdorf (Westerwald) , Grünebach , Sassenroth , Dauersberg , Scheuerfeld , Bruche and Wallmenroth separated from the mayor's office in Kirchen (Sieg) . The municipality of Bruche was incorporated into Betzdorf in 1907. In 1935 the mayor's offices were renamed to offices. Its importance as a railway junction resulted in heavy air raids during World War II , which destroyed two thirds of the city by bombs. On March 12, 1945, 61 people were killed in an air raid. This attack was carried out by the US 8th Air Force using B-17 bombers.

After the Allied forces broke out of the Remagen bridgehead at the end of March 1945, units of the First United States Army came across the Sieg near Betzdorf in April 1945 and formed a bridgehead in the Hohenbetzdorf-Molzberg area. In this area fierce fighting developed between the American and German divisions, in the course of which many soldiers on both sides lost their lives. The battles around Betzdorf lasted until April 6, 1945. The opponents were the 8th and 78th Infantry Divisions on the American side and the 59th Infantry Division on the German side.

1953 Betzdorf became titular town . In the following years, almost all Betzdorf railway systems and facilities, such as the repair shop , the railway depot , the Federal Railroad Operations Office, the marshalling yard , the railway maintenance office, the telecommunications maintenance department, the station administration and goods handling , were shut down, so that Betzdorf is now only used for passenger transport is a small railway junction .

On June 7, 1969, the previously independent community of Dauersberg was incorporated into Betzdorf.

The development of the population of Betzdorf in relation to today's urban area; the values ​​from 1871 to 1987 are based on censuses:

The city ​​council in Betzdorf consists of 28 council members, who were elected in a personalized proportional representation in the local elections on May 26, 2019 , and the honorary city ​​mayor as chairman.

Mayor of the Betzdorf-Gebhardshain community is Bernd Brato ( SPD ). He came in November 2006 through direct elections to the two offices of city mayor for the city of Betzdorf, as well as mayor for the municipality, which he took up in January 2007. He resigned from his position on May 26, 2019. In the local elections that followed, Benjamin Geldsetzer (also SPD) was elected to the office of mayor with 57.6%.

The city of Betzdorf maintains partnerships with the cities

View of the train station, Betzdorf-Hohenbetzdorf and the Molzberg in the background 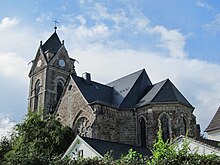 Furthermore, the Betzdorf City Night takes place every two years , a cycle race through the Betzdorf city center, which is occupied by well-known cyclists. 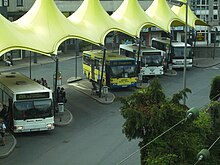 The city Betzdorf is a railway junction in the transport with access to the local rail -lines:

Before the Asdorftalbahn was shut down , there were also passenger trains from Betzdorf to Freudenberg and Olpe / Dieringhausen .

Alternatively, various bus lines run from the bus station in the center of the city by four transport companies that connect neighboring communities and other districts. Most trips serve as school trips, which is why they mainly only run in the morning and early noon. Since the state border with North Rhine-Westphalia is not far away, communities and districts are inevitably also served there.

Betzdorf is about 20 kilometers off the A 45 on the federal highway 62 . The nearest regional airport is Siegerland Airport ; the next international airports Cologne / Bonn and Frankfurt can be reached by train. The Betzdorf-Kirchen airfield is 4 kilometers northwest of Betzdorf.

In Betzdorf there are two primary schools , the Bertha-von-Suttner Realschule plus , the Integrated Comprehensive School Geschwister Scholl Betzdorf-Kirchen, the Freiherr-vom-Stein-Gymnasium as well as a vocational school , a library and an adult education center .

In addition to several smaller sports fields, there is the Eurogreen stadium “Auf dem Bühl” in Betzdorf , which serves as the home stadium of SG 06 Betzdorf and is owned by the city, as well as the Molzberg leisure sports facility, which belongs to the Betzdorf-Gebhardshain community and the Kirchen community . The Molzberg leisure pool is also operated by the two municipalities .

A few kilometers south of the city center there is a substation named after the nearby district of Dauersberg , which contains switchgear for 380, 220 and 110 kV. It is one of the largest nodes in the German energy supply network , where a large part of the high-voltage lines connecting the Rhine-Ruhr and Rhine-Main metropolitan regions converge.

Betzdorf owned the largest Easter egg in Germany, which was located at the entrance to the village on the B 62 (coming from Kirchen). It came to a height of 9.27 m and a diameter of 5.71 m. The Easter egg was created in spring 2008 as part of the “City Talks Betzdorf”. Since it was damaged several times by vandals, it was finally wrapped in a large jute cloth until it was finally removed in October 2011.