Railway nodes are crossings and links in the rail transport system that are required for the infrastructure as route nodes and crossings or for operational processes for train provision or linking with other modes of transport . Similar names for this are railway junction , railway junction , junction station , abutment station or rail cross .

For passenger traffic, train stations are usually created at these nodes, which are differentiated according to the type of route they are connected to and their location in the route network. The connection to other modes of transport results in interface functions that are fulfilled, for example, by port stations or airport stations. Railway nodes can gain additional importance for operational processes if they serve as train formation systems for passenger and freight traffic (provision and marshalling yard).

Importance of the railway nodes

In an extensive and dense rail network , a large number of structural and functional railway nodes have arisen, from simple junctions to crossings of one or more routes to large node areas with a large number of nodes and operational links. The central function of railway nodes is to link the train flows on the various routes while maintaining quality standards with the highest possible capacity. In passenger transport, the accessibility and punctuality of connecting trains as well as the capacity at peak times are the focus of interest. In freight transport, the focus is on the continuity of the nodes with the lowest possible waiting time. Mixed passenger and freight traffic therefore pose particular challenges for railway hubs.

Structure of the railway node

Most of the railway junctions have grown over time and their spatial and structural design has been shaped by different urban and topographical constraints. There are numerous variants for routing trains in nodes and the time dependencies, so that rail nodes have very individual structures that make it difficult to assign them to certain groups.

The type of route link is a distinguishing feature:

View of Hamburg Central Station from the south (Altmannbrücke)

History of the railroad nodes

Earlestown station in Newton-le-Willows ( Merseyside , Great Britain) is the world's first railway junction . Here on July 25, 1831, the lines of the Liverpool and Manchester Railway and the Warrington and Newton Railway were connected in the station with the then name Newton Junction .

Crewe established itself as a further important railway junction from 1837 and later, like Newton-le-Willows, became a railway town . Further railway nodes were created in the British capital London and in other large cities. 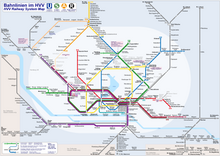 The Fürth Crossing 1845, an early railway junction between the first German railway and the Ludwig-Süd-Nord-Bahn

Germany's first railway junction was built in Köthen (Anhalt) on September 10, 1841, when the Berlin-Anhalt Railway met the main line of the Magdeburg-Leipzig Railway Company , which was completed the previous year . The Köthen station became Germany's first transfer point, the importance of which grew when the line of the newly built Anhalt-Köthen-Bernburg railway from Bernburg (Saale) was connected to Köthen in 1846 . The latter was later merged with the Magdeburg-Halberstädter Eisenbahngesellschaft , which required the construction of a fourth station. Even before the end of the century, routes in the direction of Aken (Elbe) and Radegast were added, so that Köthen could now be reached from six directions.

In the past, railway junctions were treated as secondary in operational and expansion planning. With the basic plan " Netz 21 ", Deutsche Bahn AG intends to unbundle fast and slow traffic - the separation of passenger and freight traffic. This inevitably increases the importance of the railway nodes as collection and distribution points. In the expansion planning of the rail network, the performance of the nodes is now assigned a decisive role (see node expansion measures ).

The most important German rail hubs for freight traffic are the locations of the most important marshalling yards: Maschen Rbf (near Hamburg ), Seelze Rbf (near Hanover ), Hagen-Vorhalle , Gremberg (in Cologne ), Mannheim Rbf and Nürnberg Rbf . The Dresden railway junction brings together freight traffic from different directions in Germany and transfers it to the Czech Republic via the Elbe Valley Railway .

Junction stations that are not on a main line are referred to as branch line nodes. Due to the strong "retreat from the area" due to line closures of the German Federal Railroad since the post-war years, most of them have lost their transport significance or even the rail transport as a whole. Examples include green city in Rhineland-Palatinate, the Gummersbach-Dieringhausen with depot in Gummersbach or stop (Halver) in Wipperfurth in North Rhine-Westphalia .

According to the traffic tasks, the following station types are distinguished in the nodes:

as well as works stations and the closed, historical general cargo stations.

The railway junctions are subdivided according to their size into the simple crossings of two lines, the "big junctions" with crossings or links between several lines and functional areas and the "big junction areas", in which a large number of junctions and operational links are located. A distinction is made in the Deutsche Bahn AG network: 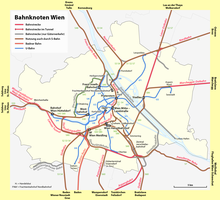 Map of the Vienna railway junction

Other important railway nodes in the Austrian railway network are located in the provincial capitals Graz , Linz , Salzburg , Innsbruck and Klagenfurt ; only the stations in Bregenz and Eisenstadt are not railway hubs.

The most important railway hubs for passenger traffic in Switzerland are the main train stations in Basel SBB , Bern and Zurich HB , followed by the train stations Arth-Goldau , Biel , Buchs SG , Lausanne , Lucerne , Olten , Rotkreuz , Brugg and Winterthur HB . The Genève-Cornavin station in the city of Geneva is not a railway junction in the strict sense of the word, but serves as a border station to France in addition to local traffic .

The capacity of railway nodes sometimes limits the performance of a railway network more than the capacity of the lines. This applies all the more, the denser the network and the higher the traffic load on the nodes. Node expansions can therefore achieve greater capacity increases in existing networks with comparatively little investment than new routes or expansions. The capacity of a railway junction can be increased primarily through construction measures such as the installation of points that are suitable for higher speeds or avoidance of point crossings through the construction of overpasses and signaling measures, e.g. B. self- setting , train steering , enabling parallel entrances, simplified route part resolution.

In complex nodes, such construction measures can be very extensive and thus costly, especially if there are capacity restrictions through tunnels ( Mainz railway tunnel ), bridges ( Hohenzollern Bridge , Cologne) or inner-city routes (Berlin).

In the expansion planning of the rail network, the performance of the nodes is now assigned a decisive role, as can be seen, for example, in the two current basic studies on the rail network expansion (e.g. the German review of the requirements plan for the federal railways of the Federal Ministry of Transport, Building and Urban Development and the rail network 2025/2030 : Development concept for efficient rail freight transport in Germany by the Federal Environment Agency).