This article deals with the utility structure in general. For information on individual substations, see substation (explanation of terms ) .

General view of a substation near Keetmanshoop

A substation (also known as a substation ) is part of the electrical supply network of an energy supply company and is used to connect different voltage levels . In addition to power transformers, substations always consist of switchgear , constructed as an open-air switchgear or in an encapsulated form as a gas-insulated switchgear and other devices for measuring and control technology. Systems without transformers are also referred to as load distribution plants (load distribution or switchgear).

Substation near Pforzheim with 220/110/20 kV transformers

Due to the high degree of automation, the operation in many substations, such as the execution of switching operations, takes place fully automatically on site.

Substation in Russia, near Ljantor 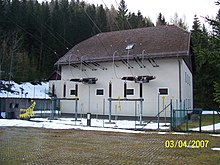 In addition to the transformers required for the transformation, the substation also has switchgear for the high and low voltage lines. The technical equipment ( power transformers , busbars, etc.) as well as the lines are usually designed redundantly , so that the supply is still guaranteed in the event of a failure of an item of equipment .

Circuit breakers, current transducers and disconnectors in the Aschaffenburg-Schweinheim substation

The term secondary technology includes the equipment of a substation that is not directly involved in the transformation. However, this includes functions that are very important for operation, such as:

A special form of a substation (UW) is the simplified substation (VUW). While the lines and transformers are switched on busbars in the most common conventional substations , in simplified substations i. d. Usually there are no busbars on the high-voltage side. In this case, the lines are only connected directly to the transformer via disconnectors and circuit breakers . A coupling between the lines is possible. VUWs are used to save costs when there are only a few (two to three) lines on the high-voltage side (omission of the busbar and thus savings on busbar disconnectors).

This fact also gives rise to the disadvantages of VUWs: Since there is no busbar as a "distributor", if a line fails, the connected transformer would also become useless (with VUW without coupling between the lines). The failure of system parts or lines is more complicated to compensate for. Subsequent expansion of the system is only possible to a limited extent. If an additional line is to be connected, an additional coupling (if this is important) and / or an additional transformer is required. With several additional lines, the cost advantage is therefore quickly used up. In such a case, the VUW often becomes a conventional substation by installing a busbar.

In the case of large substations for several voltage levels above 100 kV, it is sometimes necessary to accommodate the system in several separate areas in the immediate vicinity, which are connected to one another via coupling lines. As a rule, each area contains the complete switchgear - mostly including the transformers - for this level and is completely fenced in. The line connection between the system parts is usually made via overhead lines, less often via underground cables. Examples of such divided substations are the Hoheneck substation in Ludwigsburg and the substation in the Krone von Witten district.

Listings of switchgears and substations can be found in the following lists: