Elkenroth is a municipality in the Altenkirchen (Westerwald) district in Rhineland-Palatinate . It belongs to the Betzdorf-Gebhardshain community . The place is called "Elgert" in dialect.

The community is located in the Westerwald between Betzdorf and Hachenburg on the northern edge of the "Neunkhausen Plateau". The highest elevation in the district is the Hasselichskopf (508 m above sea level). Neighboring communities are Dickendorf and Kausen in the north-west, Weitefeld in the east, Neunkhausen in the south-east, Nauroth in the south and Rosenheim in the south-west.

The first documentary mention as "Elkerode" comes from a Marienstatter certificate from 1370.

Due to the agreements made at the Congress of Vienna (1815), the region was ceded to the Kingdom of Prussia . Under the Prussian administration, Elkenroth was assigned to the mayor's office in Gebhardshain in the newly established Altenkirchen district ( Koblenz district ), which belonged to the Rhine province from 1822 onwards.

Elkenroth has been part of Rhineland-Palatinate since the state was founded . 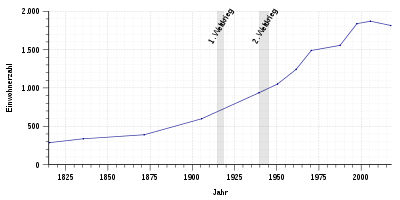 The development of the population of Elkenroth, the values ​​from 1871 to 1987 are based on censuses:

The local council in Elkenroth consists of 16 council members, who were elected in a personalized proportional representation in the local elections on May 26, 2019 , and the honorary local mayor as chairman.

The Elkenrother Weiher is an artificially created pond in the "Weidenbruch" nature reserve in the Elkenroth district. Its origins go back to several fish ponds laid out one behind the other in the Middle Ages on the upper reaches of the Elbbach between Elkenroth and Weitefeld. Today there is an educational trail of the fishing club, which they laid out around the pond a few years ago. The built fisherman's hut not only serves the local fishing club, but also invites you to take a break in the local recreation area. The Elkenrother "Backhaus" is also a sight that the local community of Elkenroth has to offer. In addition, the local community of Elkenroth has a DFB mini football pitch. The centrifugal wheels of the former sand mill on Weitefelder Straße are set up in Steinbornpark.

The 300 m long bridge spanning the Elbbachtal near Elkenroth is one of the largest state road bridges in Rhineland-Palatinate.

The station Elke Roth was on a branch of the railway line Scheuerfeld-Emmerzhausen .