Documents of the Middle Ages and the Early Modern Age

The documents of the Middle Ages and the Early Modern Era are central sources for historical studies until the creation of comprehensive written documentation of the administration ( files ) in the first half of the 15th century . The special science , located among the historical auxiliary sciences that deals with these and other documents, is diplomatics . The documents provide information about political activities, about the law, about the constitution or economic life. Many documents have been lost over the centuries, so that the few documents that have survived in the original are examined and interpreted particularly thoroughly and scientifically published in the text genre of the document book .

In historical studies, a document from this period, i.e. approximately from the 3rd / 4th From the 19th century to the 18th century, a form of written record that changes according to time and person, which provides evidence of events of a legal nature (definition based on Harry Bresslau , Handbuch der Urkundenlehre ). 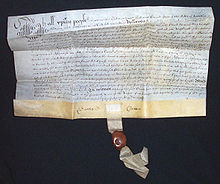 Certificate with seal from 1638

The following persons (groups) are associated with each certificate:

It can be assumed that the majority of the documents were only issued at the instigation of the recipient. This petitioner turned to the document issuer (ruler, city, court, aristocrat) - often with the support of a person close to the issuer ( intervener ), who advised on the legal issue and commissioned certain responsible persons in his vicinity to issue the document. This notarial office is called a chancellery ; the similarity of the characteristics of all documents issued from the same office in a certain period of time is called office-like . The text of a document is called a dictation (from the Latin dictare = to conceive), so the author is called a dictator. The dictator does not have to be the same as the writer.

The copy of a document that was handed over to the recipient by order or with the permission of the exhibitor is called the original (=  autograph , in the older legal doctrine also: Authenticum ). The drafting of the text of a certificate is called a concept . Other handwritten texts of documents that cannot be regarded as originals or concepts within the meaning of this definition are referred to as copies and their value is graded. (Whether certified copies can be considered originals is controversial. They are usually referred to as secondary pieces .)

A document from the Middle Ages and the early modern period can be used as an original, as a concept (then possibly with corrections, deletions, etc. that are important for research), as a copy or transcript or as an entry in a register ( e.g. in copy books , cartularia , traditional books ) or in greatest stroke of luck in all these forms.

Documents that have not been received, the content of which is known from other sources (historical works or documents issued later), are called Deperdita .

One can roughly distinguish the following documents from the Middle Ages and the early modern period (the boundaries are fluid):

According to the legal content of the documents, the following variants can be distinguished:

An imperial charter had the following structure:

The documents of the German kings and emperors have been issued as part of the Monumenta Germaniae Historica (MGH) since the 19th century in the Diplomata series (abbreviated as MGH-DD).