This article is about handwritten writings. For the measuring instruments see stereo autograph and sunshine autograph . 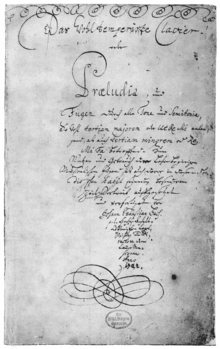 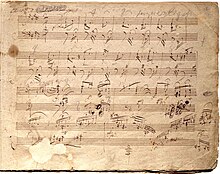 The autograph , also called autograph , is the handwritten writing of an author (usually a famous personality) or a composer . As a public and private collector's item, autographs are particularly valued when they have a signature .

The mere handwritten signature is called an autograph , especially the signature of a celebrity.

Not only for medieval authors is the existence of the handwritten writing of great text-critical importance for the edition .

Autographs of famous personalities have been collected since the 16th century, and in some cases they did not shy away from removing signatures or other handwritten lettering from their original context, for example by cutting them out of the documents or by removing pages from the register . One example is the Dresden Reformers' Bible .

The large autograph collectors include a. Johann Wolfgang von Goethe and Stefan Zweig as well as Karl August Varnhagen von Ense , Eduard Mörike , Johannes Brahms and Elise von Koenig-Warthausen (1835–1921). Even Karl von Holtei collected autographs. A special collection area are the family books (album amicorum) that have been in fashion since the 16th century .

Archives and libraries traditionally differ in the way they treat autographs. While handwritten documents such as letters from rulers remain in archives in the context of files and are usually not cataloged separately, the autographs are recorded individually in libraries, for example in estate holdings . Since 1966 autographs have been reported to the “Central Card Index of Autographs” (ZKA). In recent times it has been possible to record autographs and personal papers directly in the central database of the Kalliope network using a client .

Various autograph collections have been digitized in whole or in part for a number of years and made available on the Internet.

Autographs are sold by second-hand bookshops . The world's leading auction house for autographs in Germany is the autograph dealer JA Stargardt in Berlin (founded in 1830). Special antiquarian stores are Kotte Autographs GmbH (Roßhaupten) in Germany and Les Autographes Thierry Bourdin (Paris) in France. In Austria, the company Gilhofer & Ranschburg, founded in Vienna in 1883, was a leader for a long time and is now represented by its successor, Inlibris, Gilhofer Nfg .